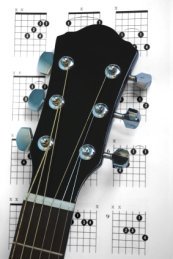 Only then will you truly know how to apply chords in your own music and how they relate to other theoretical elements, such as scales.

Don't worry though, it's not difficult. Any chord theory I cover is broken down into simple steps and I only teach you what is absolutely necessary for you to reach your full playing potential. So you get all the chord charts you'd expect, but with that little bit extra along the way!

Basic Guitar Chords  The best place to begin your chord learning journey. 5 part course that takes you through the main open position chords and their interesting variations. Some of the most loved music out there exclusively uses the chords in this course and you'll probably use them for your entire guitar playing life.

Power Chords  Power chords are not strictly chords, rather two notes played together (dyads). However, they are played in the same context as chords. Power chords are used religiously in rock and heavy metal and sound great with gain/distortion turned up. Very easy to play, and a good primer for the chord forms we'll come to later. Also in this series...

Barre Chords  Learn how to play guitar chords away from the first few frets to completely dominate the fretboard. Get introduced to the main barre chord shapes and use the exercises to gain physical confidence with playing them. Also in this series...

Major 7th Chords  Often described as a "dreamier", more "soulful" type of major chord. Learn the basics of maj7 and how to use it in major and minor key progressions. See also...

Slash Chords  Learn how to change the bass note of those familiar open chords to create new sounds and songwriting ideas. Especially useful if you're playing solo, without accompaniment (e.g. fingerstyle). See also...

Chord Root Notes  Introduces you to the theory behind how root notes work in forming guitar chords. The root note is the note that gives a chord its tonal center. In other words, once you know the root note is for a given chord, you can apply that chord in several positions and therefore create several voicings for the same chord.

Simplified/Shell Chords  Cut down those barre chord forms to create tighter, punchier and more economical chord voicings. This lesson takes you through the most important shapes and some exercises demonstrating ways in which you can use them in your own music.

Movable Open Chords  This series of lessons expands on the open chord shapes from earlier, moving them up the fretboard and using open strings to create unique, beautiful sounding chords. Expand your chord vocabulary even further.

Dark / Tension Chords  A unique chord chart that explores the darker side of chord playing! A great first step in learning how to create tension in your songs.

Blues Chords  Chord charts of the most common (and some less so) blues chord forms in different positions. Plus, a look at some typical chord phrasing variations and turnarounds used in blues.

Suspended Chords  Try replacing instances of major and minor chords with suspended chords for more creative options. Learn how and when to play them in your chord progressions.

Diminished 7th Chords  Learn how to use the "symmetry" of diminished 7th chords to play them anywhere on the neck. Plus examples of how dim7 chords can function in your progressions.

Augmented Chords  Learn how to play these wonderful chords and some of the common functions of augmented chords in progressions. Charts and audio examples included.

Metal Guitar Chords  Modify and add to those basic root-5th powerchords commonly used in metal and you'll have tons more options for making your metal more melodic. Looks at cut down 9th, diminished, suspended and other forms commonly used in heavy metal.

Guitar Chord Theory  This course is for those guitarists who want to understand how chords are constructed and where they "come from". Really adds a new perspective to learning chords on the guitar, showing you how to effectively build your own chords from scratch. Also in this series...

Major Chord Colouring  Learn how to use the CAGED system to create colourful, extended major voicings across the neck. Here we learn that by omitting the bass root and even 5th from the chord (which would be covered by other instruments) we can free up our fingers to focus on the "colour tones" of the chord for accompaniment.

Chord Melody  Give your chord playing a lead voice by adding melodic lines/phrases around your shapes and learn how to harmonize melody in multiple parts. We start with open chords and then move up the neck...

Transpose Guitar Chords  Learn how to transpose chord progressions from one key to another using 3 quick and simple methods. This is useful for a number of things, one example being if you need to play a song in a more comfortable register for the vocals. 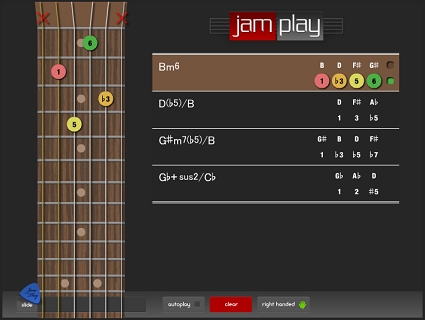 Looking for the name of a chord? Want to discover some new chords?

Simply point and click on the fretboard to make a chord, hear it being played and see the notes and intervals that make it up.

A very useful tool for guitarists of all levels...

Go to the Chord Finder Here