Suspended Guitar Chords - How & When To Play Them

Suspended chords play a prominant role in shaping harmony in all forms of music. Spend some time getting to know their sound and function.

This lesson will show you how to play suspended chords on guitar and offer some tried and tested ideas for using them in your songwriting.

The video below will get you started. Even if you're already familiar with "sus" chords, you may find some fresh sounds and ideas for using them in your own songs...

Suspended chords occur when the 3rd has been replaced with a perfect 4th (4) or major 2nd (2) interval.

So when you see the word "suspended", or its abbreviation "sus", that translates as "no 3rd".

The result is a feeling of suspense (especially with sus4 chords), a more "open" and ambiguous sound than the more resolved major and minor chords.

See the tables below for the most common types of suspended chord and how they're constructed...


Note: Sometimes they'll be written without the 4. If, for example, you see "Csus", presume it to be a "sus4".


Note: We don't have a "9th suspended 2nd" chord because the 9th and 2nd are the same note!

Here you can learn how to form suspended chords on the guitar fretboard, both in the open position and movable shapes. The fingerings are only suggestions. Feel free to adjust! 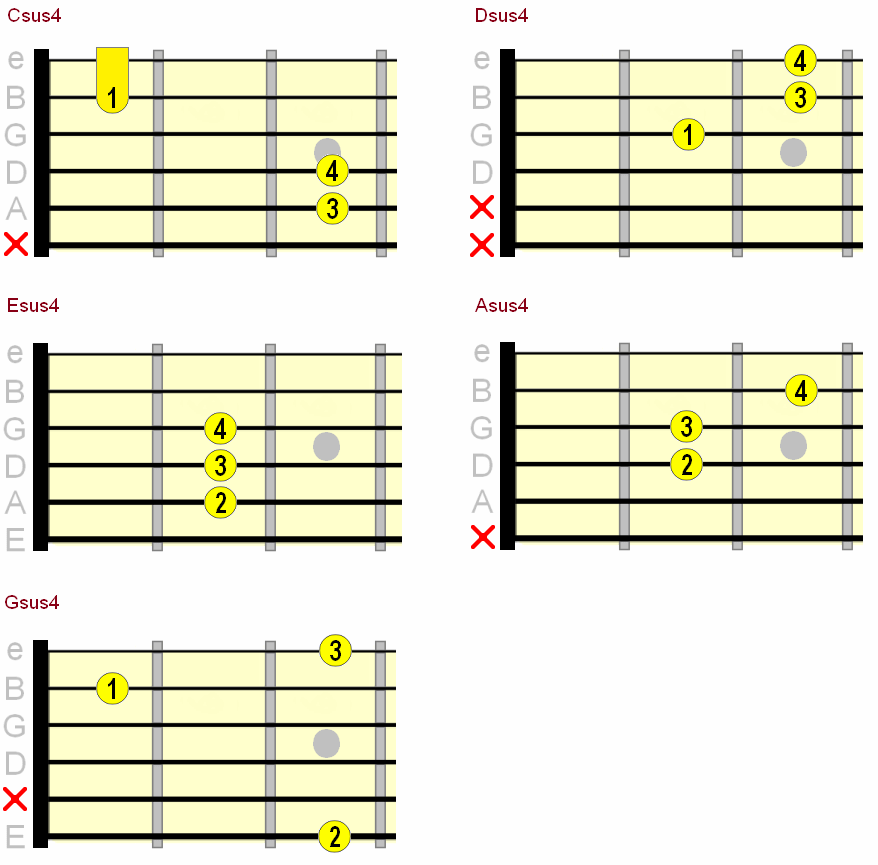 Position these shapes anywhere up the neck, on the root you want... 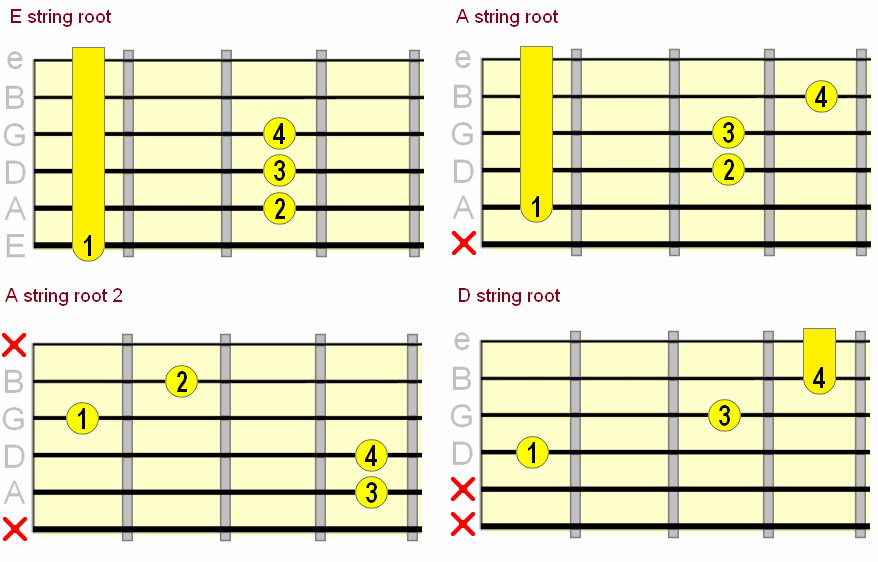 The addition of the minor (dominant) 7th gives the sus4 chord more depth and colour... 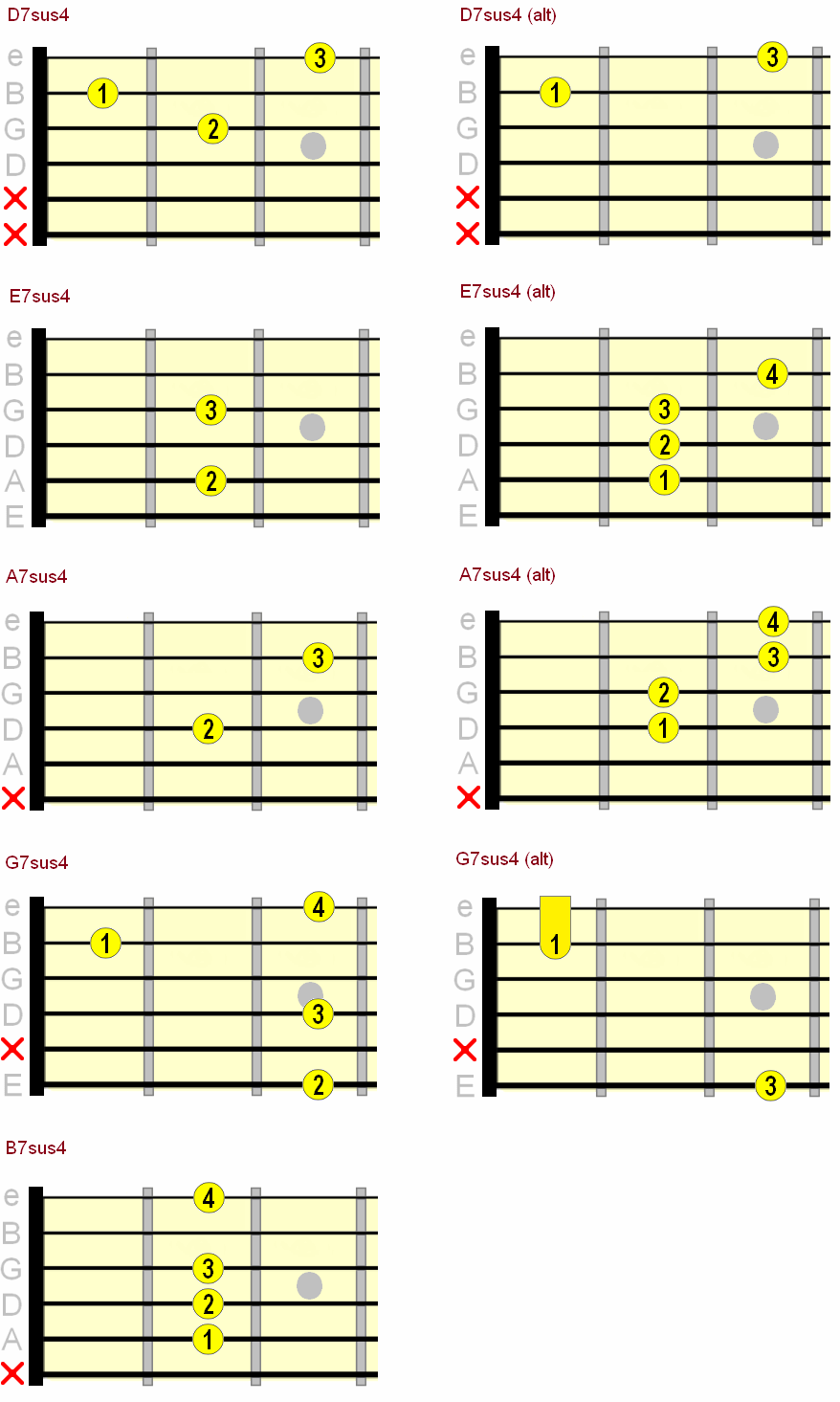 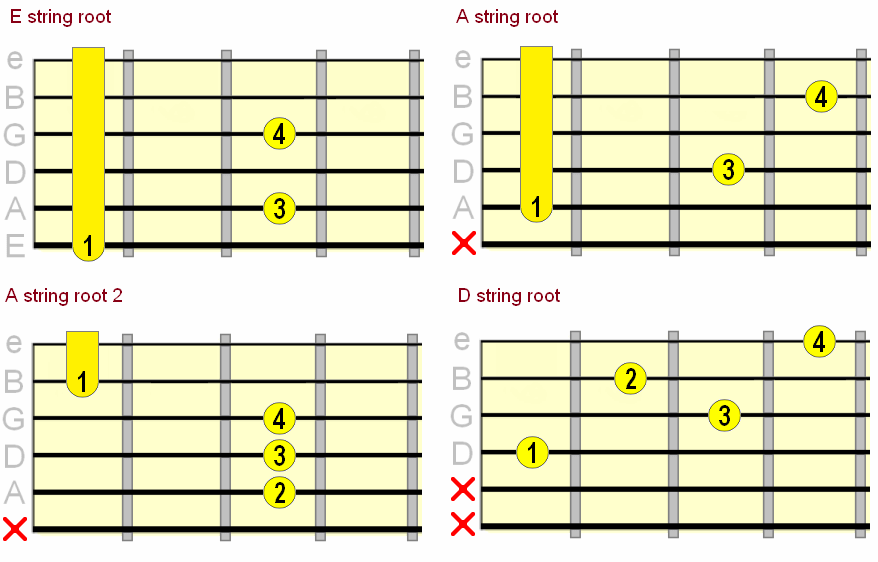 We can extend the 7sus4 chords to include additional tones, such as the 9th and 13th, for even more colour. These are most commonly used in jazz, soul and funk, but they would sound great in any style. 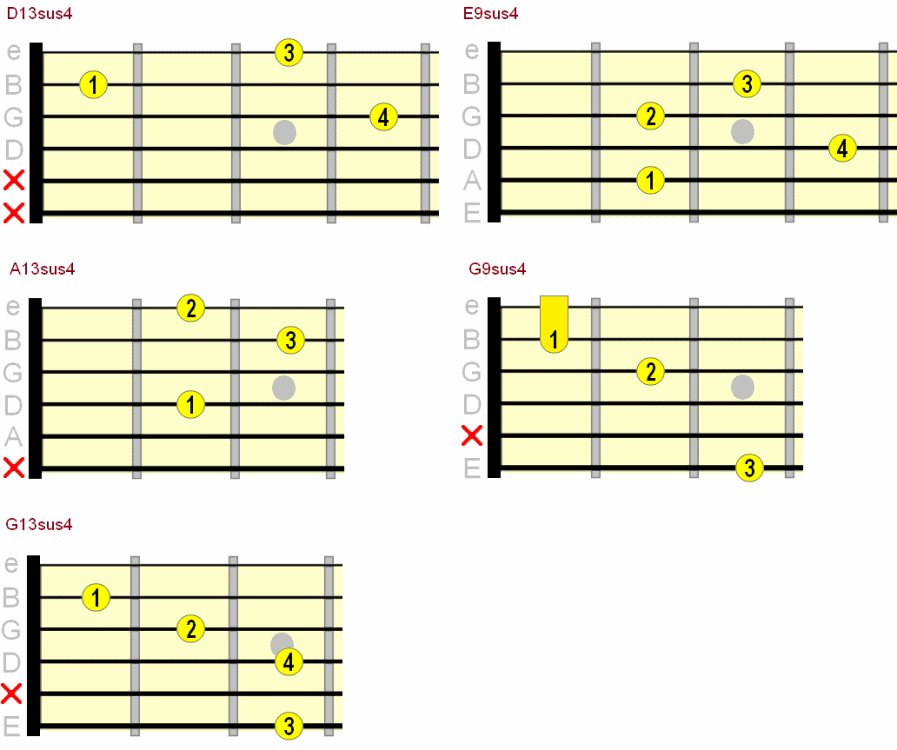 The first "A string root" shape is not an error! Simply barre your index finger across the five strings to get a deep and soulful sus4 sound... 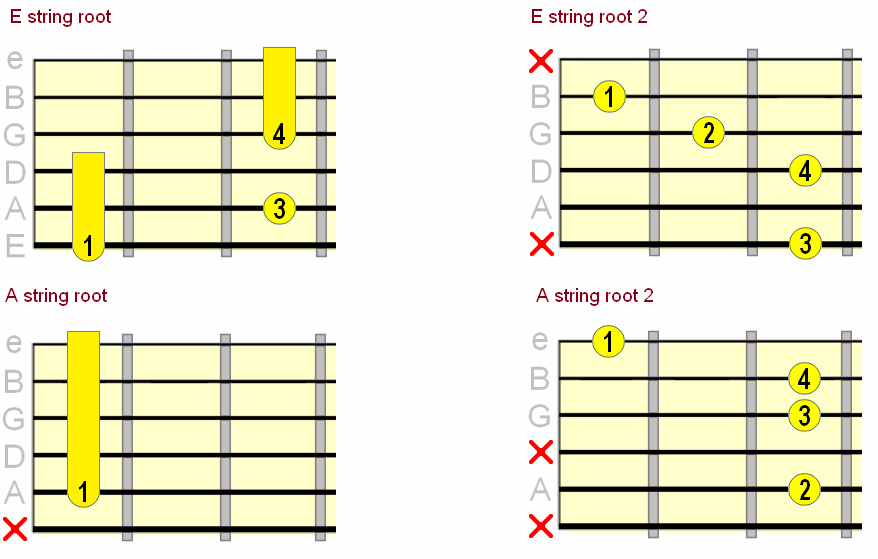 Try these sus2 chords in place of major and minor chords for a more "open" sound... 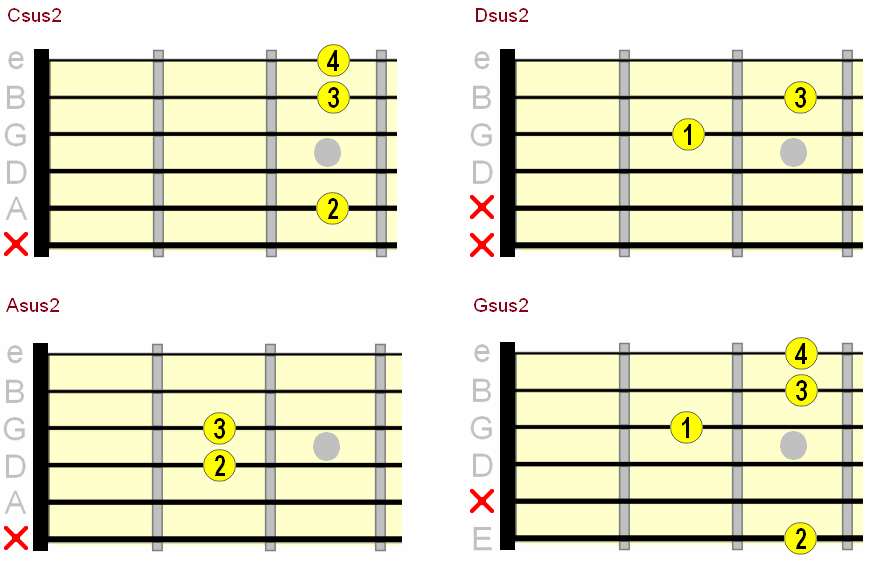 A nice variation on the above chords, with the major 7th adding some extra colour...

Let's look at some ways in which suspended chords can function in our songs...

Sus4 in place of major/minor chords

The sus4 chord has a neutral sound, so you'll find it can replace most instances of a major or minor chord. Try "swapping" different chords in your progressions for sus4 and 7sus4 chords. For example...

Sometimes, you might want to resolve the sus4 to a major/minor chord on the same root...

Take a listen to how the Stone Temple Pilots use this sus4 - maj movement in the climax of their song Big Empty (starts at 2:42). You can hear a movement from E7sus4 to E7 right before he sings "conversations kill".

So you have the choice of either holding the sus4 through the chord, or resolve the 4 to a b3 (minor) or 3 (major).

You'll often hear sus4 being used in the tonic position. That's the chord we might call "home" in our progression/key. Typically, this sus4 is resolved to the natural tonic chord, whether major or minor. For example...

In countless songs, you'll hear an interchange between the tonic major/minor and a sus4 on the same root. One example is the opening to Queen's Crazy Little Thing Called Love. Another is Sheryl Crow's If It Makes You Happy.

In music theory, the V (5) chord is a strong point of tension before the "return home" back to the tonic (1) chord of the key.

Using a suspended 4th chord (including its extensions) on this V position can serve to enhance that tension. The table below shows you the relationship between the tonic and V chords in several common keys. It can work in both major and minor keys...

You can use consecutive sus4 chords to create a build up of tension. I love how Luther Vandross opened his song Never Too Much, with a chromatic sequence of what sounds like 9sus4 chords. Another example...

And of course, you can resolve each (or some) of these sus4 chords to a major or minor chord, demonstrated by The Who in their classic Pinball Wizard (starts at 0:17). Listen to the descending sus4 - maj movements.

In major keys, the sus2 chord works nicely as a tonic chord. For example...

For a deeper, more "mysterious" tonic sound, try a 7sus2. Very nice when picked and drawn out. If you know your scales/modes, a 7sus2 would relate naturally to Mixolydian.

The sus2 chord also sounds very natural in the IV position. The table below will show you the relationship between the IV and tonic chord in several keys. maj7sus2 also sounds great in this position because in major keys the IV is naturally a maj7 chord.


7sus2 in the V position

When we add the minor 7th to sus2 chords, it destabilises them and creates tension. This means 7sus2's work effectively in the V position. You should know from the sus4 table earlier what these positions will be for a given key, so there's a little test for you!

Here's a little known use of 7sus2 chords, known as a "backdoor VII" in major keys or just the "subtonic" in minor keys. All we do is take the tonic chord of the key and move the root down one whole step for the bVII position. It's on this position we play a 7sus2 chord. A deep and soulful sound. Some examples...

Just like with sus4's resolving to major or minor chords on the same root, we can resolve sus2's in the same way...

Finally, be aware that you can move between sus4, sus2 and a major/minor chord all on the same root. Best when picking the chord as opposed to strumming.

Listen to how Radiohead's guitarist moves from Asus4, through Am, to Asus2 in the opening sequence of Street Spirit

I'm sure there are many more examples I could give you, but it's been a long lesson so I'll leave it there! Bookmark or print this page so you can refer back to it when needed. I hope you've not only discovered some new sounds for your songs, but next time you hear that suspended sound, you'll recognise it by ear without the aid of a tab or songsheet.