Certain guitar parts and playing situations are better suited to simpler chord structures. They're great for a number of purposes...

Whatever their purpose, in this lesson we'll explore some minimalist chord shapes known as closed position chords.

Not only do these shapes allow for more economical chord playing, they also have their own unique sound - a "skinnier" sound than the typical four/five and six string shapes. It'll show you how even the simplest chords can still sound colourful.

Sometimes referred to as closed position harmony. So-called because all the tones that make up the chord voicing exist within just one octave, meaning the harmony occupies an especially narrow or "close" range.

For example, take the major triad, which can be represented using the interval structure 1 3 5 (root, major 3rd, 5th).

If we play the chord from low to high, in that strict 1 3 5 sequence, here's one shape we'd get on the fretboard (the small red square marks the root octave)...

As you can see, the structure of the chord exists within its narrowest intervallic range, within a single octave, hence close or closed harmony.

Compare this to the following shape, which is again a major triad voicing...

In that example, the 3rd is voiced above the root octave, giving us the interval structure of 1 5 1 3. Therefore, as the voicing extends outside of the range of a single octave, it wouldn't be considered a closed voicing.

Aside from the theory, there is a difference in sound, created by the different sequencing and spread of chord tones, that makes closed voicings preferable in certain playing situations. So let's get to know them!

Below we break down the closed triad shapes on four root strings - 6th, 5th, 4th and 3rd. By viewing each triad type with the tabs below, we can learn a lot about chord interval structure and exactly what changes to create the different qualities.

Remember, these shapes are movable and can be positioned on any root fret, just like barre chords and other movable shapes... 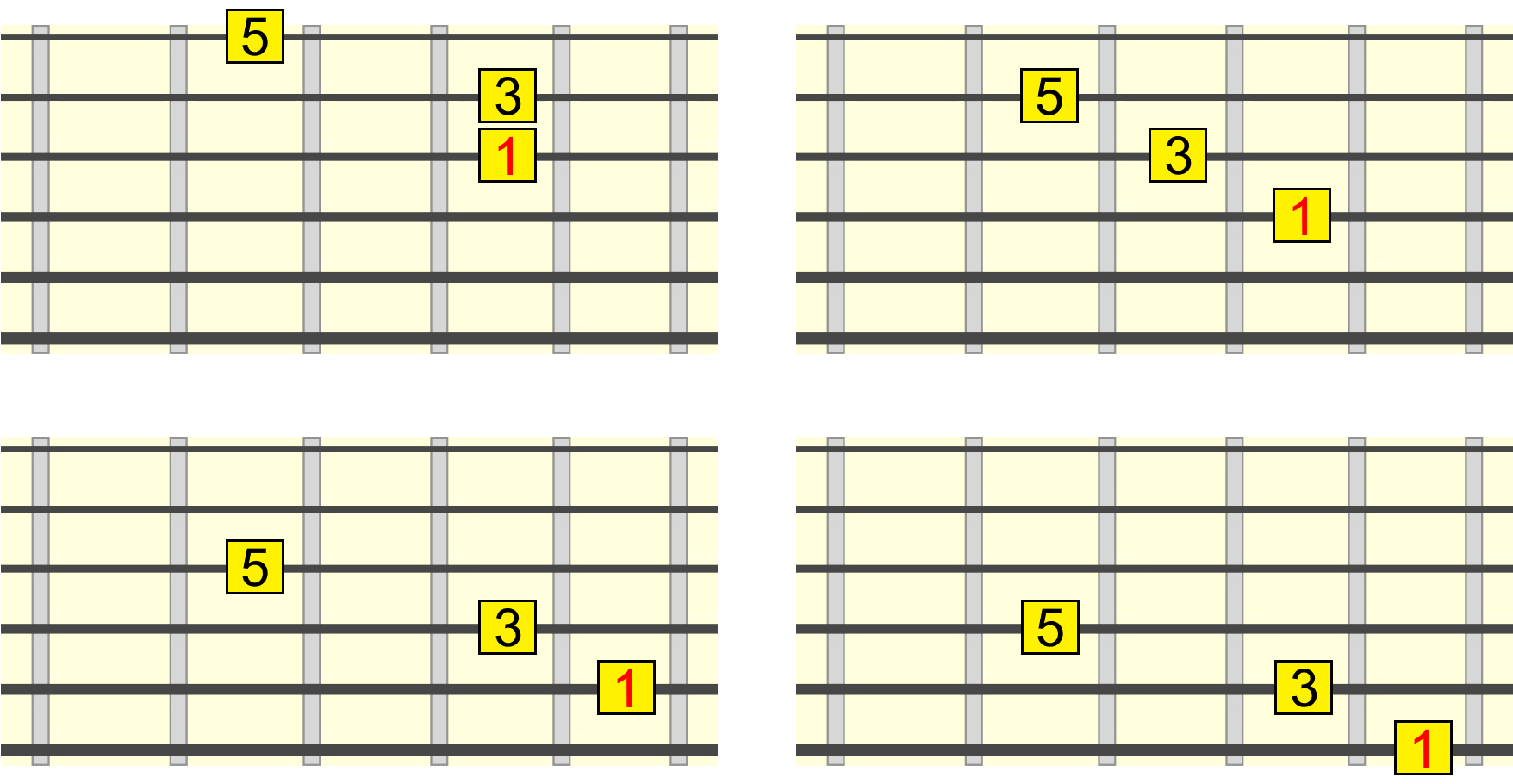 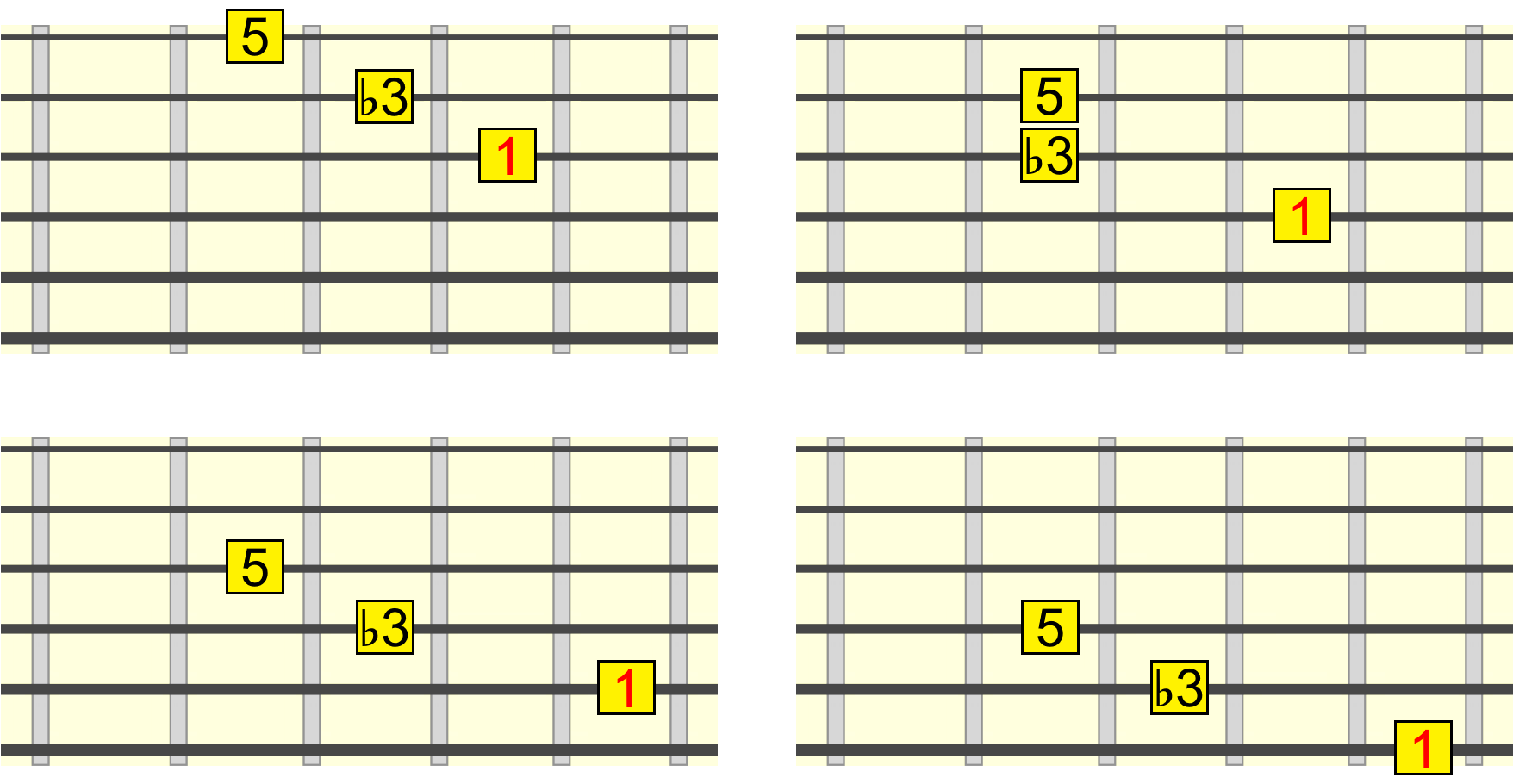 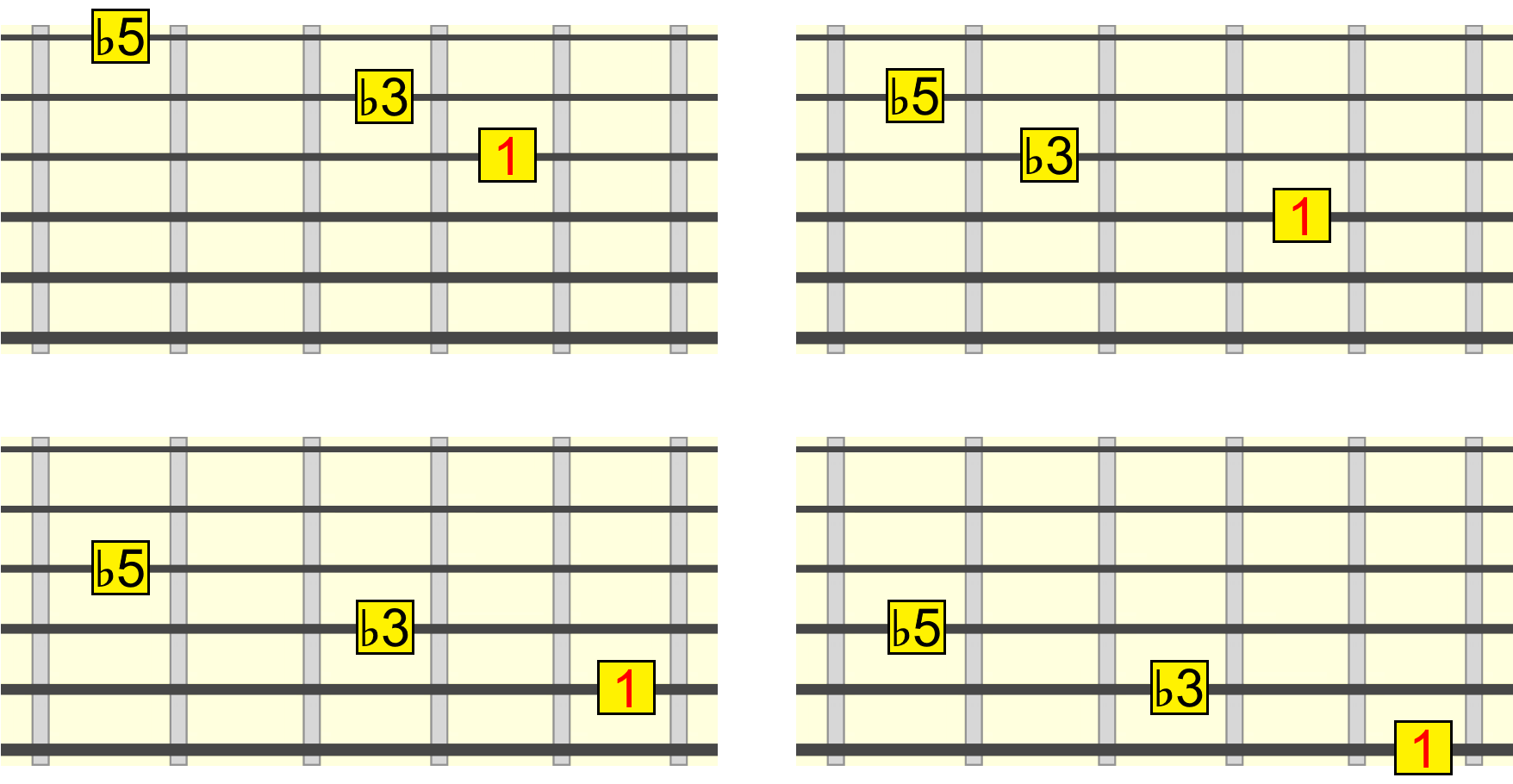 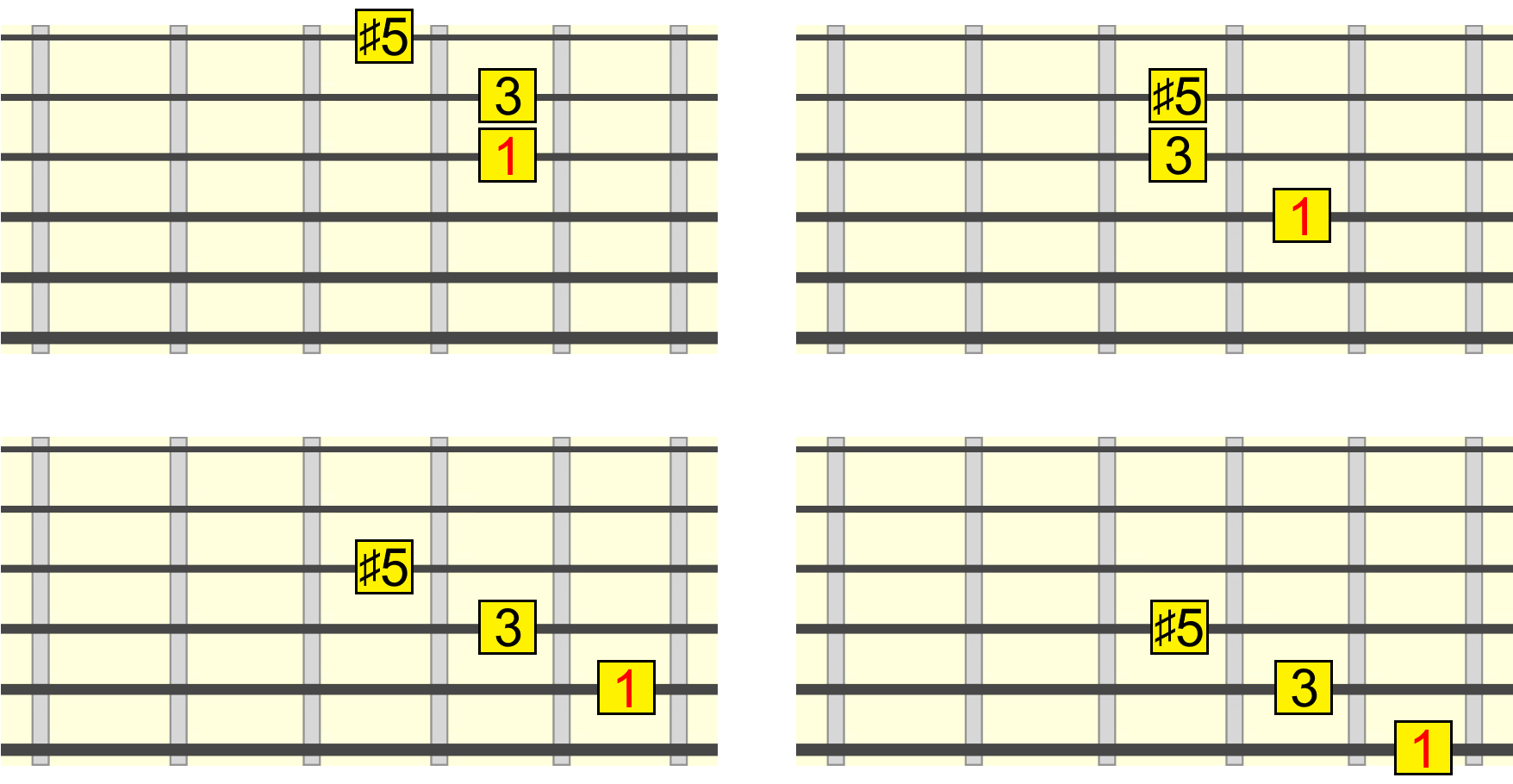 For closed shapes, most guitarists stop at triads. But we can apply the same "single octave" concept to other chord qualities. 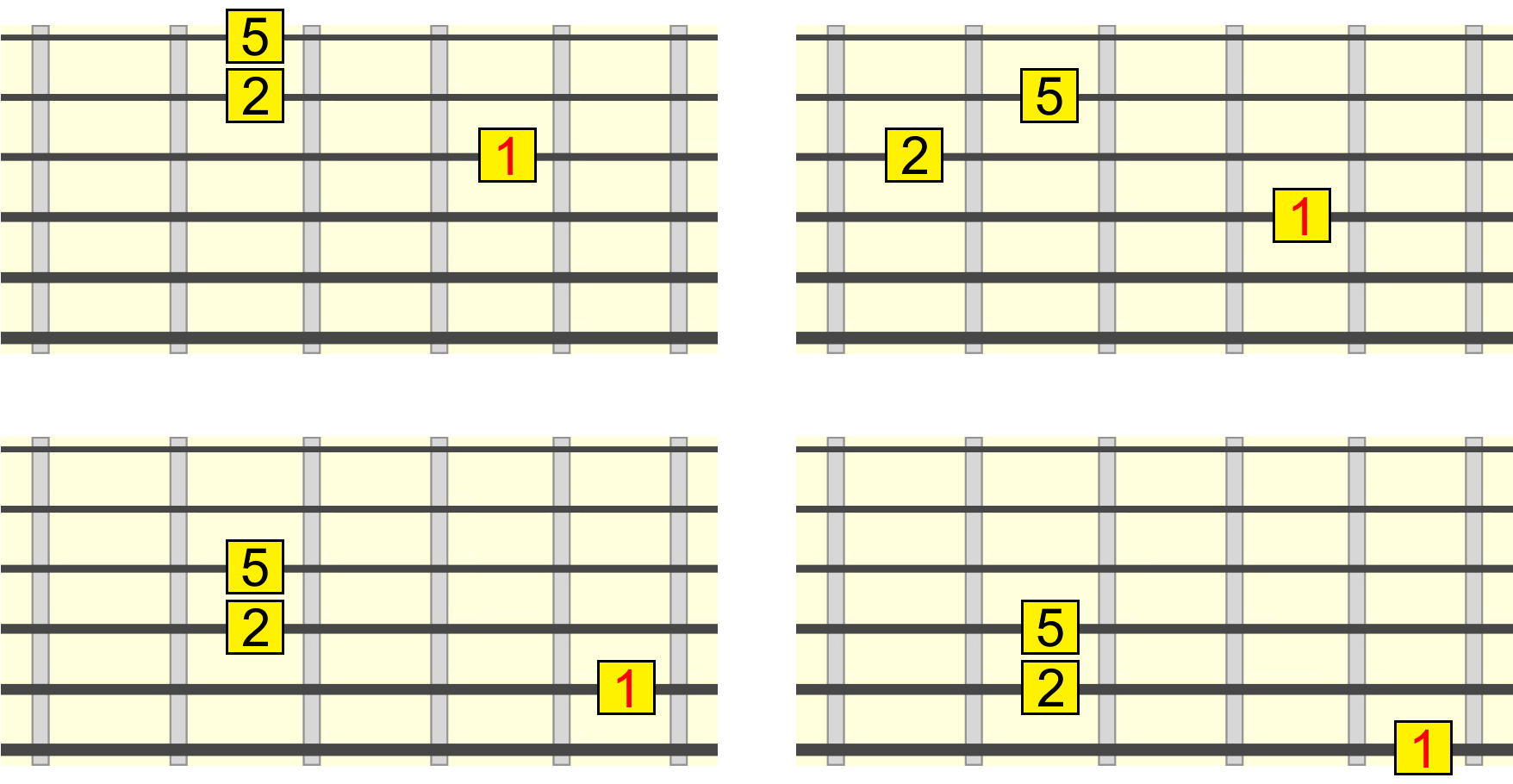 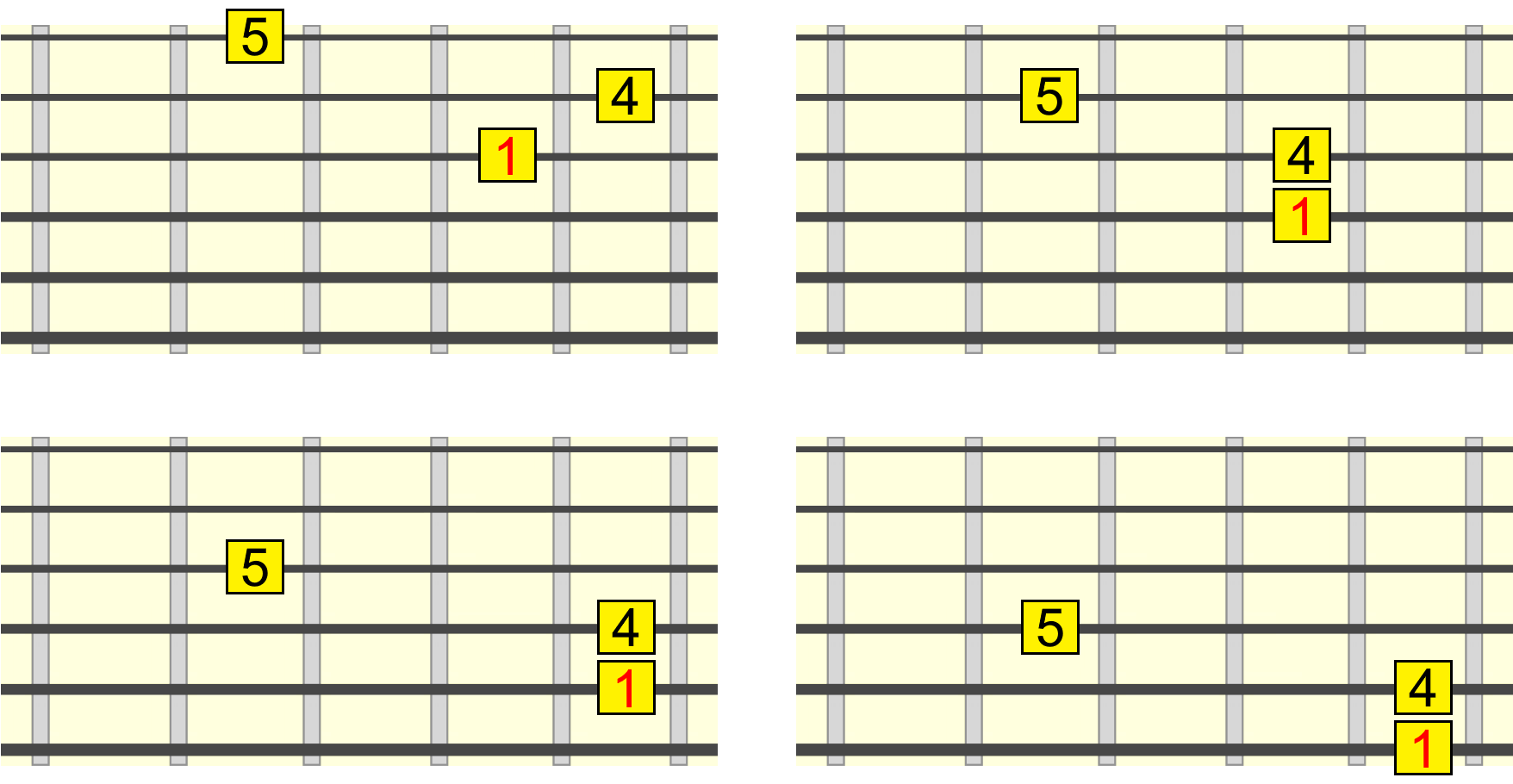 We can also involve the 7th (either major or minor 7th) within the closed, single octave range.

As we'll still be using just three strings/tones, we can omit the 5th on the top string of the shape in order to accommodate the 7th. This kind of 5th-less chord, that involves the root, 3rd and 7th, is known in jazz as a shell chord - an important foundation for harmonic accompaniment.

We'll look more broadly at shell chords in another part. But the general concept is that we're only using the most important tones (3 and 7) that define the quality of the seventh chord. Above the root... 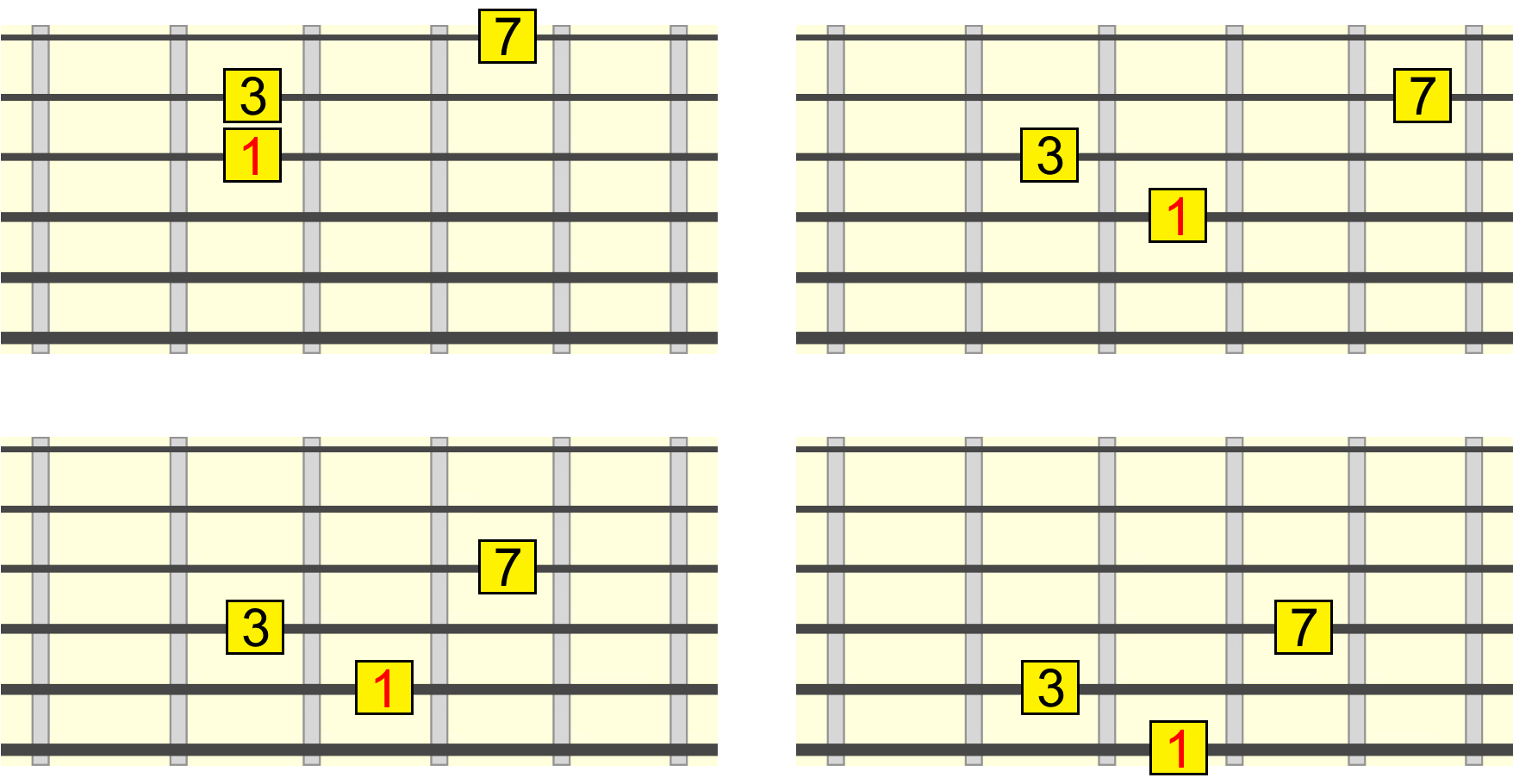 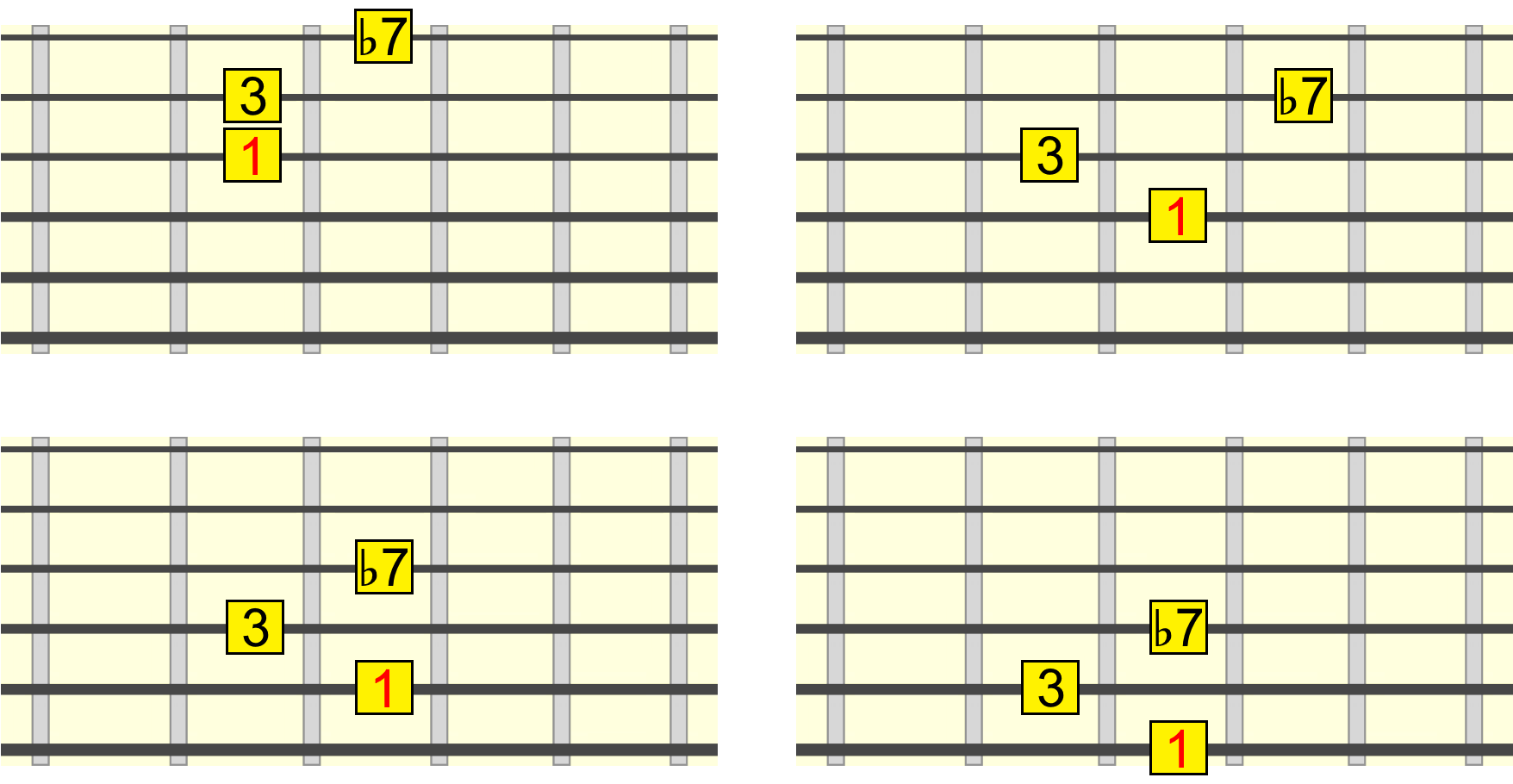 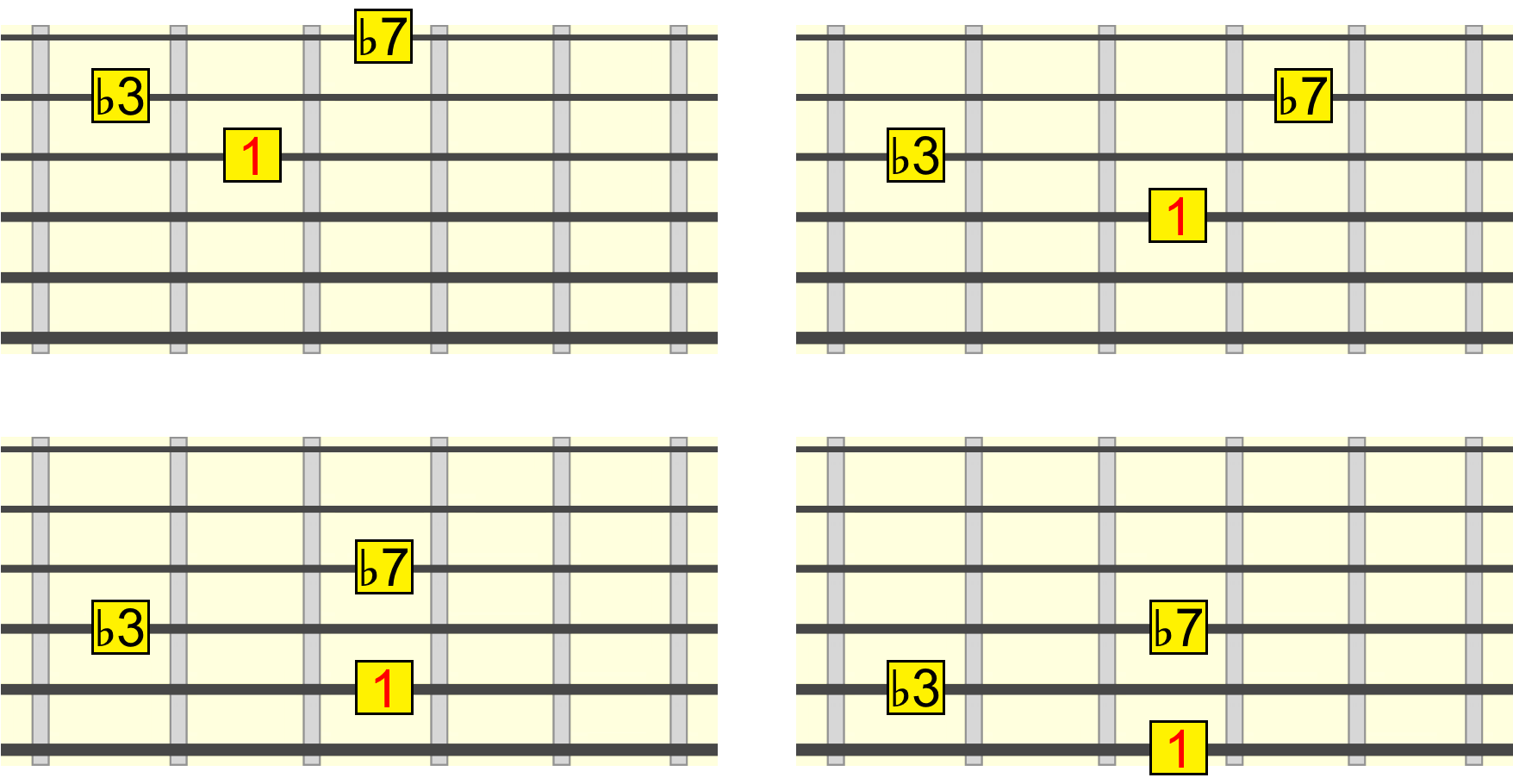 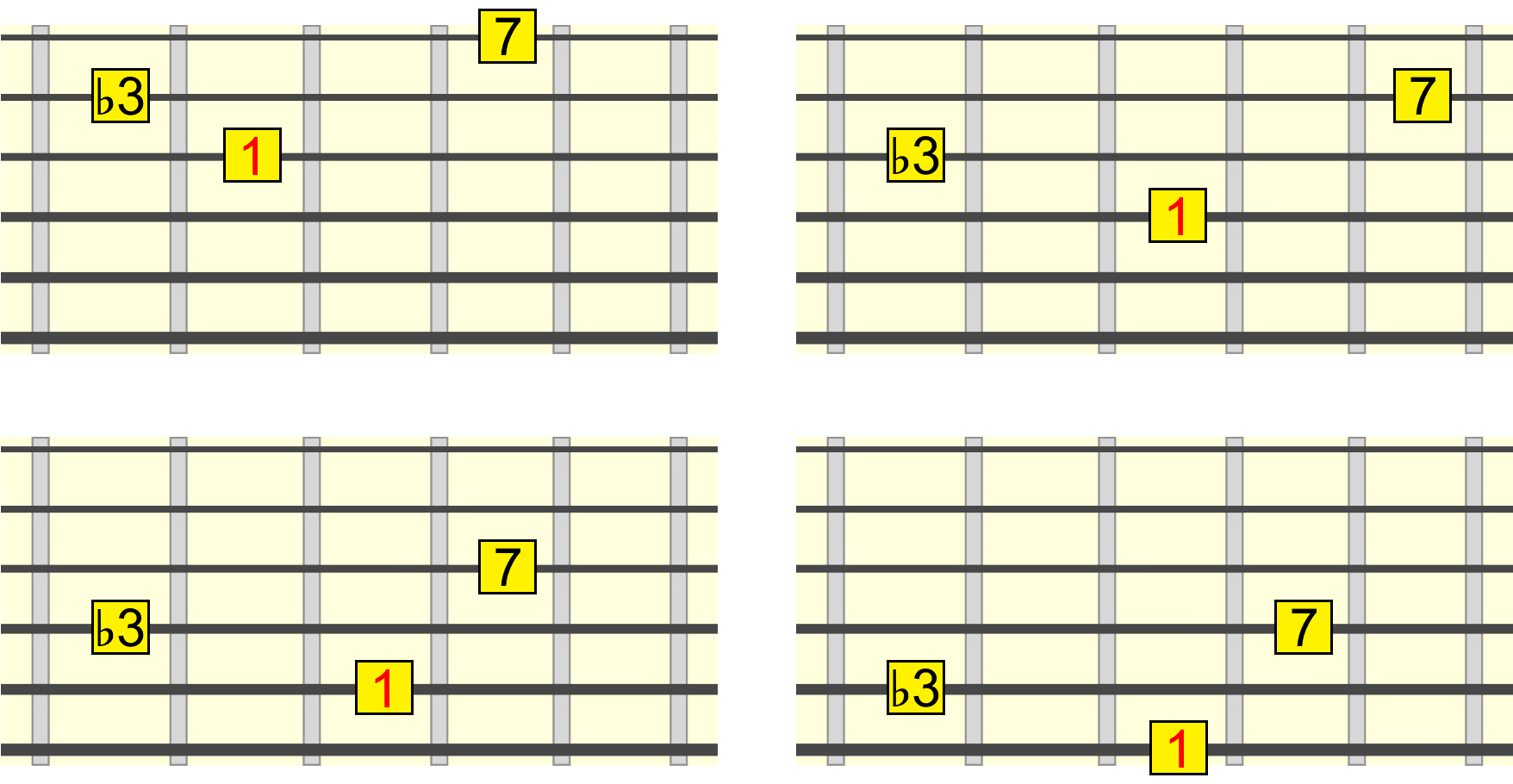 Similar to the seventh "shell" concept, by moving that top string (which would otherwise be voicing the chord's 5th) to different frets, we can add new colours to the major or minor dyad (root - 3rd) beneath it. Some examples... 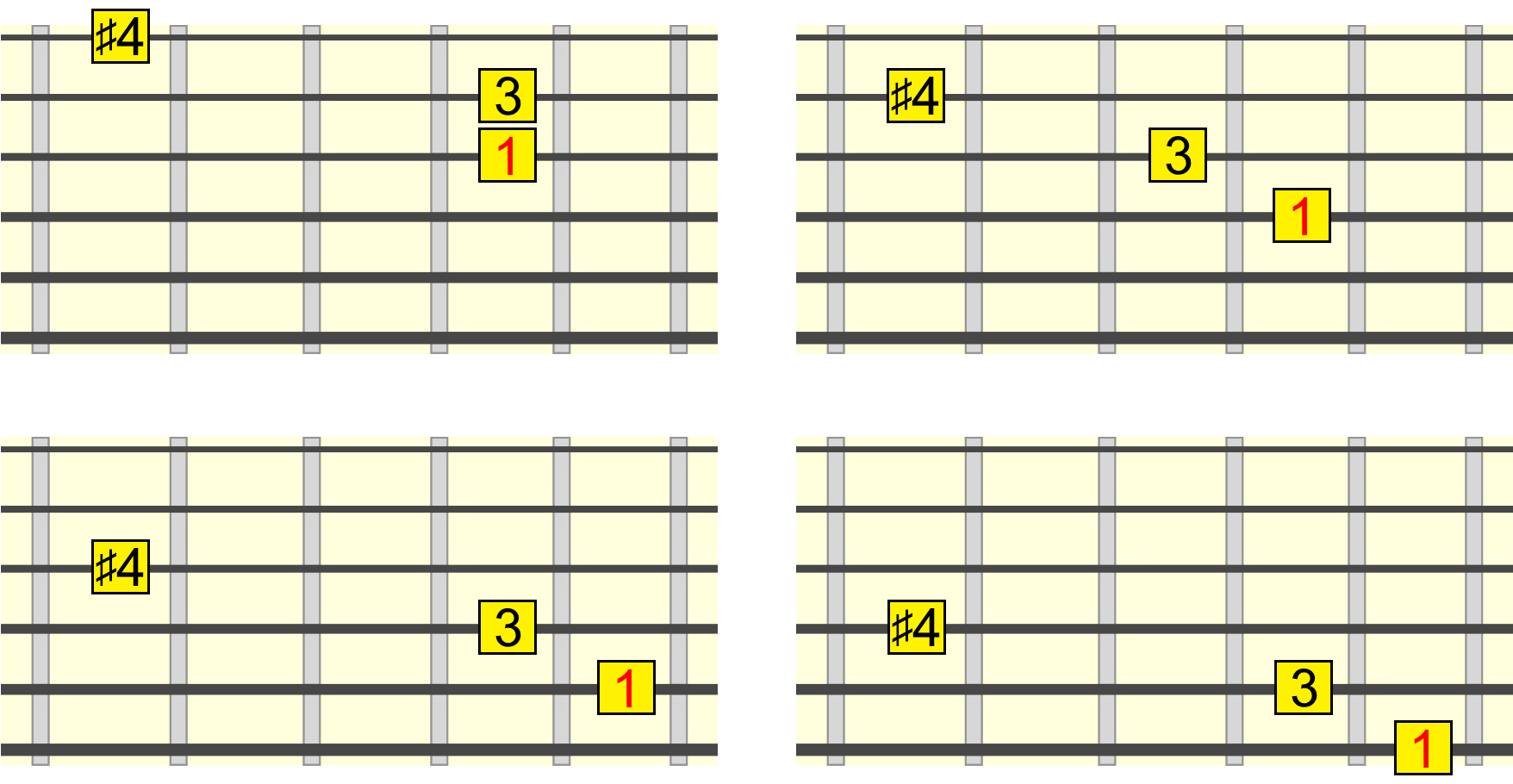 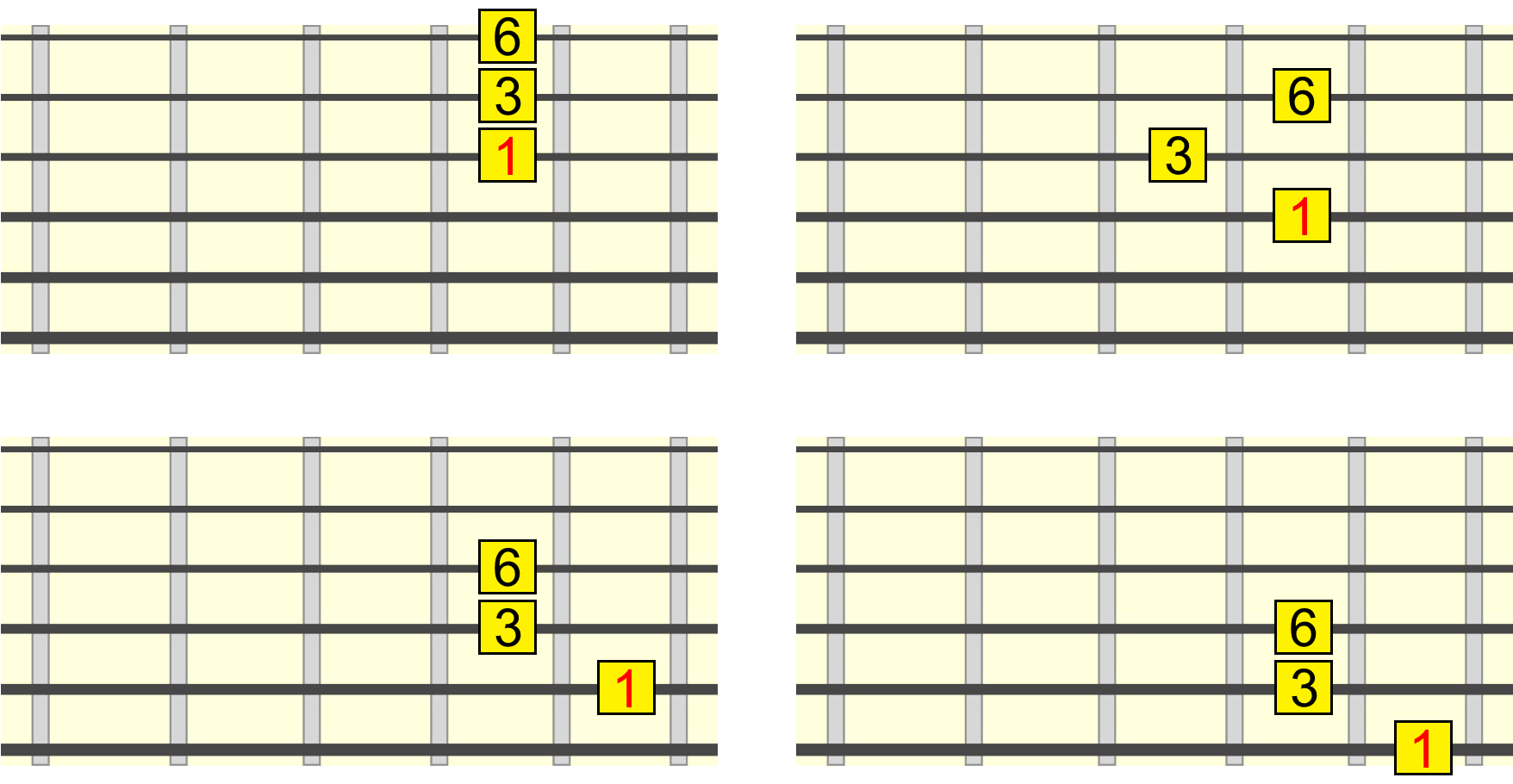 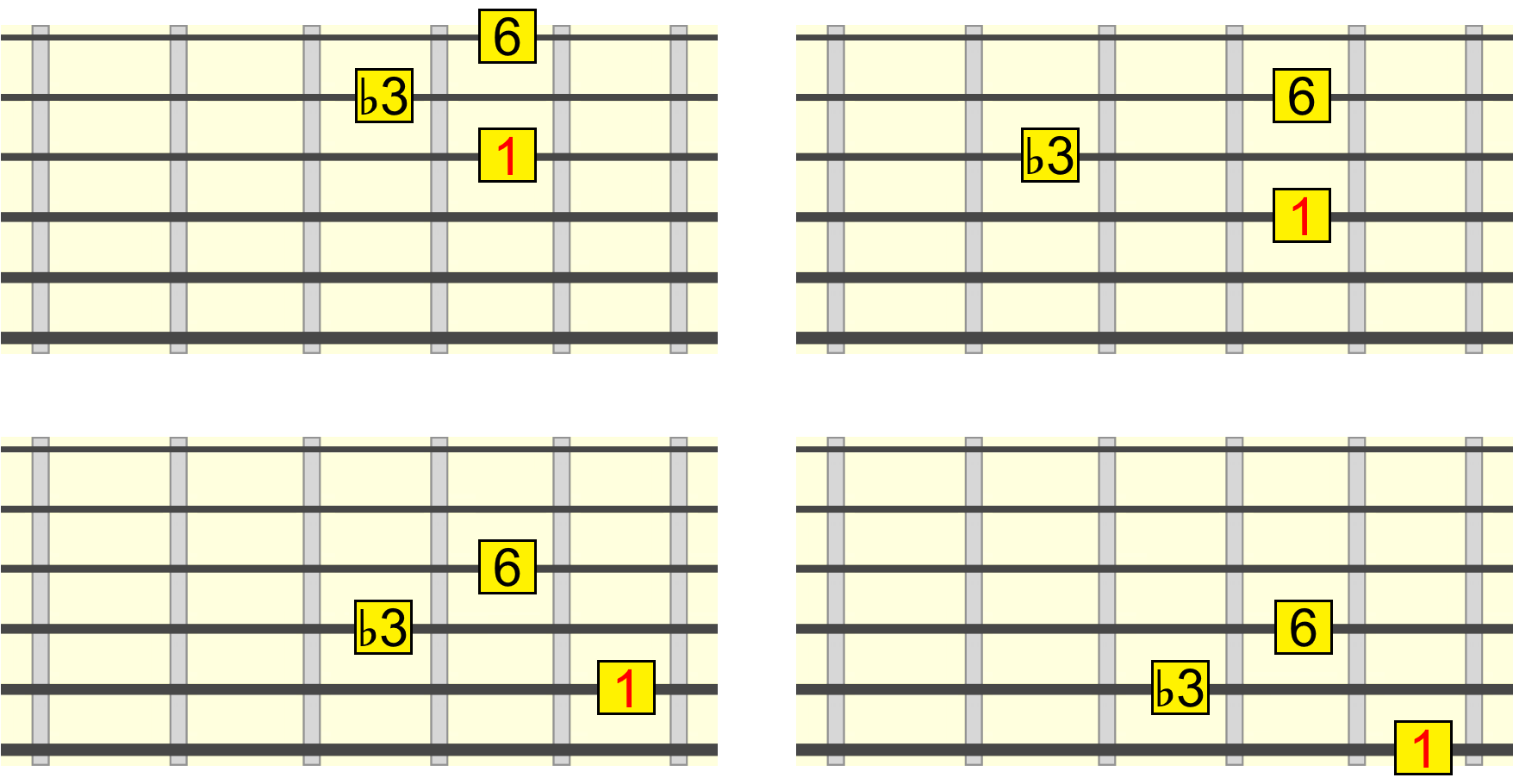 While all these closed shapes offer us minimalist yet colourful voicing options for chord accompaniment, we can also use this concept to become more aware of how intervals relate to one another on the neck (and by ear).

For example, once we've positioned the root on one of the four strings, we can identify a string of possible intervals above it - 2nd, minor 3rd, major 3rd and 4th - determining whether our chord will be major (3), minor (♭3) or suspended (2 or 4)...

Then we have the top tone layer - another string of possible intervals that will add either the standard triad 5th, or a different colour and chord quality. For example, with a major (1 - 3) base...

All the closed position voicings in this lesson can be seen as derived from this rudimentary layering of intervals, all within the range of one octave (the root octave would be one semitone up from the 7).

We can even use this interval block building exercise to create simple melodic phrases above the major, minor or suspended base.