Guitar barre chords are a type of movable chord form. These are chords you can position anywhere on the fretboard in their fixed formation (known as a "chord shape" or "chord form"). This allows you to use the same familiar fingerings at any fret. 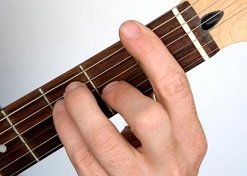 The barre (sometimes spelled bar) refers to positioning one of your fret hand fingers (most often your index finger) flat across more than one string. The barre becomes a kind of nut or capo, the base of the chord shape, allowing you to move it up the neck.

One huge benefit of learning barre chords is the freedom to play a chord in several places on the neck. You're no longer tied to one spot (e.g. as with open position chords), since there are several different shapes and positions you can use for a given chord. It also allows you to play chords inaccessible in open positions (F, C♯, A♭ etc.).

Ease into your first barre chord and enjoy the freedom and flexibility of being able to play chords anywhere on the neck...

Before we learn how to physically play barre chords, we ought to first understand how they're built so we can put them into the context of our own music. We can identify several barre chord shapes as follows...

Time and time again, I hear people refer to the E shape/form barre chord as the dreaded "F chord". It's seen as a key milestone after learning your first chords and will likely have a huge impact on your chord/rhythm playing.

So, what makes it the "E shape"? The sequence below starts off with the E major open position chord, with which I'm sure you're familiar. With it's related barre chord, this E major shape (the finger formation on the fretboard) simply gets moved up to the 1st fret (and beyond), meaning we have to barre our index finger to represent where the nut (or capo) would be in relation to the fretted strings.

So the barre covers the low E, B and high e strings, whereas the A, D and G strings represent that familiar open E major formation.

That shape can be positioned anywhere up the fretboard depending on the chord you want to play (1st fret = Fmaj, 2nd fret = F♯maj, 3rd fret = Gmaj etc.).

Now take a look at a similar diagram below... 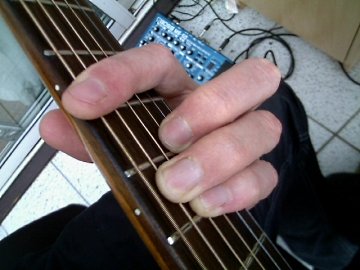 There are higher root notes in the shape, positioned on the 4th and 1st strings, but at this stage it's easiest to identify the root of barre chords by looking at their lowest root note (the bass note if you like), as the rest of the shape is built from that point.

There is also a minor E shape based on the open E minor shape we're already familiar with.  All we do is lift off our 2nd finger from the major shape to get a minor chord. 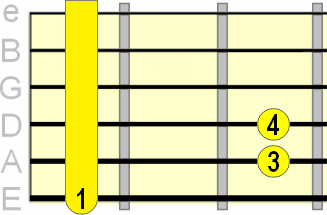 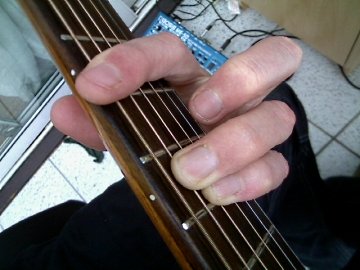 Exactly the same principle as above, but this time the barre chord is based on the open A major/minor shapes.

So this time, the bass root is on the A string. It's the A string root that determines the note we use in naming the chord.

Note: As shown in the photo below, for the major A shape, it's easiest to barre the 2nd, 3rd and 4th strings using your 3rd/ring finger and leave out the 1st string. 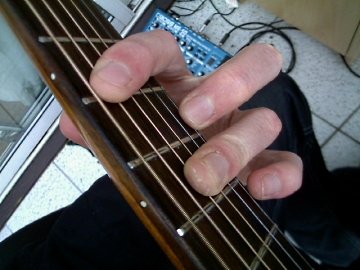 Again, we have a minor A shape based on open A minor. This time we use the index finger barre as usual... 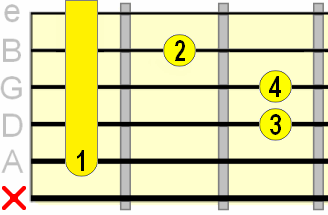 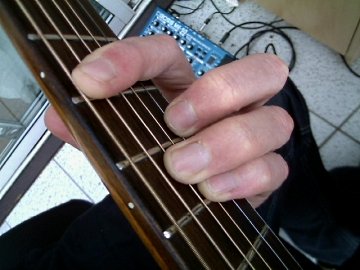 C Shape (not as important)

Not as commonly used, and more difficult to finger, but still good to know.

You can probably guess where C shape barre chords come from. That's right... the open C major chord we learn as beginners. 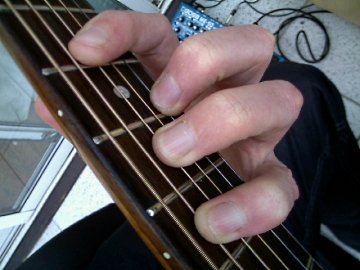 Because of the formation of our fingers in this shape, there is no convenient minor C shape to learn.

Some guitar teachers/players make reference to two further barre chord shapes - D and G. I personally wouldn't spend much time on these.

The full G shape is a mammoth chord to finger in a barre position (maybe even impossible for players with small hands), and most often ends up being cut down to the following variation of the A shape (notice the familiar in-line formation of the 2nd, 3rd and 4th strings). In this shape the root is positioned on the 3rd string. 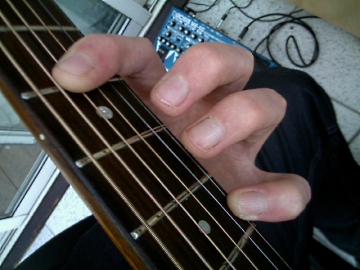 As for the D shape, it's not strictly a barre chord, since there are only four strings in the shape, and therefore one finger per string and no barre required. 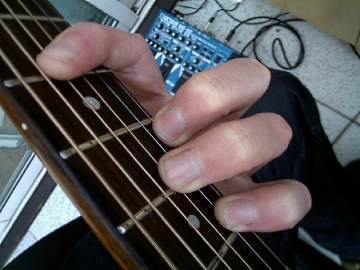 However, it might be useful to barre your index with the D shape (as shown in the diagram) if you want to use techniques such as hammer ons and pull offs in the chord shape and "catch" the string with your barre finger. More on that in another lesson!

And the minor shape... 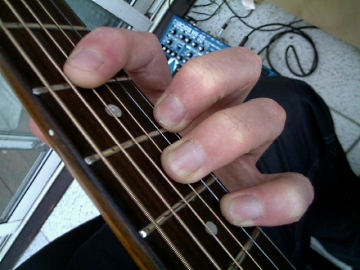 Bookmark and reference this page as you go through the next lesson on building finger strength with barre chords.