The major pentatonic scale is probably the most commonly used major key scale, not only in guitar solos, but also other instrumental and vocal melodies. It's also one of the simplest scales to play as there are only five tones to negotiate, making the patterns very easy to memorise. Plus, major pentatonic works over a number of different chord progressions.

Unfortunately, many guitar lessons out there only help you to memorise the patterns on the neck. They don't go into any real depth on how to apply the scale musically. So here I offer you a fresh approach, to learning major pentatonic in a more practical way, that will give you the grounding you need to develop your composition and improvisation skills.

Watch the presentation below for an intro and then scroll down for the supplemental content, including backing tracks and diagrams...

Let's first learn the building blocks of major pentatonic and where it comes from.

As the name denotes, major penta-tonic is a major scale with just five tones.

Like every scale, major pentatonic can be given a whole and half step interval formula that tells us the "distance" between each tone in the scale starting on a given root (1).

So whatever root note you start on, the scale sequence remains the same from that position: W W WH W WH

Why does the scale miss out a 4 and jump straight to 5? Because major pentatonic does not include a 4th interval, due to how it's formed. You'll understand this in greater detail in time.

This whole/half step can be visualised across a single string on the guitar. For example, the open G string would provide the root of G, and we'd continue the scale from there up to the 12th fret G octave...

Can you see where the 4 would have been if it was included? On one of those two frets between 3 and 5. But we don't use that tone in major pentatonic.

You can of course do this on any string and even start the sequence from a fretted note. Learning scales across single strings like this is a good way of developing your "horizontal" playing skills.

All scales have what is known as a "root chord" (or arpeggio, whichever way you look at it). This is the chord built on the root of the scale. With major pentatonic, and all major scales for that matter, it's the presence of a major 3rd (3) and perfect 5th (5) interval on top of the root that gives the scale its major flavour and name.

These three tones - 1 3 5 - make up a major triad. It's the skeleton around which the scale is built.

This also tells us it'll work predominantly over major chords and major key progressions. So if a song was in the key of A major, you could try A major pentatonic.

In the video, I highlighted three key tones within the pattern to memorise - the root, 3rd and 5th. Why? Because these three tones correspond to the major chord around which the scale is built. Therefore, learning these tone positions will give you safe targets and resting places to keep your scale movements connected to the backing chord.

Learn this one like the back of your hand first. Start by memorising the root positions (choose any starting root you want), followed by the 3rd and 5th. Note that I've added an optional lower sounding 6th on the low E string. 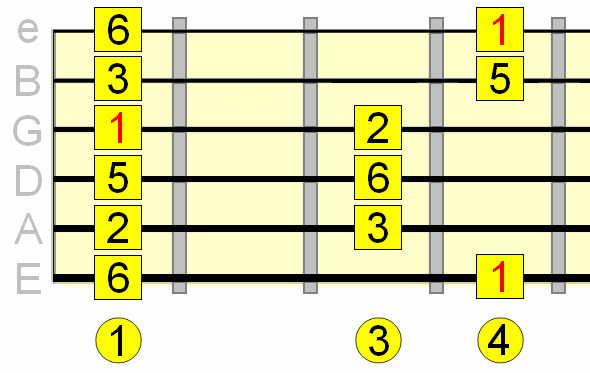 If you're playing in G major (at the 3rd fret), you'll have access to some open strings (tip: notice how the open Gmaj chord shape exists within this pattern - can you see it?). 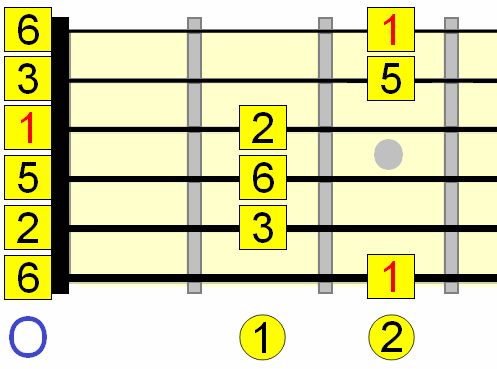 Tip: Try finding these patterns an octave up, beyond the 12th fret, so you can play the scale higher in pitch.

Notice how we can pick out familiar major chord shapes from within the patterns, namely the A and E form barre chords. A major chord consists of the 1 3 and 5 of the scale. Some players find it useful to first visualise a chord shape as a familiar "starting point" and then build the related pattern around it.

In the video I outlined a process for building simple but musical phrases, using our knowledge of the key target note positions. So we have the lead up sequence and the "landing" note connected to the chord we're playing over.

You can use the following chord tracks on three respective roots as accompaniment (there's no beat so you can play at your own speed)...

In the below examples, I'm using C major across the extended pattern, but see if you can apply this process to other roots.

Start with a two note lead up to one of your target positions. For example, here I'm targeting the root...

I'm targeting the 3rd this time...

Once you're confident with three note phrases, add in a 4th, 5th and more notes, gradually building up your targeting sequences.

By practicing in this way, you'll not only memorise the patterns, but you'll also develop your ability to improvise your way through the scale musically and intuitively. The target notes are your guide posts. Take your time.

Use a metronome to keep time and gradually build speed. Start as low as you feel comfortable (50 BPM is a good starting point) and increase by 10 BPM as you get more confident and can play without mistakes.

In the next part (coming soon!) we'll expand on what we've learned and introduce chord changes, which will be a lot easier now you know "the process"!

In the meantime, I hope you enjoyed the lesson and feel motivated to practice and jam this scale.