Why Trying to Play Guitar Fast is Pointless Without These Tips 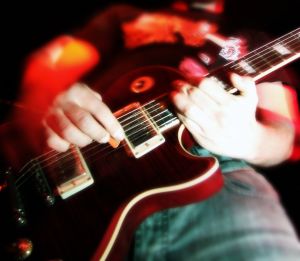 When we take our first steps as an infant, we may stumble trying to get to our destination. However, we soon learn that trying to run before we can properly walk results in a face full of carpet (and hopefully no worse than that).

We give up trying to run and focus on straightening out those shakey baby steps, one step at a time. And, in what seems like no time at all, we're running around like headless chickens, driving mum and dad mental.

You need to apply exactly the same mindset to playing guitar fast (bet you didn't see that coming... yeh right!). So first, we need to establish the golden rule:


Stop trying to make your fingers move faster than they can!

If you've been trying to play fast and getting frustrated, ask yourself this question: how well can I play this slow?

Many stumbling blocks in a guitarist's progress are caused by trying to jump ahead of their current ability, usually due to impatience. I know, it's tempting to take shortcuts - we all do it, and sometimes it's good to push yourself and test your limits.

But that's all it should be - a test. As soon as you realise you're only getting through the first four or five notes before making a mistake, it's time to wind back that metronome.

When you try to play fast, you're focusing on the speed rather than the application. Your fingers need to "memorise" every movement before they can get up to speed. That's called muscle memory, and it's easy to forget (huh-huh) just how crucial it is to speed and co-ordination.

Realise now that once you're able to play fast, there is no "try", just "do". It's the result of building up your speed gradually, knowing the lick/pattern intimately enough that your fingers have grown into it.

Speed then becomes just another form of expression you can use intuitively and in the moment, like a bend, hammer-on, slide or vibrato. And that's why some guitarists make it look so easy. But remember that, behind the scenes, they've been bleeding their fingers over this stuff (ok, not literally). They've built up speed and stamina so gradually, with near inhuman levels of patience, that they probably don't even think about how fast they can play anymore.

Now, from what I've said there, you're probably dreading a long road of chinese-water-torture-style metronome clicking and finger-aching drills ahead of you. Well, nobody said it would be easy, but there is some good news. There ARE practical ways to speed up... quicker. Here are 10 of the most important tips for playing guitar faster...

A lot of players tense up when they try to play fast, and this affects two things - the flexibility of their joints and their breathing. You need to be flexible in order to avoid unnecessary obstruction. Your muscles need oxygen, especially when under endurance. Playing guitar is more physically demanding than you probably realise, and not just on your fingers.

A lot of the time you won't even realise you're tensing up. Think about it every so often and check up on yourself.

Spend ten-or-so minutes stretching your fingers before you pick up the guitar. This will help with things like finger independence, blood flow (again, oxygen to the muscles!), and joint dexterity.

Many guitarists simply forget to stretch before they play and then wonder why their fingers feel more stubborn on certain days. Stretch those finger joints and you will find speed comes a lot easier (and less painfully).


3. Ten is the magic number

Always start what you want to learn slow, whether it's a lick, chord changes or scale pattern and speed up gradually. I recommend using increments of 10 BPM on the metronome, only notching it up when you can play at the current tempo without mistakes (so important!).

By only using small increments like this, your fingers don't feel so much of a jump in physical demand. 80 BPM doesn't sound that distinguishable from 70 to the human ear, and your fingers won't feel it to be either - but with increments of 10 you'll soon get to 100, then 140, 180.


4. Use legato to play faster

Sometimes you'll listen to someone playing a fast solo and think "how the hell did they pick that fast?", well you might want to take a closer listen, because in many cases they're not picking - they're using hammer-ons and pull-offs, also known as legato playing or "note slurring". Playing without picking.

Legato is one of the keys to unlocking speed on guitar, as often it's your pick hand what slows you down. Mastering legato techniques means you can let your fret hand fingers do their thing without having to co-ordinate a pick stroke with every note.

It might sound lazy, but legato is also favoured for the tone it produces. It has a smoother, rolling sound that is often preferable to the more percussive attack of a pick stroke.

Economy picking simply means, when you can, pick in the direction of travel from one string to the next. So if you end on a down stroke on the D string and want to move to the G string, you'd continue that downstroke in one smooth motion (known as a sweep pick) so it follows through to the G string.

This may help you play quicker because you're minimising the unnecessary movement of your pick, and therefore you can move more directly from one string to another.

Remember, though, there are some blazingly quick guitarists who exclusively use strict alternate picking (combined with legato). So economy picking is not a necessary skill for speed playing, but it may help you get their quicker.

Aside from economy picking, just ensuring you only move your pick as much as you need to is a good general rule. Keep your pick strokes tight around the string.


6. Press the strings only as hard as you need to

Not many players think about this. How hard are you pressing the strings to get the note? To play fast, you need to be able to glide over the frets, touching the string against them just enough to get a clean, defined note. Any harder than that is unnecessary and may compromise your speed.

Your fingers will be required to make some awkward movements on guitar, which will slow you down at first. There are exercises you can do which have been referred to as "tongue twisters for your fingers" that will help with building both "linear" and "vertical" speed. Here are a few examples to get you started, but be inventive and come up with your own. Good luck!

They may not sound very musical, but they make great post-stretching warmups for 10-or-so minutes and will prepare you for similar movements you'll encounter in licks. They'll also encourage you to explore the fretboard in more unpredictable ways.


8. Lower the action on your guitar

Set up your guitar (either DIY or by hiring the services of a local tech) so that the action is as low as possible without causing fret buzz.

This is more of a challenge for cheaper guitars, but it makes sense to get it as low as possible so that you don't have to physically press the strings down as far, which will help speed things up. 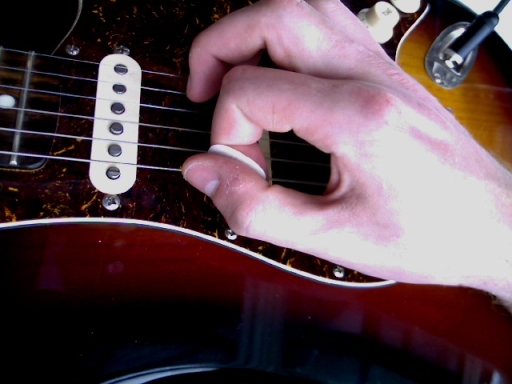 Some players find that, by adjusting how they hold the pick so it's at a 45 degree angle, they feel less obstruction against the strings.

So you're cutting across the string more with the edge of the pick rather than picking flat against it - less surface area to obstruct your pick movement.

You may also find using a thinner pick will help to play faster (it did for me).

Also in the picture above, my hand is rested on the bridge of the guitar. I found this helps to stabilise my hand and create a more fixed pivot point, which translates to more co-ordination with the strings and therefore potentially faster playing.

However, this is more of an experiment than a "must do". There are drawbacks to this as far as getting the tone you want - with your pick hand fixed on the bridge, you're confined to the middle pick position. If you want that fat, warm neck position tone, you'll have to either find an alternative way to stabilise your hand (e.g. rest your pinky finger on the pick guard) or learn to play without that stabiliser.

So, you're now in the right mindset and have the steps you need to develop speed without frustration or hindrence.