Exploring The Dorian Mode on Guitar

Dorian is like any other scale - it has its own melodic flavour and can be played over chords and certain progressions.

This lesson will not only show you the essential patterns and theory for playing Dorian, but you'll also learn, through the aid of ear training audio and backing tracks, when it sounds good to use.

Before you start with the presentation below, make sure you have a basic knowledge of the major scale (as Dorian is one of its modes).

So this is not for beginners, but I've tried to break it down as simplistically as possible. A lot of this is about ear training, so you rely less on charts to tell you what to play...

First, get to know the intervals of Dorian. These are the building blocks that give Dorian its unique sound.

As a minor scale (1 ♭3 5), it's the major 6th (6) interval that gives it its special quality. So when you correspond the root (1) of the scale with the minor chord you're playing over (e.g. D Dorian over Dm) and emphasise that major 6th, you'll instantly hear Dorian's colour...

Hear the 6th being held over a minor chord

Next, the roadmap. This shows us how the intervals of Dorian appear on the guitar fretboard. Let's start with two main patterns - one built around an E string root, the other around an A string root.

By using these E and A string reference points, you'll be able to locate them based around familiar chord shapes in the same position, such as the E and A form barre chords. 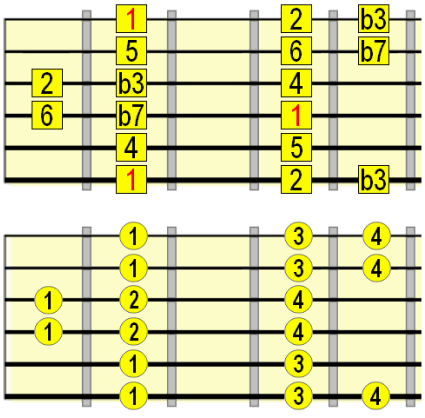 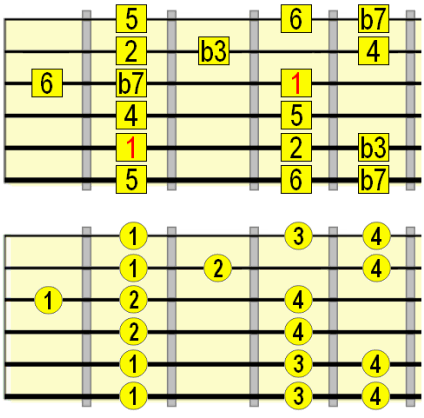 For those who can stretch a bit more, also try these three-notes-per-string patterns. Notice how we simply extend the above patterns to cover more frets... 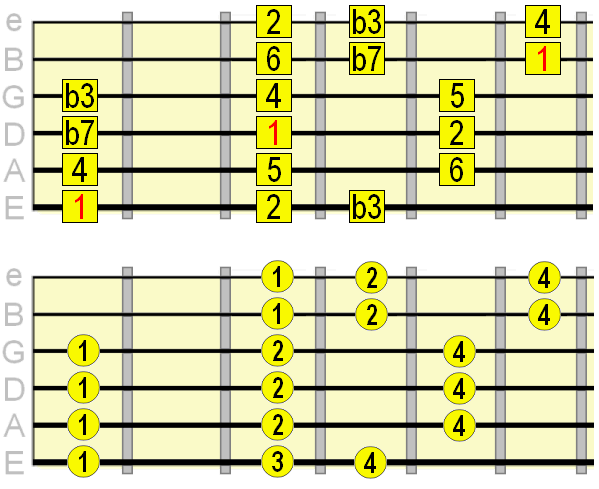 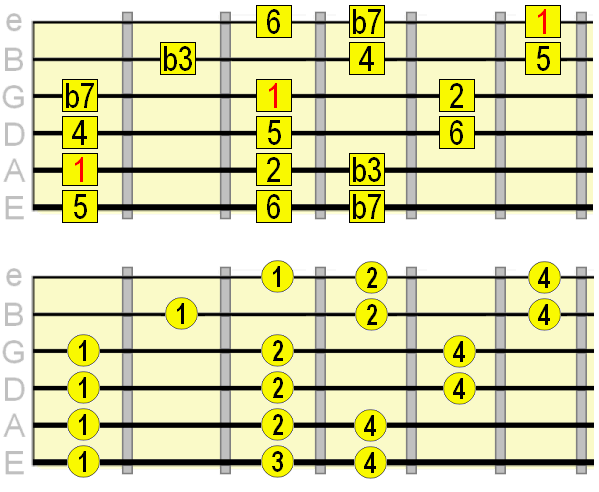 This way, you only have to spend time learning one scale (the major scale) across the entire fretboard and you'll automatically know its seven modes starting from their related major scale degrees (e.g. 2nd mode Dorian starts from the major scale's 2nd note).

To begin with, have a play around with the scale over the D minor chord track below. Try targeting (lead up to, emphasise) different notes in the scale, such as the minor 3rd (♭3), major 2nd (2) and major 6th (6). These are the "colour tones" of the scale.

Just roam the scale freely and intuitively, listen closely and get an ear for its sound...

❱ Download the Dm Chord Track (or stream below)

Next, try moving root positions. Dorian works over pretty much any occurrence of a minor chord. So let's say we had two minor chords played in succession. You could play Dorian over the first chord and then move your Dorian pattern to the root of the second minor chord. Example...

So here we'd position the first Dorian pattern on A♭. When the chord changes to Bm, we simply move the pattern up three frets so our root is on B...

As mentioned in the video, another example of using Dorian is over a minor iv chord.

Side note:  You can also see this change of scale over the minor iv (e.g. Fm in the key of C major) as a parallel change from the major scale to natural minor (e.g. C major to C natural minor). This is a type of borrowed chord from the parallel minor key.

So, in short, Dorian will work over pretty much any instance of a minor chord. Remember that!

Dorian also has a modal function, which basically means we can use one Dorian root pattern over a sequence of related chords. We might call these Dorian chord progressions.

Although in most cases composers typically do not set out to write modal music, modal sequences often naturally occur in music simply because they sound good and meaningful melody/harmony can be easily extracted from them. Dorian has a unique quality based on its melodic and harmonic characteristics, giving it a unique attraction to musicians.

The "center" of any Dorian based progression can be identified as the ii chord in major scale harmony (hence, 2nd mode). This is because if we build a chord on the major scale's 2nd degree, we get a minor triad with a major 6th.

Therefore, I find it easiest to label the "Dorian chord" as the ii chord. In C major, that would be Dm. In F major, Gm. In A major, Bm. So the ii chord always exists one whole step from the I of its parent major scale (1 w 2).

Confused? The best way to understand is to hear it! Here are some common Dorian progressions with backing tracks for you to practice with.

A movement relative to the ii and V of the major scale. Example: Pink Floyd - Great Gig in the Sky (starting from 1:06)

See the table below for this movement in two different keys...

A common extension of the ii - V movement. Example: Mansun - She Makes My Nose Bleed.

Another variation on ii - V. Example: Alice in Chains - Down in a Hole.

Tip: be careful over that iii chord. Try to avoid, or at least don't hang around on Dorian's ♭3 over this chord. You'll hear why if you try it. There's a reason for this which I won't bore you with right now!

Similar to the previous movement, but this time the V chord is typically extended to an 11th chord. Has a kind of jazzy/soulful feel to it. Example: Doves - Black and White Town.

Example: the intro to Al Green's Let's Stay Together.

Hopefully, by spending time practicing over these progressions, you'll develop an ear for that "Dorian sound". You'll be ready for it!

Remember also that sometimes you'll hear these movements being used over a fixed root/bass. For example, here's how that last D Dorian progression would sound with a fixed D bass...

You can learn more about exploring modes using this "fixed bass" technique in my modes ear training lesson. It's a great way to train your ear to the distinction between Dorian and other modes.

Also, you can find more Dorian based backing tracks here (along with guide patterns) to help you further train your ears to its harmonic characteristics and accompany it with meaningful melodic phrases.

Thanks for sticking this through to the end. I hope you enjoy exploring this beautiful scale and applying it to your own music!