Borrowed Chords - How To Spot & Play Over Them

Borrowed chords are just one way of interpreting chord changes outside of a piece of music's natural key. But they can also give us fresh ideas for songwriting.

In this lesson we'll learn what borrowed chords are (borrowed from where?!) and how to spot them for accompaniment.

Start by watching the video below and then scroll down to go at your own pace...

What Are Borrowed Chords?

In short, the word "borrowed" refers to changing to a chord that, instead of being in the natural key we started in (e.g. C major), can be seen as a part of a parallel key (e.g. C minor).

Even though the natural key of C minor contains different chords to C major, its chords can be "borrowed" to be included as part of a C major key progression.

Such changes occur a lot in popular (and less popular!) music. So learning about them is useful for knowing when to change the notes in your solo or harmony part to complement the change.

But, as a songwriter, it's also a good way of making your chord progressions a little less predictable, yet still pleasing to the ear and natural sounding. More creative options, basically!

Let's go through some practical examples of borrowed chords...

Here we have the natural chords in the key of C major, numbered 1 to 7 (often represented using Roman numerals - I to vii)...

All these chords contain notes from the C major scale and therefore any combination of them used in a progression would be compatible with that scale.

In other words, C major is the "parent scale" of any chord progression that uses any of these seven chords.

In the key of C major that would be Cmaj / Gmaj / Fmaj.

But often the 4 chord will be minor. Therefore in in the key of C major, F minor might replace the F major 4 chord...


Or we might go to F major as usual but then change to F minor...


This means that while the 1, major 4 and 5 can be connected to the C major scale, the minor 4 chord temporarily takes the sequence outside that scale.

One simple way of interpreting this change is to see the minor 4 chord as borrowed from the parallel C minor key... 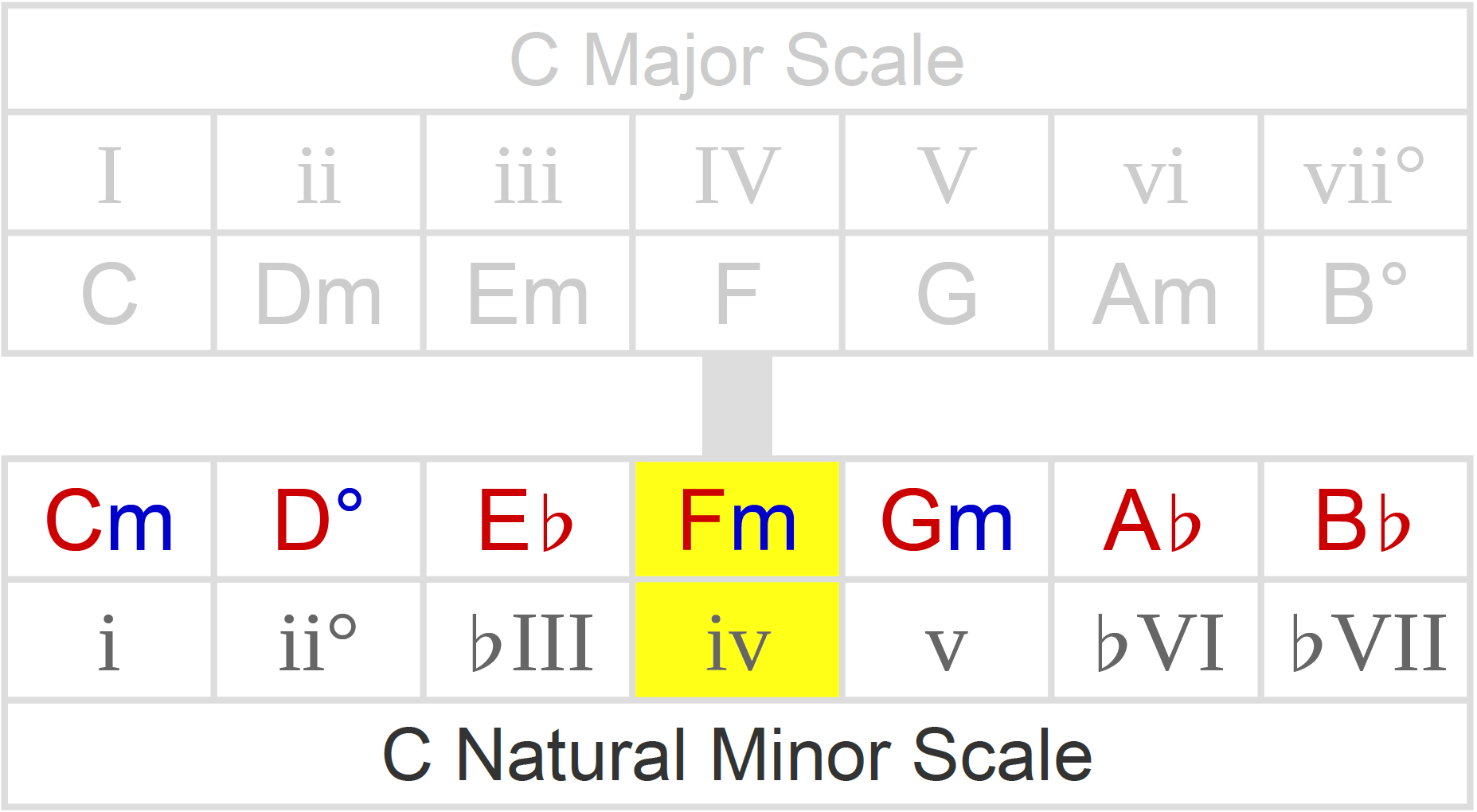 The word "parallel" refers to the tonic (or 1) chord being on the same root for both major and minor keys. C in this case.

As we can see, the 4 chord in the minor key is naturally a minor chord.

Therefore, if we wanted to accompany these 1 5 4 changes, all we'd need to do is change from the C major scale to C natural minor over that minor 4 chord...

If you prefer you could also see this as a change to the relative E♭ (E flat) major scale, instead of C natural minor.

Either way, it's all the same notes and pattern. How you visualise it depends on how your brain processes this change.

The borrowed chord concept is a good place to start with practicing scale changes, because many major key chord changes you'll hear, that move outside of the parent scale of the key, can be covered by the minor scale on the same root, or its relative major scale.

Try it yourself! Use the Cmaj / Fm backing track below (courtesy of Chusss Music) to explore the change between the C major and C natural minor scales...

Second only to the minor 4 chord, a common example of a borrowed minor key chord is the major chord built on the 6th degree, or A♭ major in this key... 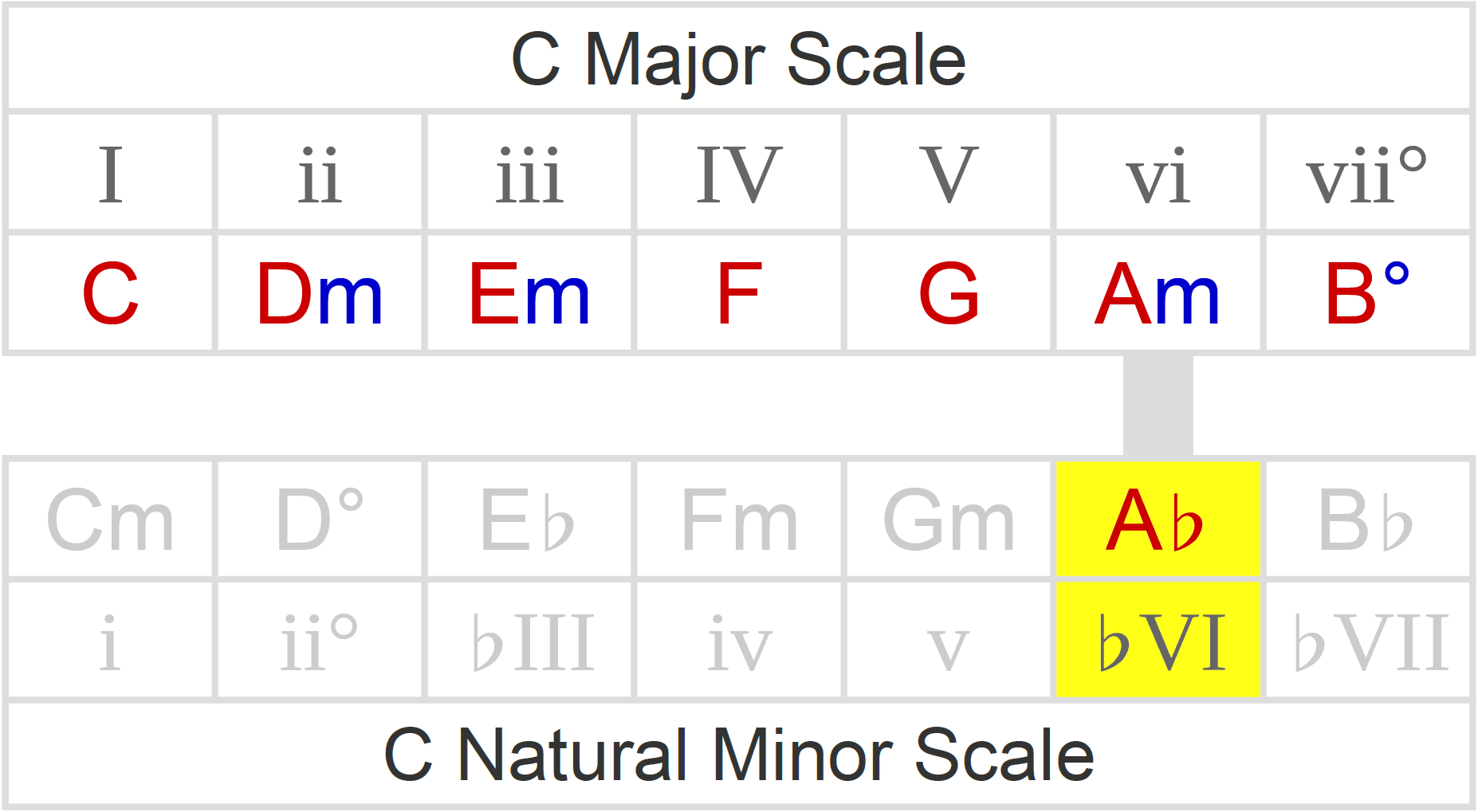 In the C major key, this chord becomes a flat 6th degree (♭VI), because the natural 6 (vi) would be on A.

As we're essentially borrowing this chord from the parallel minor key, we can change from the C major scale to C minor over that Ab major chord...


Of course there are many other combinations you can use, so have an experiment with placing the ♭VI in different places within a progression.

The more time you spend listening to and playing natural major key progressions, the more these borrowed or outside chords will start to stick out and you'll know when to change scale.

Try it yourself! Another great jam track from Chusss Music involving changes between Cmaj and A♭maj. See if you can time the scale change between C major and C natural minor with the chord changes...

Another example is to borrow the 3 chord from the parallel minor key, another major chord.

In C minor for example, the 3 chord would be E♭ major.

In a major key context, that borrowed 3 chord becomes a flat 3rd degree chord (♭III), one fret down from the natural 3, or a minor 3rd up from the tonic... 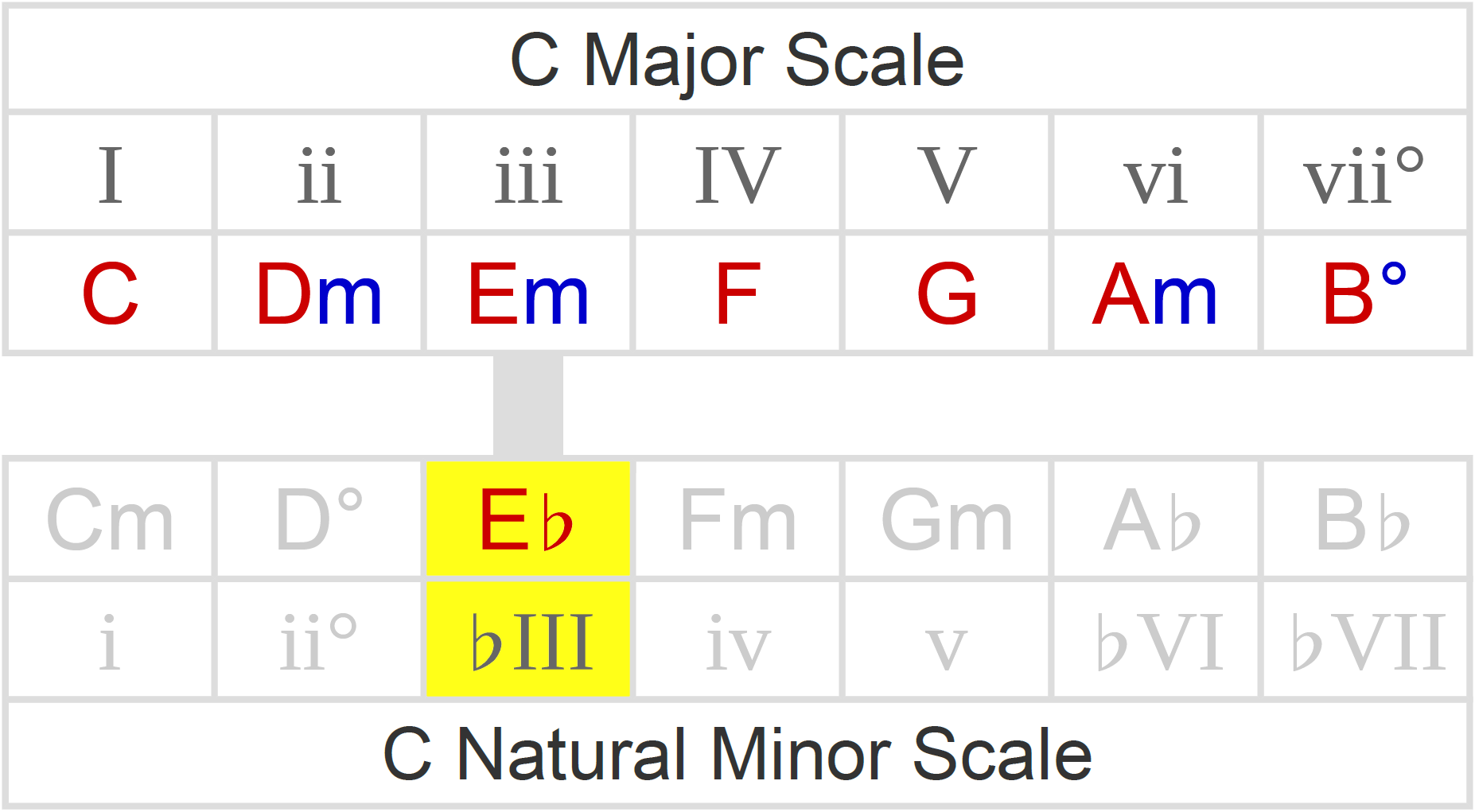 And again, because we've simply taken the 3 chord from the parallel minor key, all we need to do is change from the C major scale to C natural minor over that Ebmaj chord...

Again, it's worth noting that some musicians may prefer to visualise the major scale three frets up from the tonic to cover these borrowed chords. It's all the same notes. In all these examples, E♭ major is the same as C natural minor.

Like before, this borrowed ♭III chord could occur within larger major key movements. For example...

On to another example, borrowing the 2 chord of the parallel minor key.

In C minor, the 2 (ii°) chord would be D diminished, more commonly Dm7♭5, often called a half diminished seventh chord.

That small circle ° next to the ii tells us it's a diminished chord and therefore borrowed from the parallel minor key... 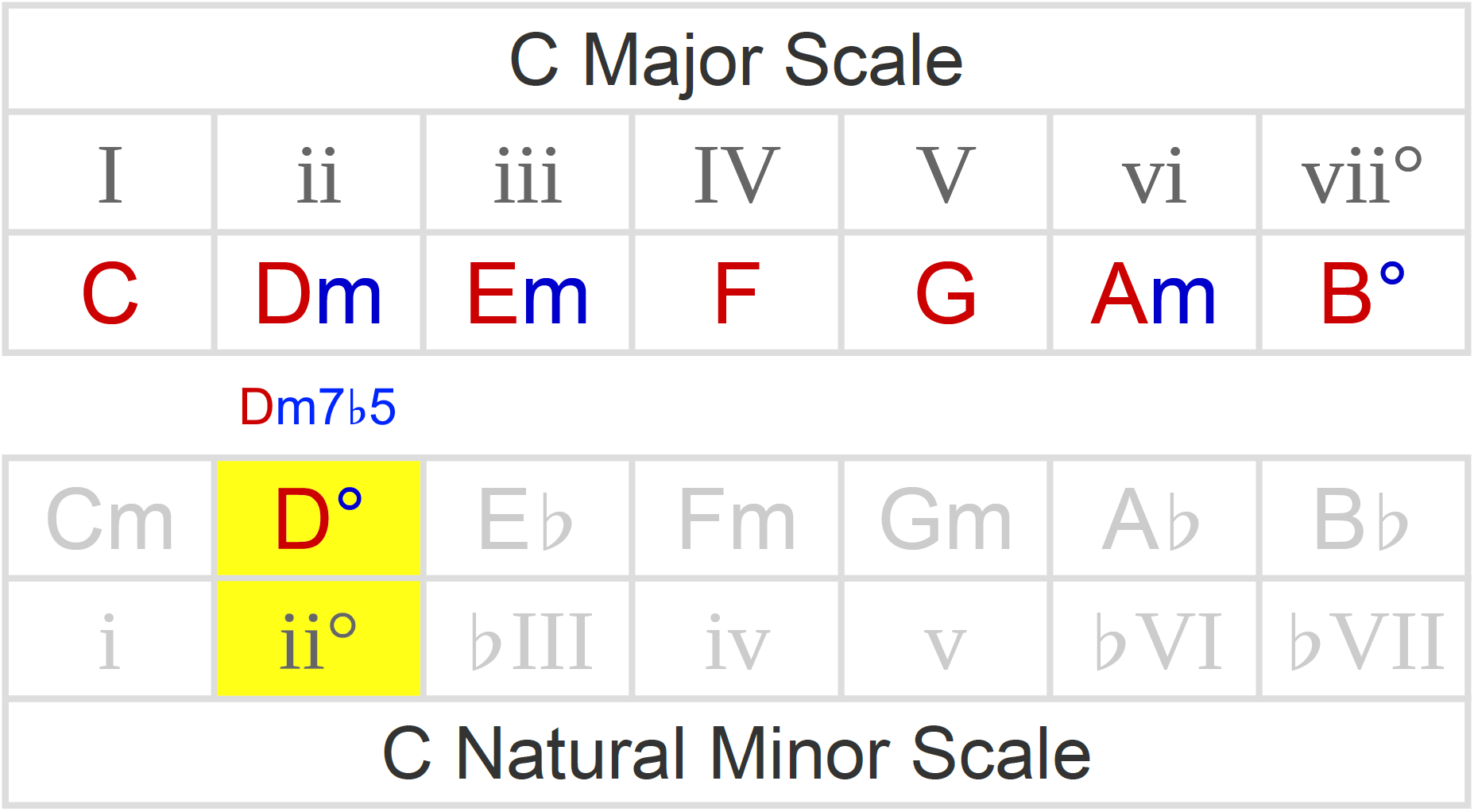 Sometimes you'll hear the 2 chord in major keys changed from minor to a m7♭5 chord. And this has quite a beautiful effect...


The borrowed diminished 2 chord also functions in a similar way to the minor 2 chord, as part of a 2 5 1 cadence.

Here's an example of how we might change scales involving the borrowed 2 chord...

Finally, we might borrow the 7 chord from the parallel minor key, also known as the subtonic. This can be seen as two frets down from the tonic root.

In a major key context, the flat 7th degree (♭VII) would replace the natural 7th degree (vii°). In C major that's a substitution of B diminished with B♭ major.

Typically, you'll hear it played as a dominant 7th chord (so B♭7 in the C major key). 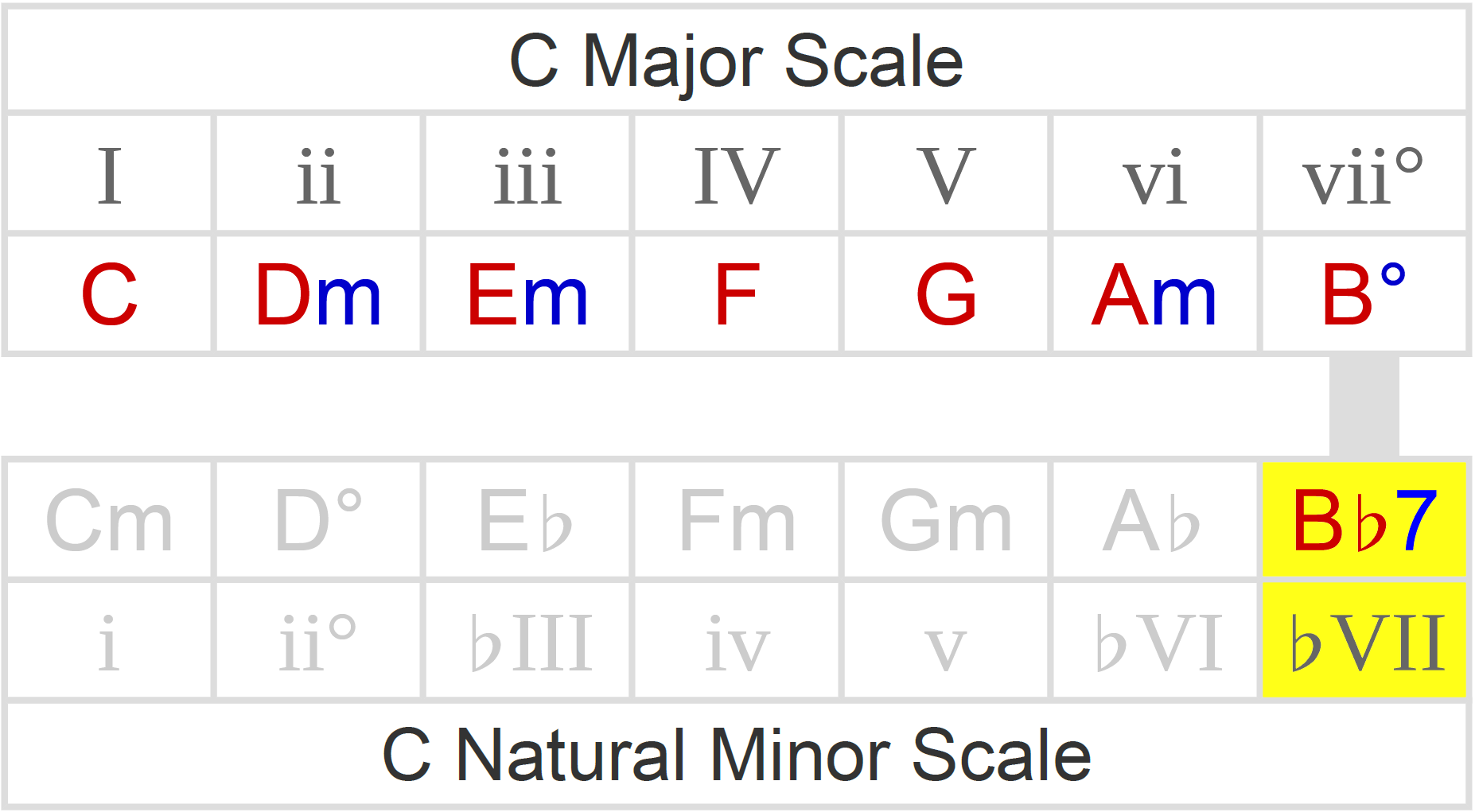 This flat 7th degree chord often functions along with the borrowed 6 chord (♭VI) as a climbing resolution towards the tonic...


Or immediately following the 4 chord whether major or borrowed minor...


And we can accompany this ♭VII chord using exactly the same scale change as before...

Borrowed Chords In Other Keys

So, in total there are five common borrowed chords that occur in major key music, all of which can be associated with the parallel natural minor scale, or its relative major scale.

Here's how this borrowed chord concept works in several keys... 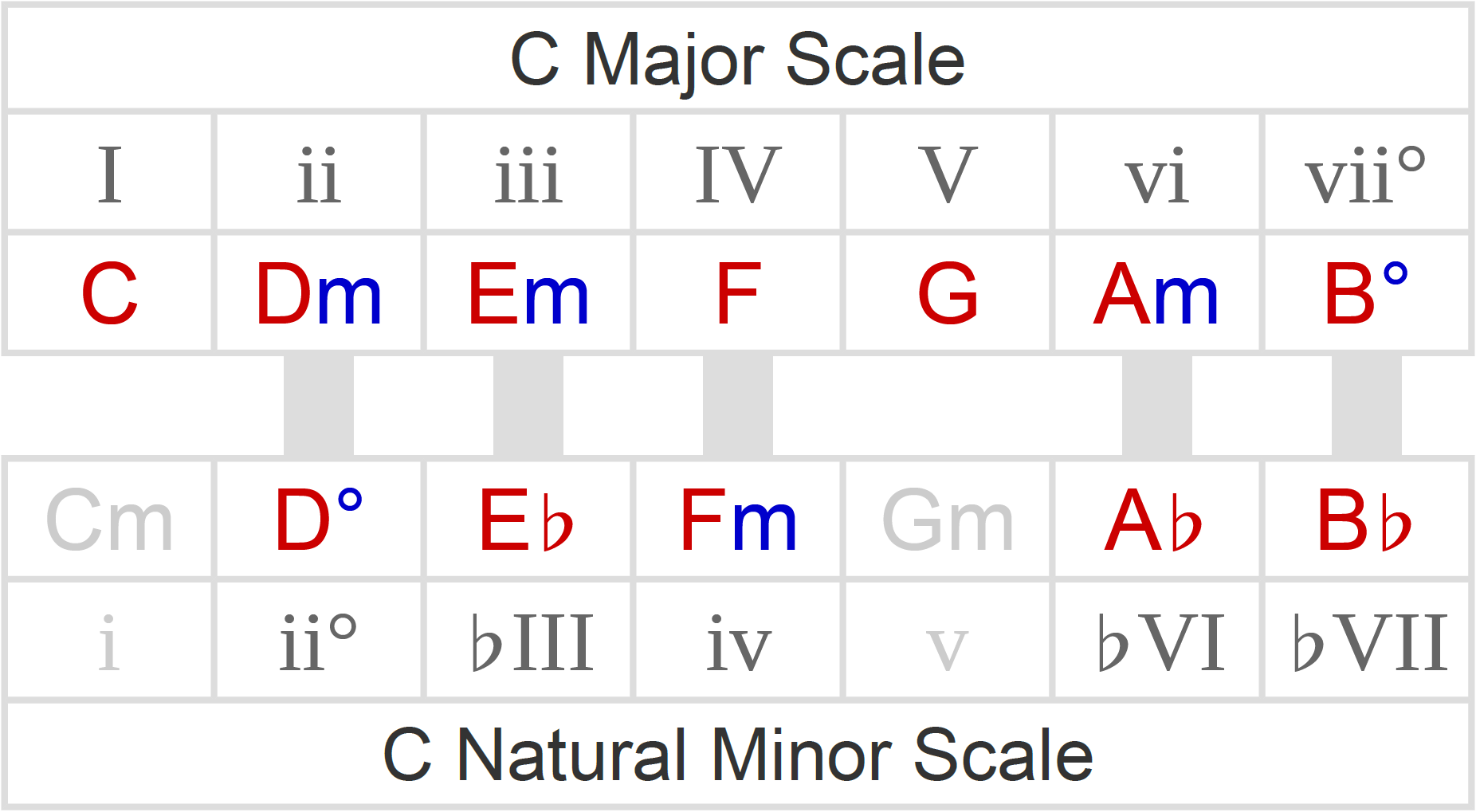 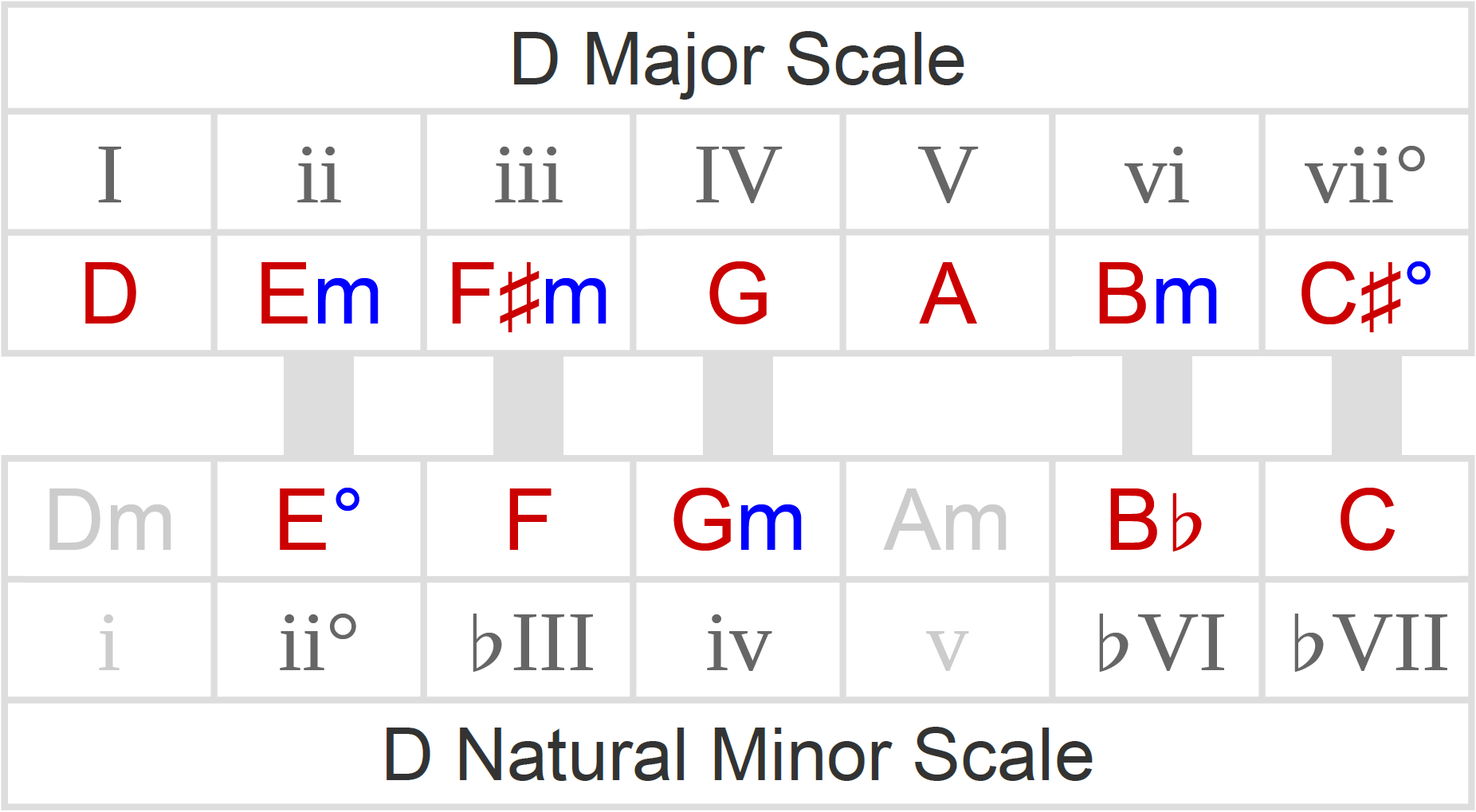 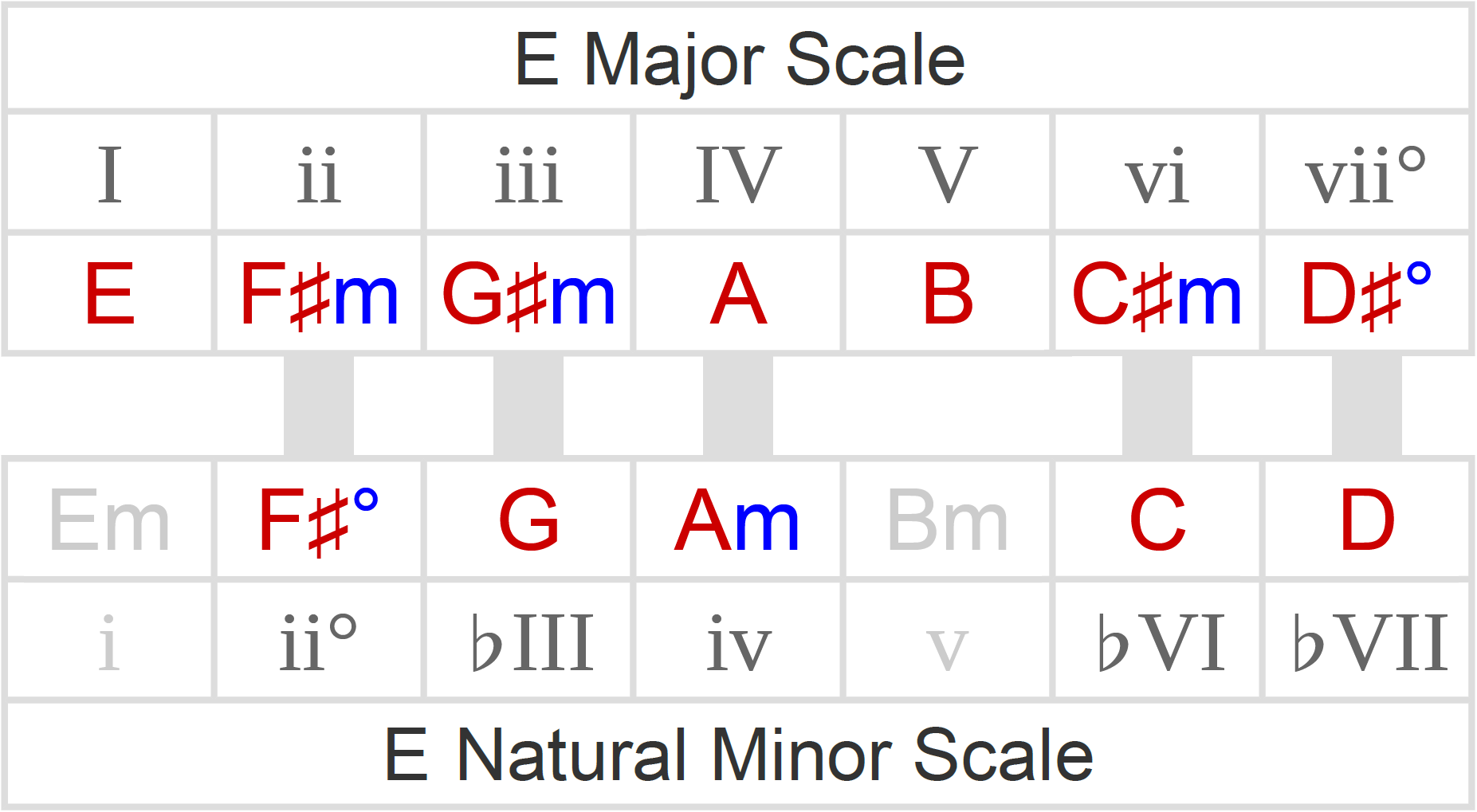 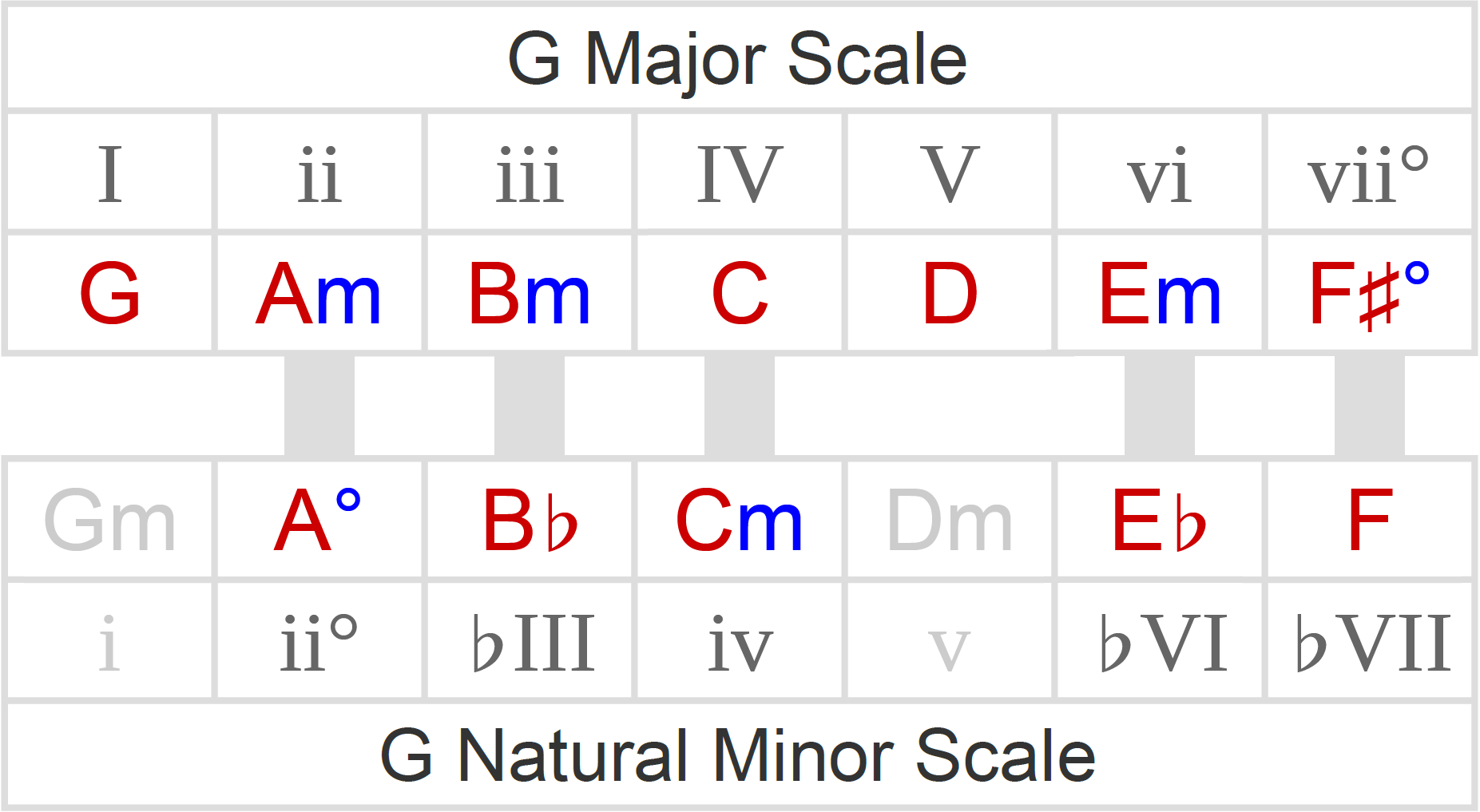 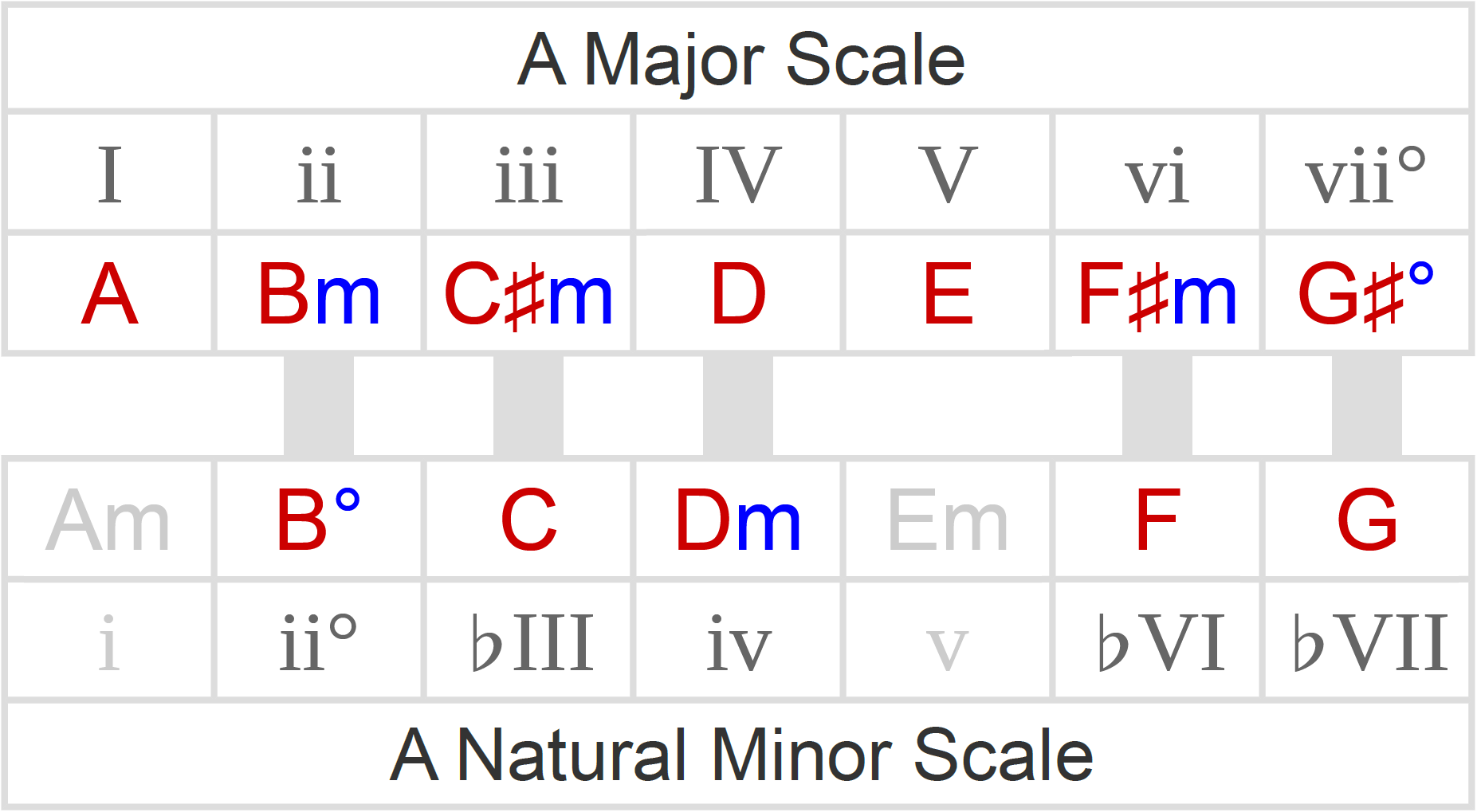 If the chords are seventh chords as opposed to simply major or minor, this might change the notes we use.

The five borrowed chords we looked at have their own "natural" seventh types that will work with the parallel minor scale...

Another way of seeing it that these chords, borrowed from the parallel minor key, use the same sevenths and extensions as they would in their natural minor key.

What About Borrowing From Modes?

Sometimes, when a chord change takes us outside the natural key and parent scale, the outside chord can be seen as borrowed from modes such as Lydian, Mixolydian and Dorian.

In a coming part, we'll look at a type of chord borrowing known as modal interchange. In the meantime, spend time getting to know both the natural major and minor keys (use the chord tables from earlier to help) so you can spot these rebellious outside chords when they occur.

In most cases, they will be borrowed straight from the parallel natural minor key. So this lesson lays a strong foundation for getting to grips with the borrowed chord concept.