One example is if you're using a lot of gain or distortion and need more clarity and punch in your chord playing, or just some more intricate alternatives to the standard power chord forms.

Another is if you're using percussive strumming rhythms (hear example) or picked rolls and you want a tighter sound.

In this lesson we'll explore some cut down chord shapes, often called shell chords or closed harmony, that allow for quicker, more tightly voiced chord playing. It'll show you how even the simplest chords can sound colourful. Let's start with an overview by watching the presentation below...

What Are Shell Chords?

Simply put, shell chords are a form of economising whereby we use chord shapes that consist of only the most important tones of the chord.

So with major and minor triads, for example, we'd only need three strings to make the chord. With seventh chords, we might leave out the 5th so we're still only using three strings. It's about cutting down the chord as far as possible whilst retaining its recognisable quality (major, minor, diminished, dominant 7th etc.)

In jazz, the rhythm part will typically involve comping using shell chords to allow the soloist the freedom to build a number of different harmonies and melodies. The idea is that, the fewer the notes in the background, the more creative room the lead instrumentalist has to express their interpretation of the piece.

But generally speaking, shell chords are just simplified chords that have their own specific sound.

Remember, these shapes are movable, so you can position them at any fret, just like barre chords. As demonstrated in the video, we can add a 9th or major 7th to the basic root-5th power chord shape for some distortion-friendly colour... 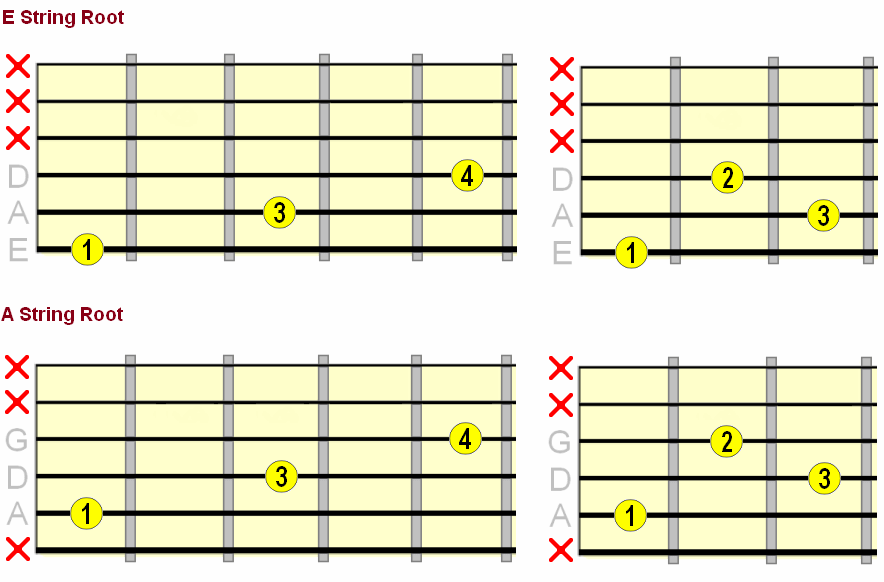 Here I've tabbed out the examples I used in the video. You can use these as exercises or just inspiration for coming up with your own ideas.

Starting with a simple exercise moving between E and A string shell forms (click the tab to hear)...

Here I alternate between suspended 4th and major shell forms...

And something similar using an augmented 5th...

Finally, I introduce chromatic movements to some of the shell forms we've learned. Great for phrased picking...

I hope you've enjoyed this lesson! Of course, you should spend time coming up with your own ideas. Once you're confident with the shapes, it's just a case of combining them through trial and error. As always, let your ears be the judge.