Minor Phrygian falls as the third mode of the major scale. So we're now centering our harmony and melody around the major scale's third degree. This creates a minor 2nd (♭2) interval from the degree's tonic that gives Phrygian its distinctive sound, which you could describe as a traditionally flamenco or middle eastern flavour.

While not as commonly used as other minor modes (such as Aeolian and Dorian), you will hear Phrygian movements show up occasionally in music old and new. Outside its traditional use, you'll mostly hear it in progressive rock and, more recently, heavy metal. Again, it's that ♭2, in a minor context, that attracts musicians to Phrygian.

Once you get to know "that Phrygian sound", you'll be able to distinguish it easily from other minor modes/scales. By jamming your way through the tracks below, you'll not only train your eyes and fingers to its melodic patterns, but also your ears to its harmonic and melodic characteristics.

First use the single chord tracks provided (above the progression tracks) to get familiar with Phrygian's core sound. Focus on that ♭2 interval - because of its rather harsh, dissonant quality, it's best used as a passing tone. This means we don't hold or emphasise it over the backing chord, rather use it as a bridge towards a more stable tone (such as the 1 or ♭3).

Most Phrygian based movements tend to move to the ♭II degree, a half step up from the tonic (that's Phrygian's second degree major chord). For example, in E Phrygian, we'd move from Em to Fmaj. Another common movements is down to the ♭vii degree, a minor chord. This is the equivalent of moving between the iii and ii chords in the parent major scale. The difference is, we're not resolving to the I of the major scale, rather the iii.

When the chord changes, hear how Phrygian's tones connect to that new chord. Their sound will change based on the chord we're playing them over. For example, the ♭2 will become the root of the second degree chord, or the ♭3 of the seventh degree chord. However, it's more important to let your ears be the judge of what/where sounds good for each change. You can use familiar chord shapes as your guides for targeting tones over changes.

Build up your phrases in layers, approach target notes in different ways, ascending and descending. Experiment freely and combine pentatonic licks with runs from the full pattern.

Note that the "box" tab displays patterns formed around two familiar barre chord positions rooted on the 5th and 6th strings. These are a good starting point for finding your bearings.

Also, don't forget you can combine Phrygian with regular minor pentatonic and blues phrases/licks. But I've included some pentatonic patterns more specific to Phrygian's flavour to try out. 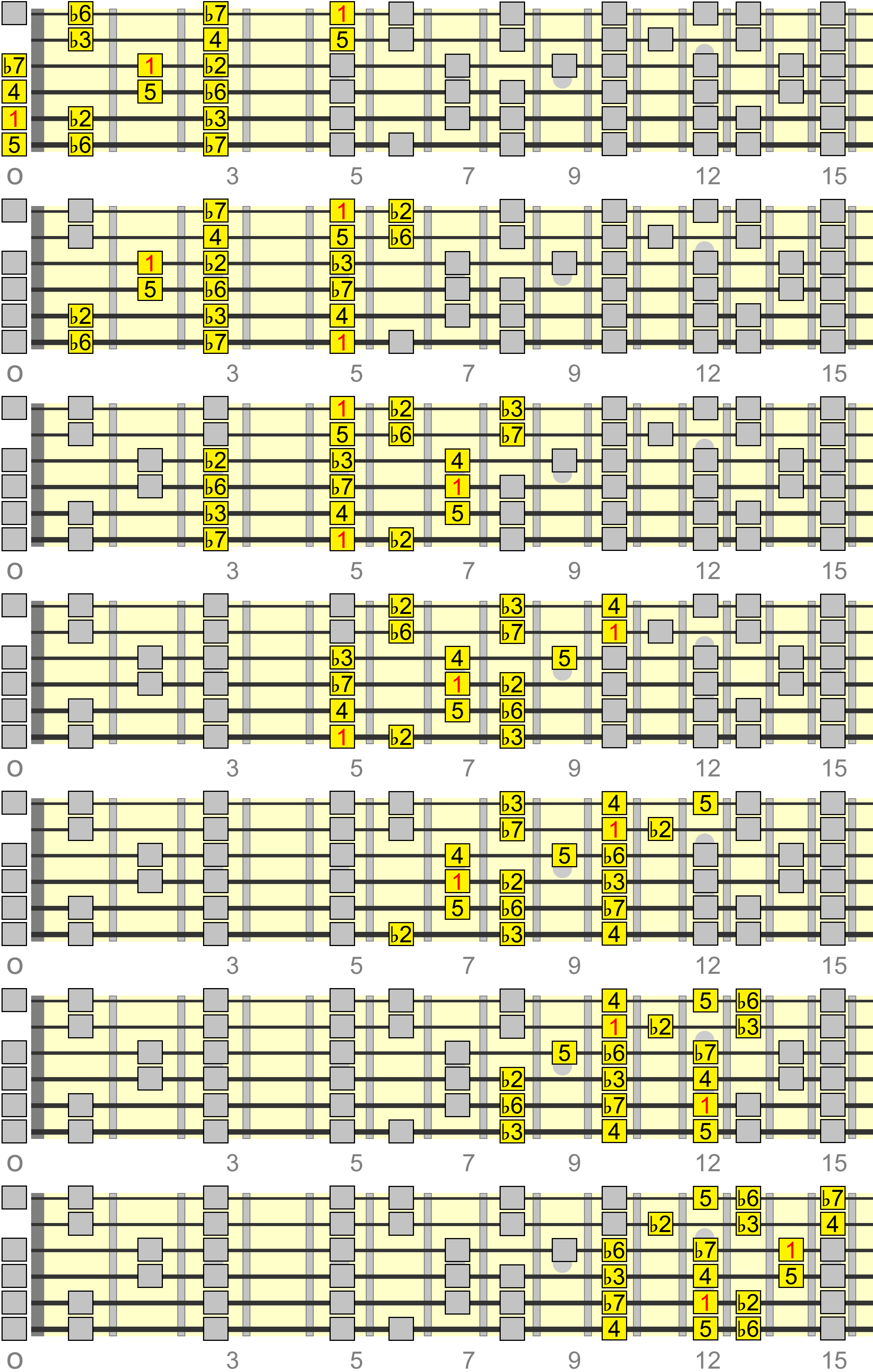 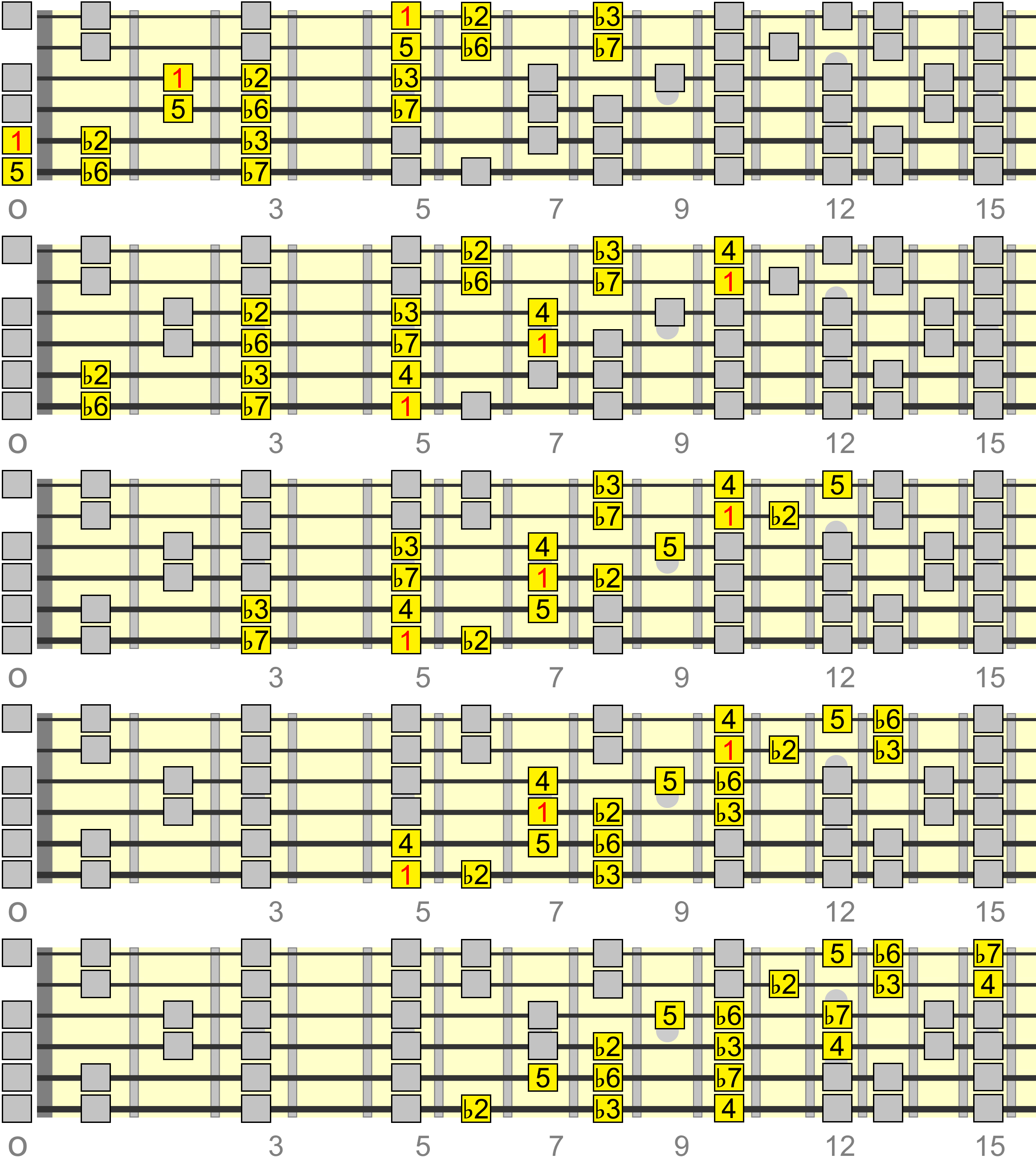 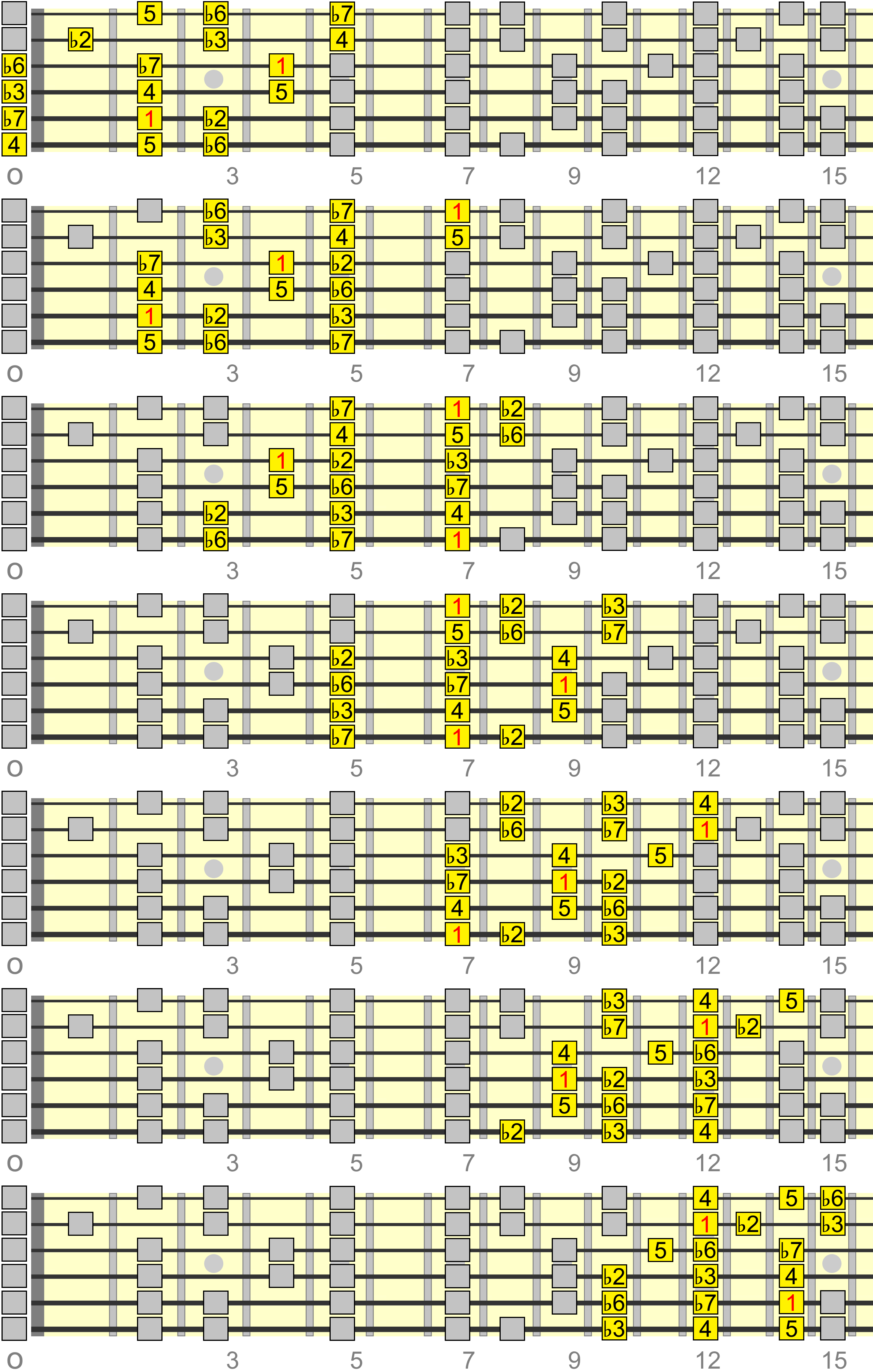 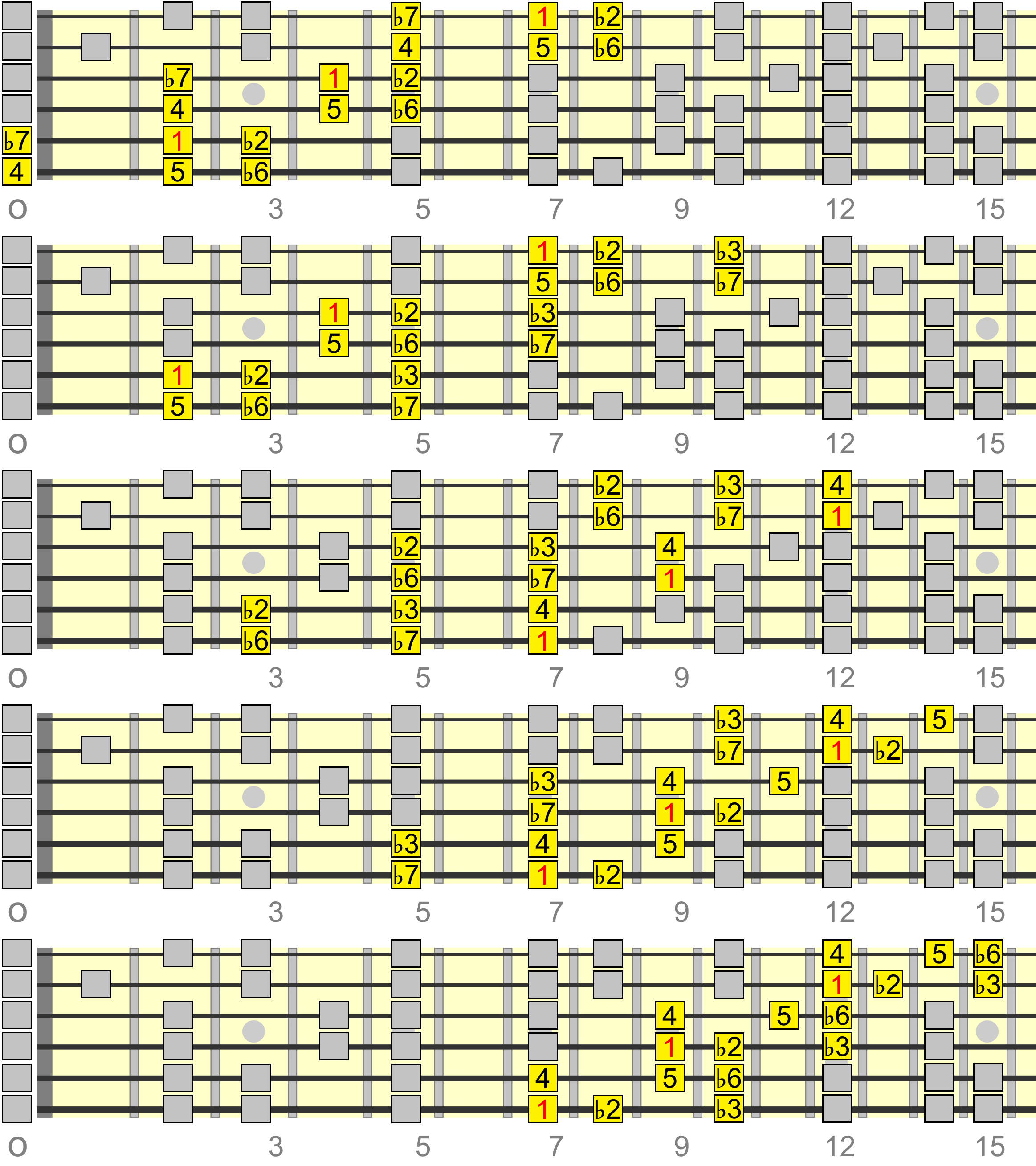 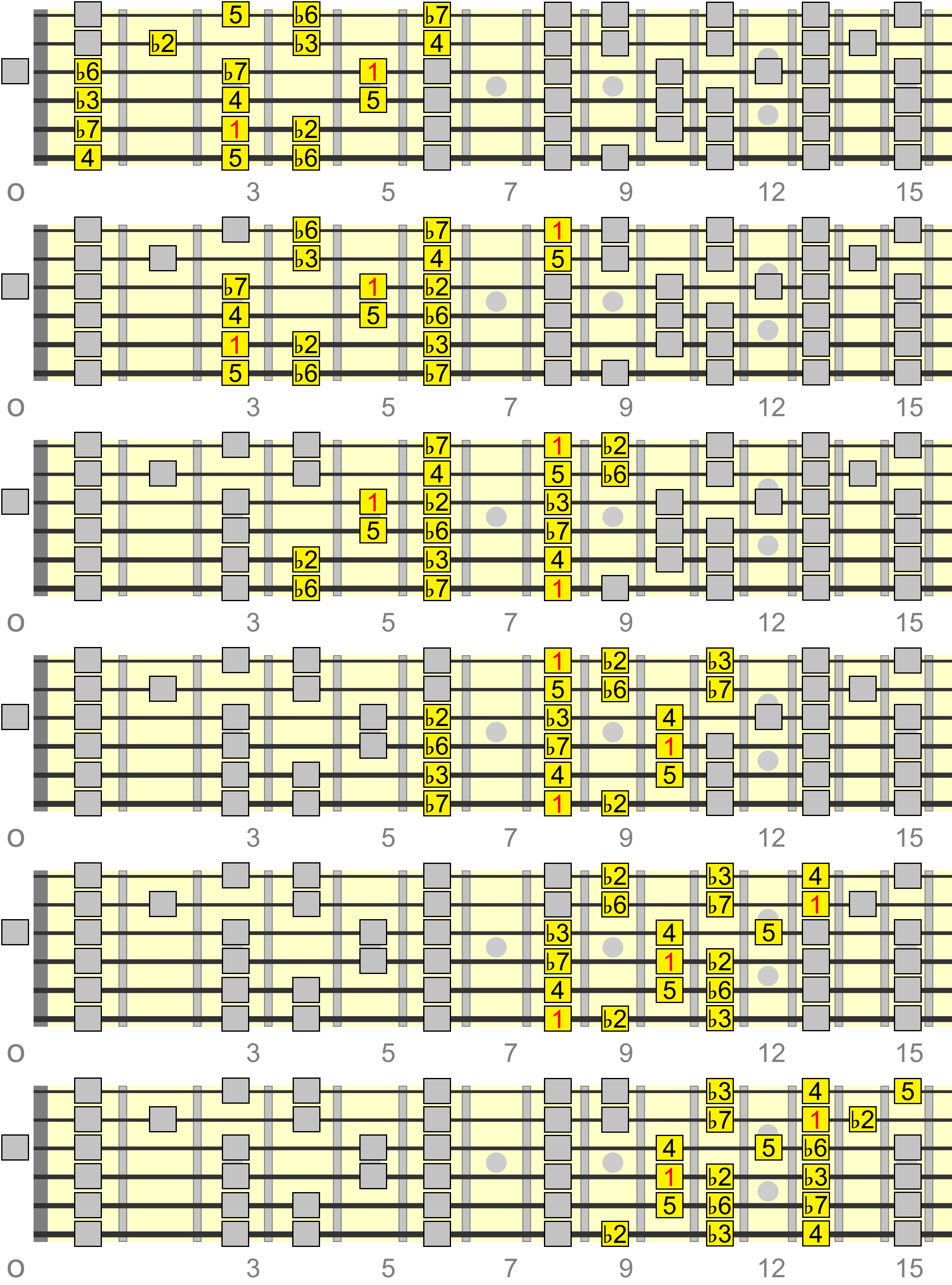 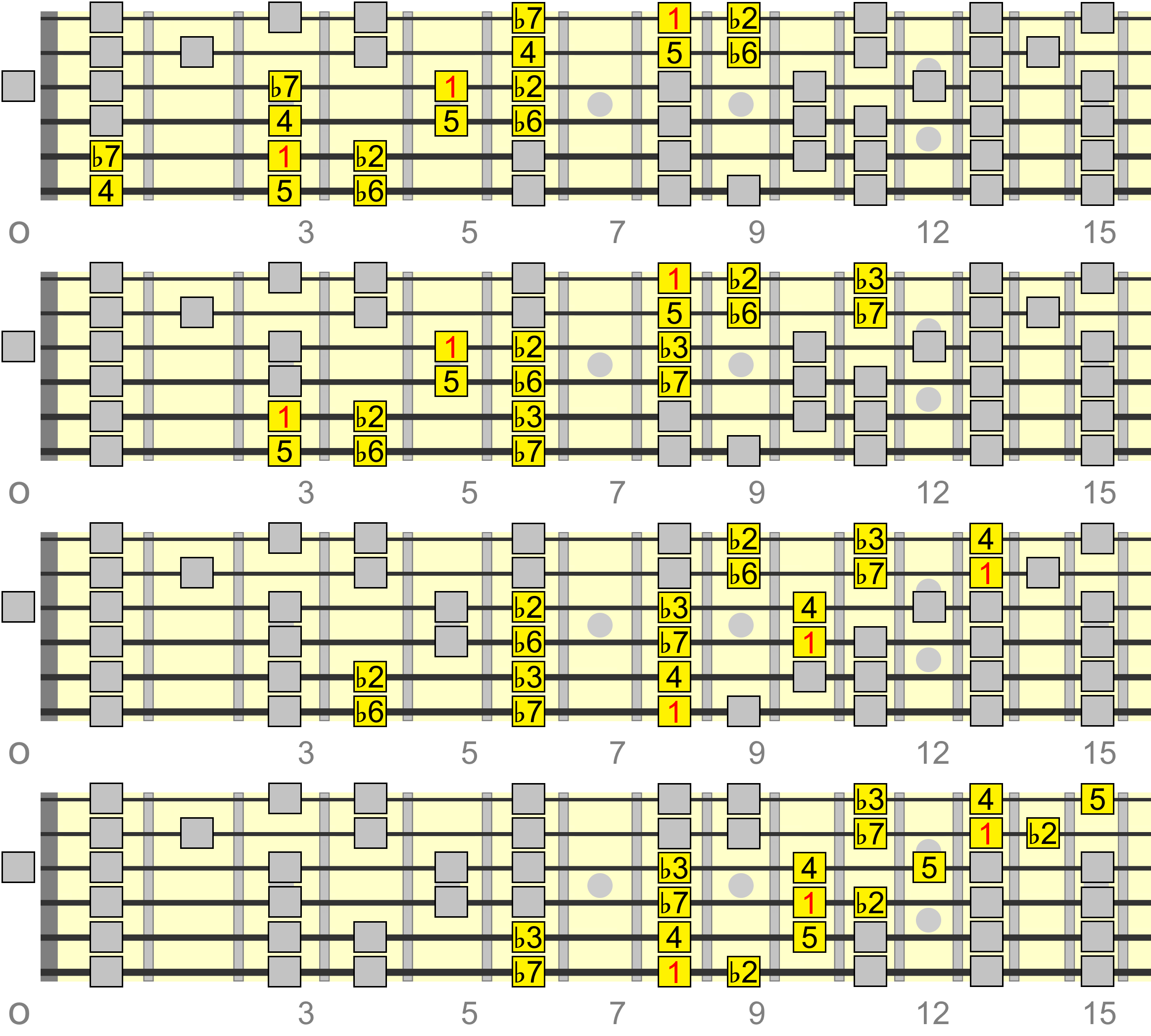 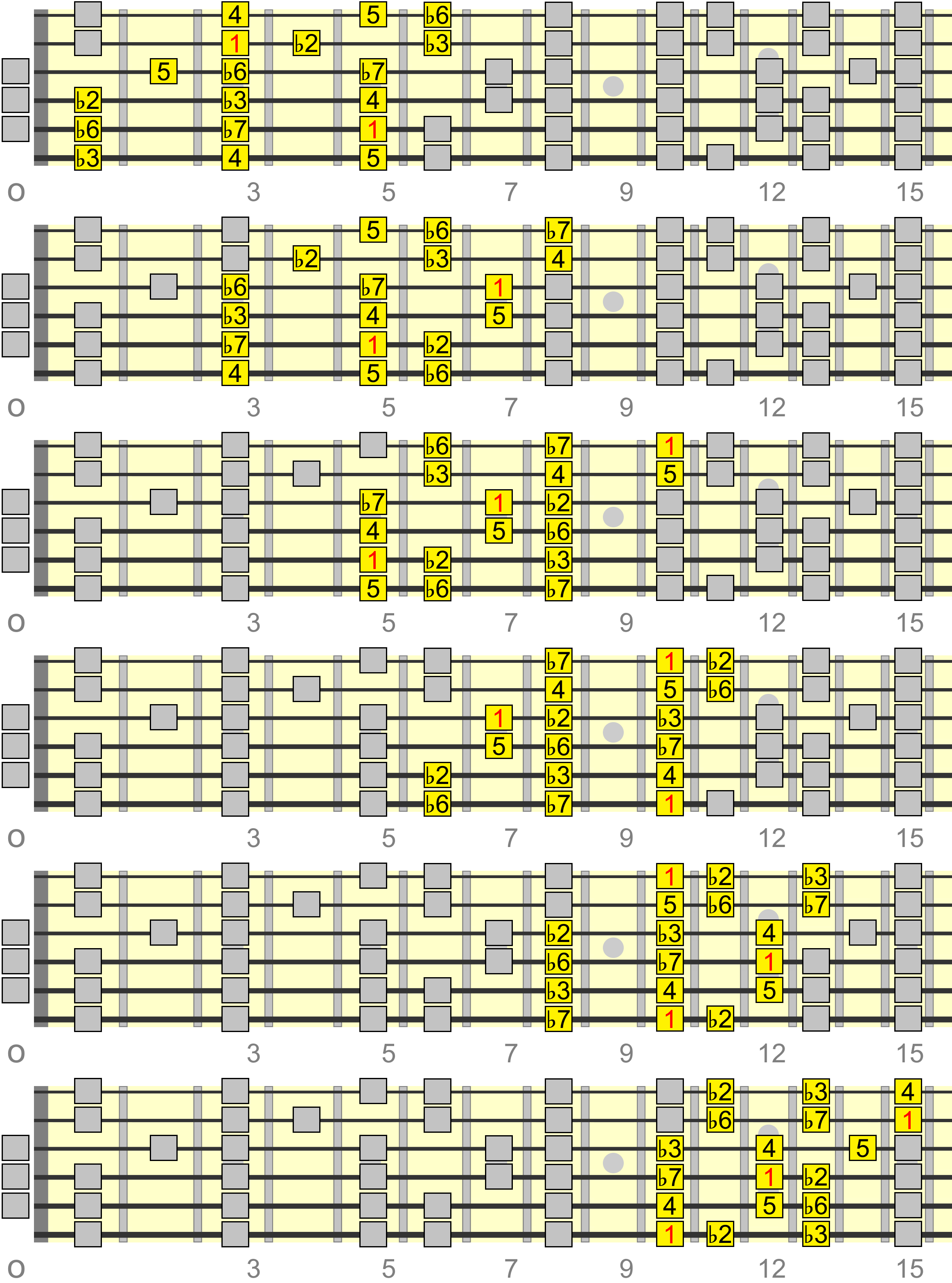 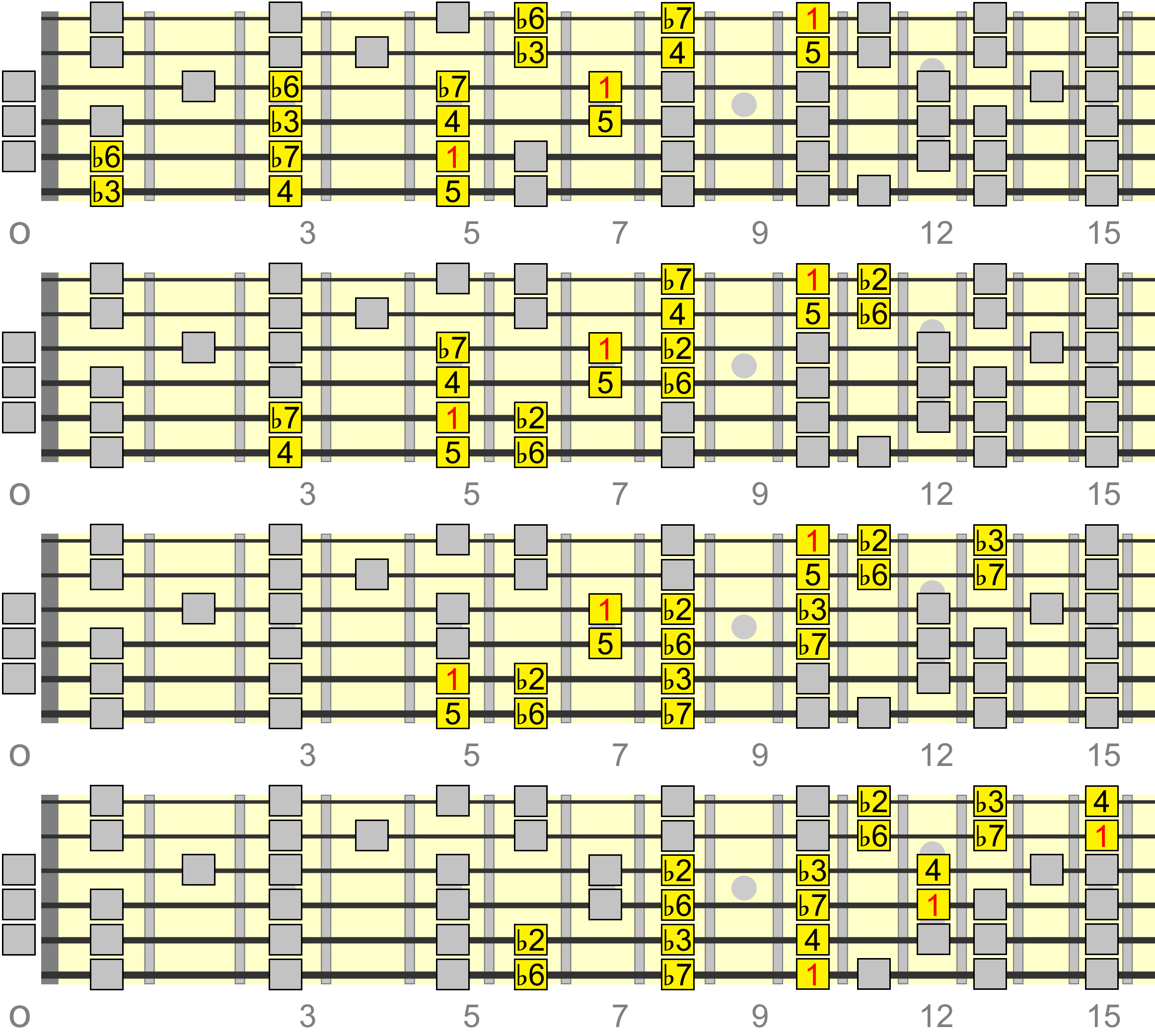 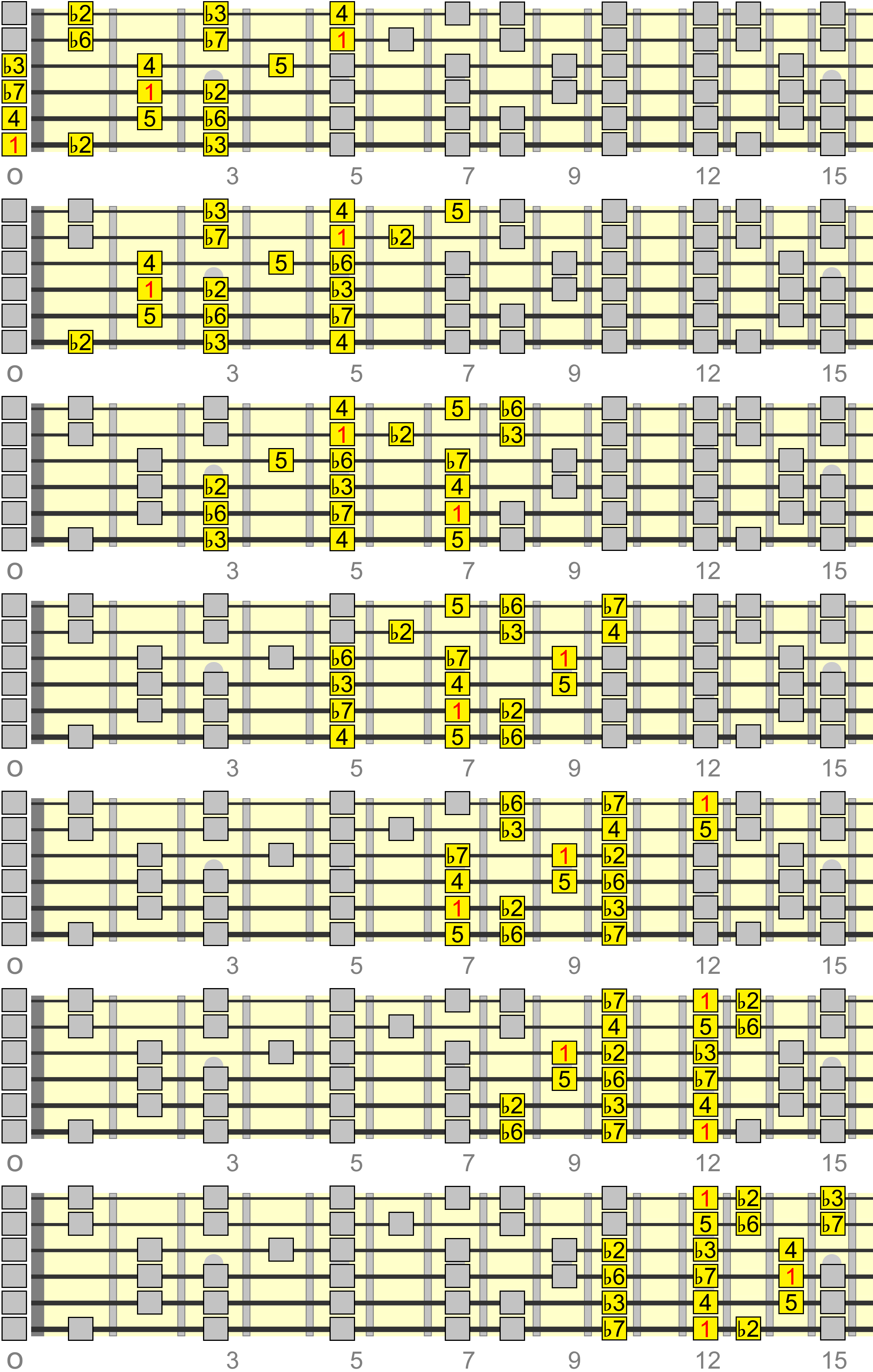 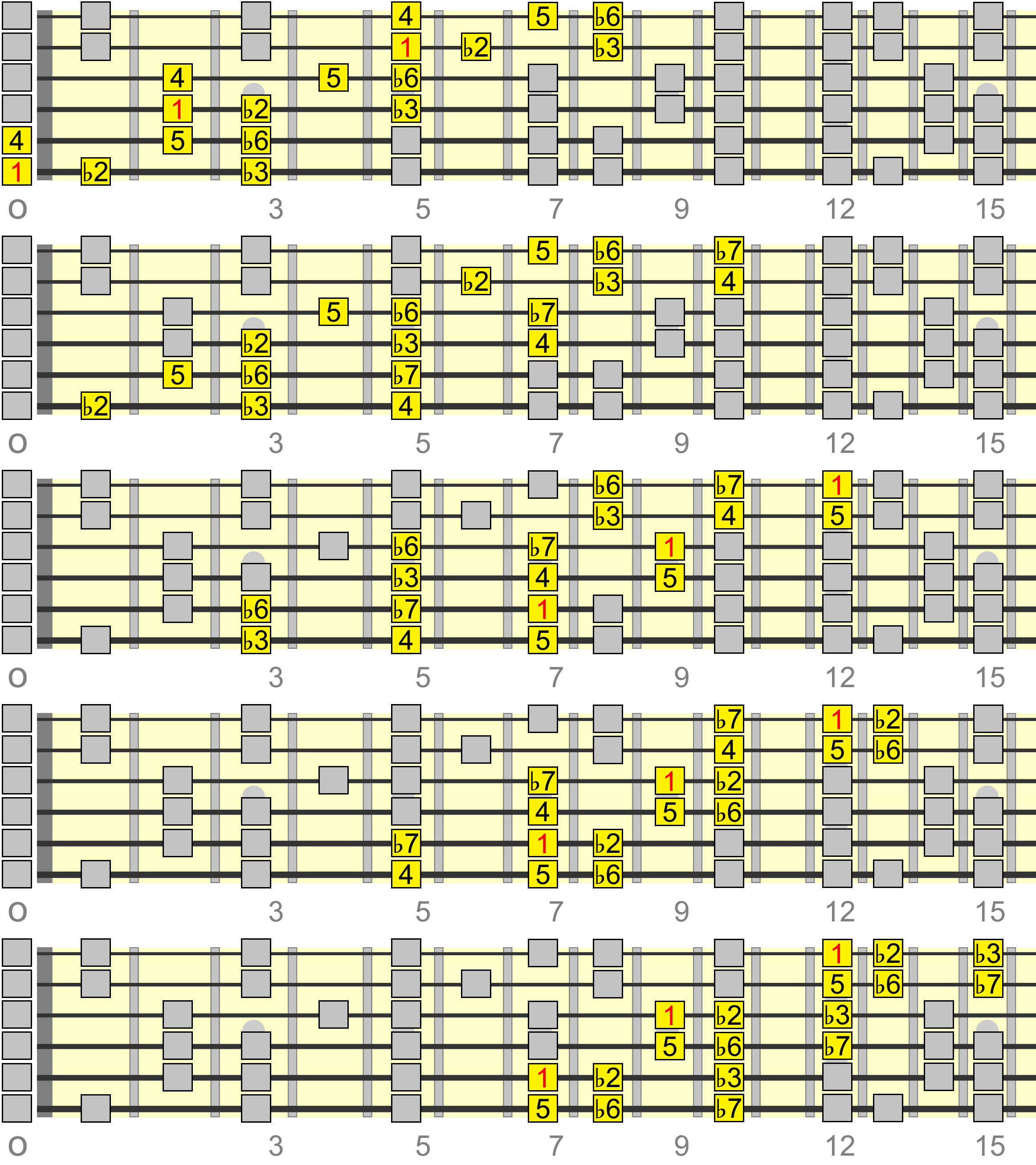 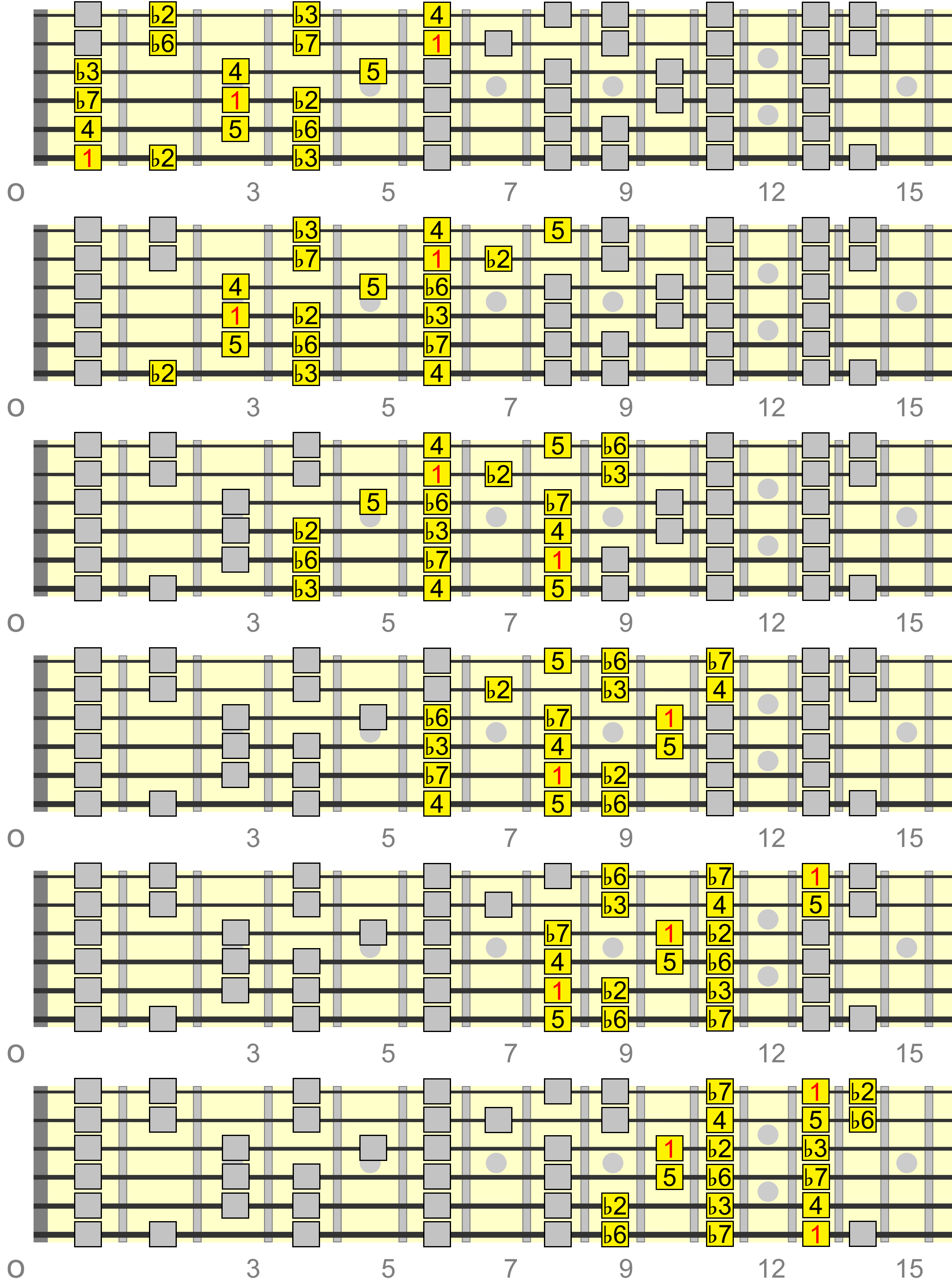 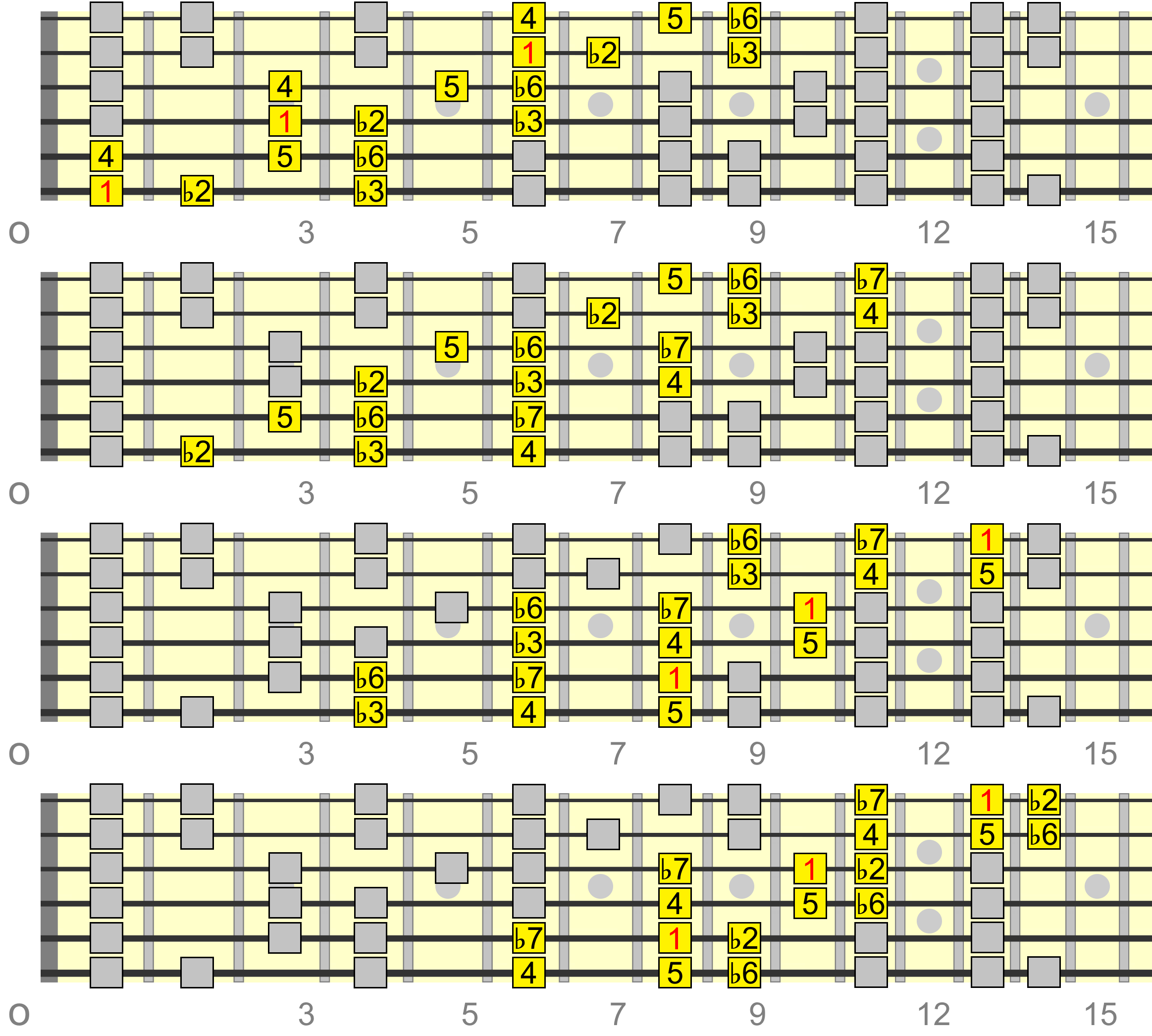 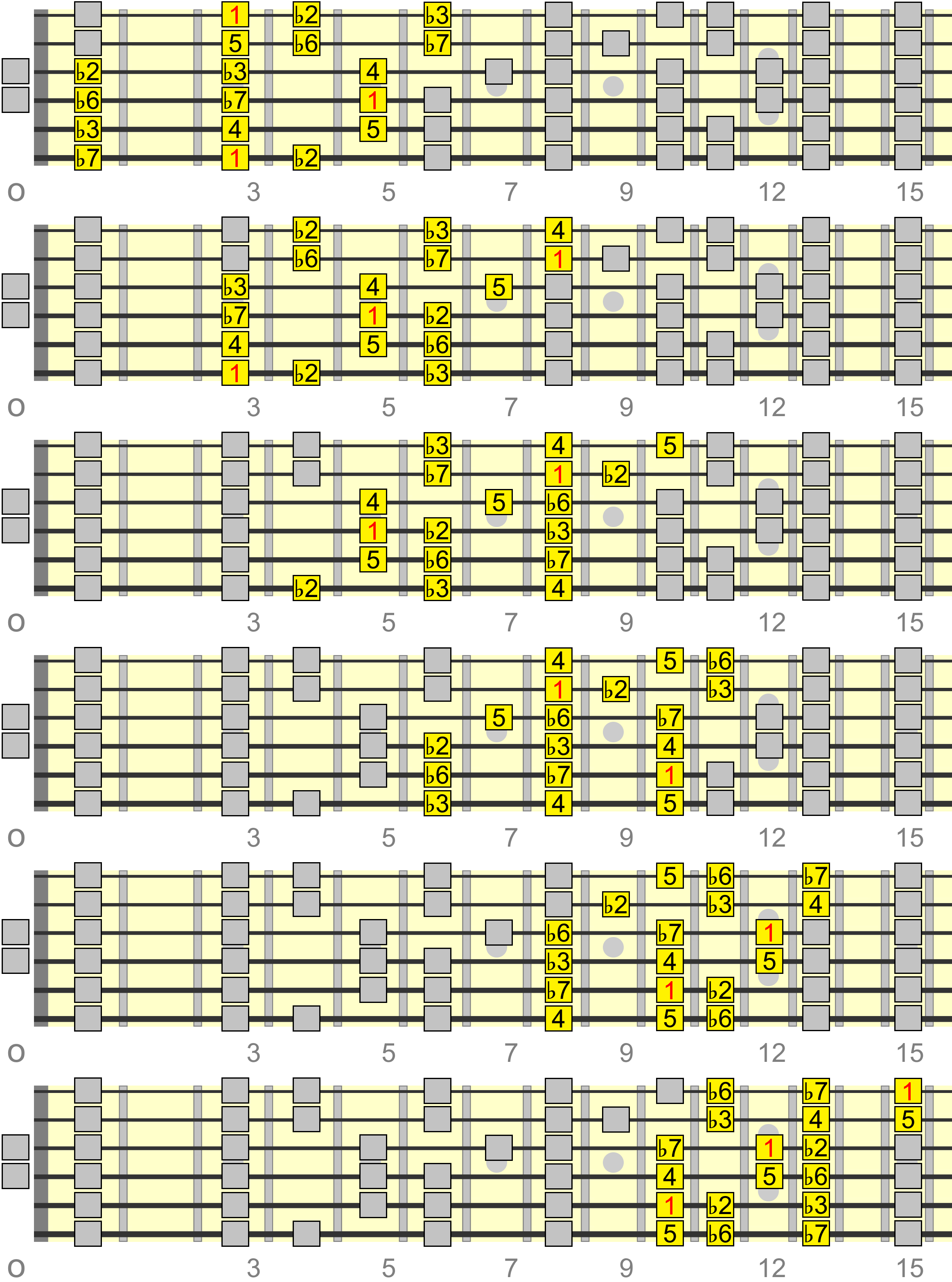 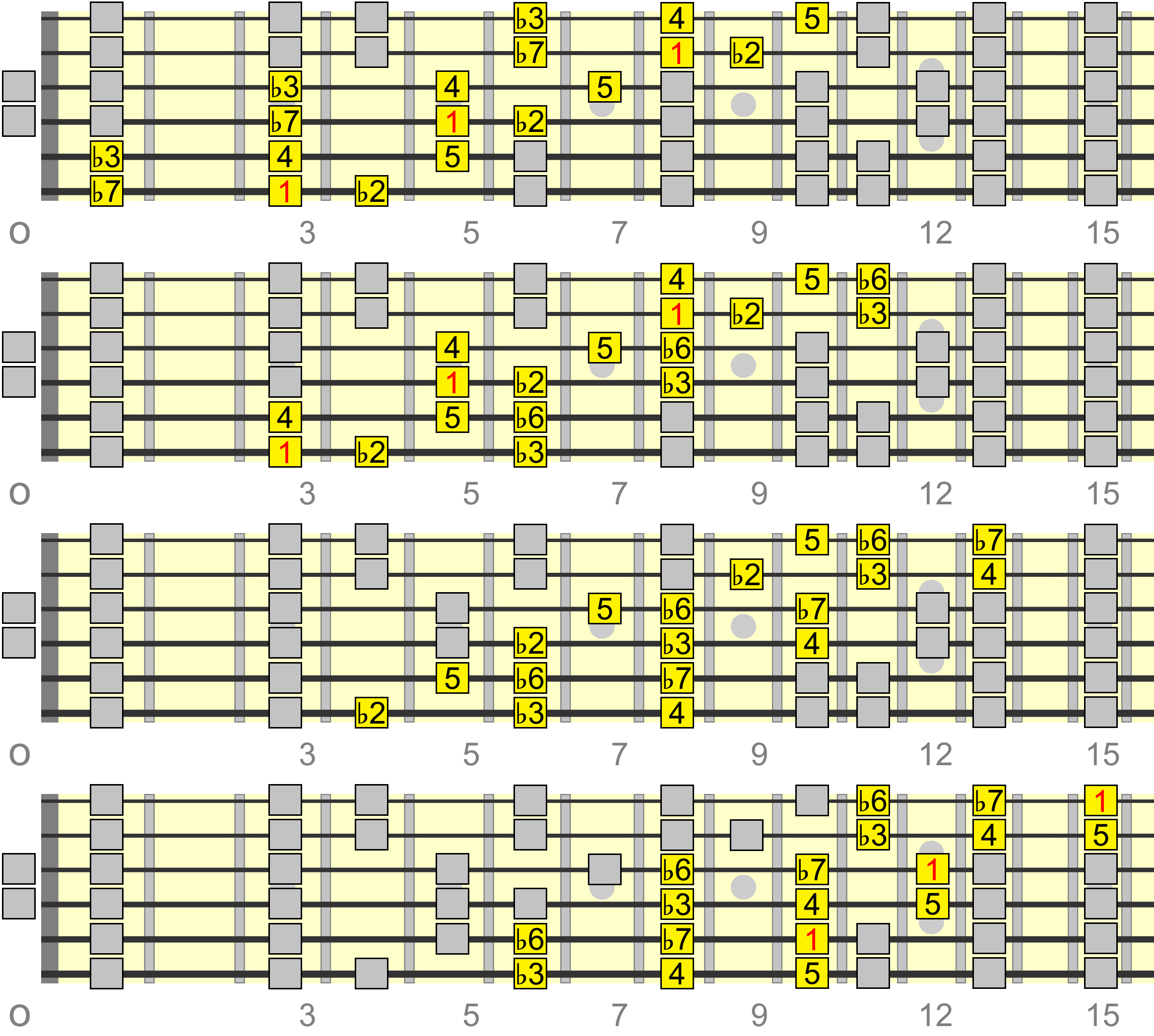 Modes of the Major Scale ►