How To Play The Mixolydian Blues

Most of us are familiar with using the minor and major pentatonic scales in our blues solos. But in major blues, there's a seven-tone (heptatonic) scale, Mixolydian, that can offer us more colourful, sweeter phrasing options.

Mixolydian is a great scale to experiment with in a major blues context. It'll give your blues licks a jazzier, richer melodic voice around those dominant 7th chords. The idea is to use it in combination with the more staple pentatonic scales.

Start by watching the video below, and then see further down for all the supplemental content you need...

Mixolydian works in blues because it includes all the tones that make up a dominant seventh chord (and its natural extensions) - the chord type used in most major/dominant blues progressions (e.g. A7, D7, E7).

So we have the 1, 3, 5 and ♭7 intervals that make up a dominant seventh chord, making Mixolydian a natural dominant scale.

Why am I telling you this? Because these will be our strongest target notes for our phrases and licks, as they connect directly to the backing chords.

The other scale intervals - the 2, 4 and 6 - can be thought of as "colour tones" that we'll use to flesh out our phrases, like "connect the dots".

Think of using the tones in this way and you'll never get lost when improvising!

As there are three chords in a standard blues progression (sometimes referred to as 1, 4, 5), we'll need a different Mixolydian pattern for each chord. Unlike scales such as minor pentatonic, a single Mixolydian scale won't cover all the chords. But it's not as challenging as it sounds!

Once you establish that 1 chord position, the 4 and 5 chord patterns can be made to fall into the same position.

Use the tabs below to switch between the 1, 4 and 5 chord Mixolydian patterns.

Once you're comfortable with changing between those patterns (take your time!), we can extend them to reach higher places on the neck - good for taking your licks up a level. See how the patterns from earlier (greyed out below) connect to the new three-notes-per-string patterns...

Tip:  Practice any phrases/licks you come up with in BOTH positions.

As covered in the video, it's good to know where these strong, dominant 7th chord tones exist within the Mixolydian pattern. This is so you can confidently target those tones in your phrases and also use them as arpeggios to provide the "skeleton" for your phrases (examples later).

Spend time learning where these chord tones lie in the 1, 4 and 5 patterns...

Use the following process to build up your improvisation skills...

In the video, we focused on the 1 chord. But you can also apply the following phrasing ideas to the 4 and 5 chords. Below are the tabs from the lesson examples (key of B♭)...

Practice targeting chord tones (the 1, 3, 5 and b7) within the scale pattern. Build simple phrases that resolve to each of these target notes. 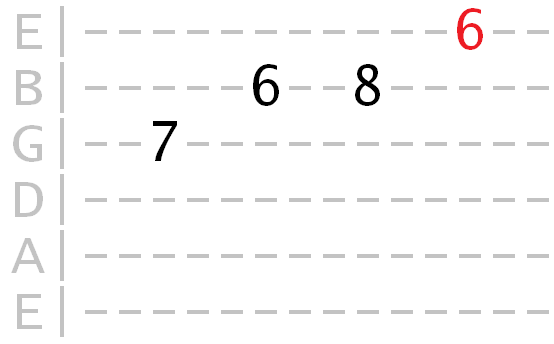 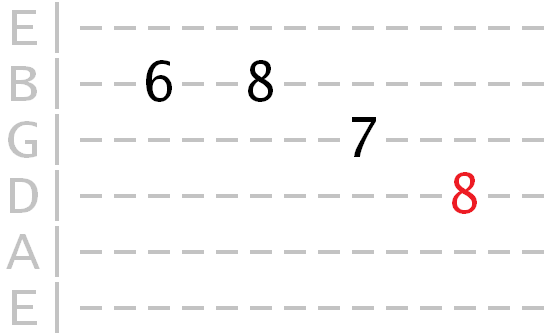 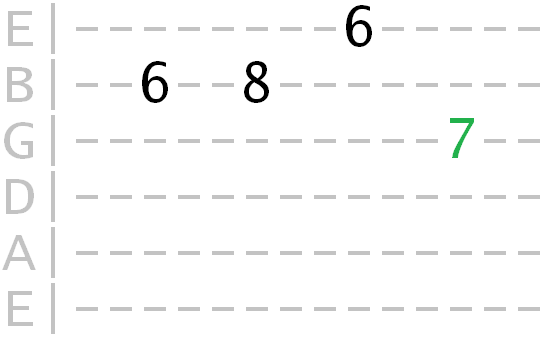 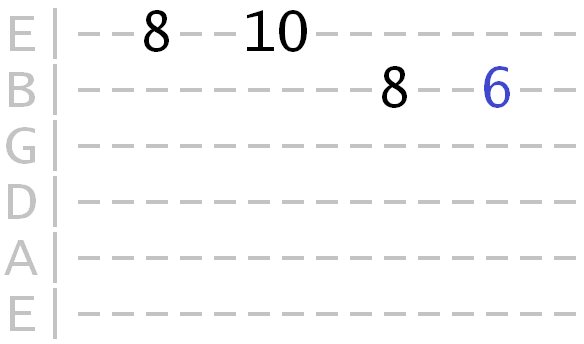 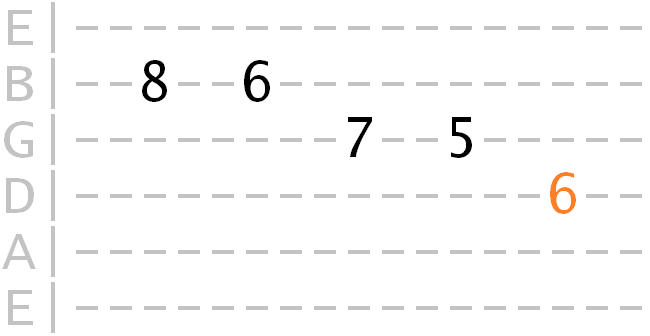 The chord tones can also be arpeggiated (played one after the other) as a lead-in to your phrases. So we're basically outlining the chord we're playing over and then "fleshing out" those chords using the colour tones from the scale...

We know that the major 3rd is a strong target note. But it sounds even better if we move to it from a minor 3rd, one fret down. For example, here's how we might visualise the minor 3rd in relation to the 1 chord pattern...

Here, I bend from the minor to major 3rd on the 1st string...

Another example, using a hammer-on...

Across the whole pattern...

The 4 of the scale naturally resolves down to the 3rd...

Practice these phrasing techniques on the 4 and 5 chord positions using the patterns from earlier. Hours of practice right there! But you can use the below backing tracks to keep it fun...

For each key, there's a slow and faster tempo. Obviously start with the slow track and then move to the faster one as your confidence improves. Select your chosen key using the tabs...

Time for a cold one, I think! Thank you for your time and patience. Hopefully, you'll have plenty to play with for weeks, months and years to come.

Blues really is a great style of music to develop your soloing skills, because it's relatively simple in form. With Mixolydian under your fingers, you'll be able to create those sweet, spine tingling solos that express what no words ever can, and that's what music is truly about. Live, breathe and enjoy it!

You can learn more about using scales in blues effectively here.