Minor and major pentatonic work great together in major keys and can "say" a lot more than if you were to just use one scale. This lesson will help you build licks that move smoothly between the two scales, in a blues context (but you can use what you learn in any style).

Start by watching the presentation below, and then learn more using the supplemental content (including backing tracks) further down.

Here's a simple 12 bar blues track with click track in the key of C (same one used in the audio examples in the video).

As promised in the video, here are some extended major/minor pentatonic patterns that will give you the freedom to move across more of the fretboard. Don't get boxed in!

I've greyed out the major pentatonic tones, so you can see how they relate to minor - hope it helps...

To test your memorisation of these patterns, use the exercise track below.

Here's how it works: you'll hear standard metronome beat at 60 BPM. Play through the scale pattern, starting on your chosen root (e.g. C) however you wish (don't worry about playing anything elaborate, just play from one note to the next, up and down if you want). I'd use eighth notes to start with. For example, here's me playing minor pentatonic over the track - click to hear.

At random moments, you'll hear a BEEP! That means "change from minor to major" or vice versa. Again, click to hear an example. The switch doesn't have to be immediate (go easy on yourself!), just make sure you keep time and change as soon as you can after the beep. It's supposed to test your ability to move between the patterns without too much hesitation.

If you're hesitating and taking, say, more than a couple of beats after the beep to change scale, go back and work further on memorising these patterns (with guitar in hand of course).

In the video, we looked at some ways to blend the two scales in a blues context, to ensure that we don't hang on dissonance for too long. After all, when mixing major and minor tonality, as we are with these two scales, there is going to be some dissonance through the chord changes.

Dissonance itself is not a bad thing - we often just need to resolve any dissonant tones to more natural tones over the particular chord we're playing over.

The table below shows you how resolve these more jarring tones found in minor and major pentatonic over each chord in a typical major key blues progression...


Note: since the 7 (major 7th) is not part of major or minor pentatonic, you need to add that tone to the pattern (this was shown in the video). Simply visualise it one half step (one fret) down from the 1 of the pattern.

However, I don't want to get too dogmatic over this. There's nothing "wrong" with holding that b3 over the 1 chord, for example. Sometimes you'll want that dissonant quality - to challenge the listener! But if you want resolution, the table above is a useful guide.

Let's start with a great example of mixing tones from minor and major pentatonic in a blues context, broken down for you in this video... 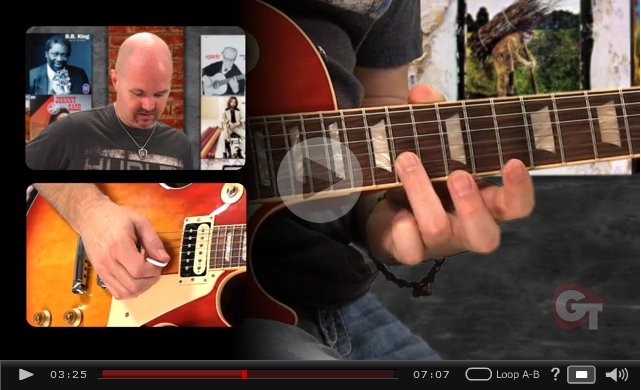 Below are tabs of the licks I used in the video at the top of this page. I'm sure you can come up with something a lot better - I mean it! The more you jam the more you'll learn what works and what doesn't. That's when intuition starts to take over.

Tip: when creating your licks, don't forget to add in bends, slides and legato (hammer ons, pull offs) to embellish and punctuate your phrases. For example, try bending or sliding into your target notes to make them more powerful.

Here, I hammer-on from minor 3rd to major 3rd (a common resolution over the 1 chord in major keys) and then bend (b) through the 6/b7 on the B string and the 2/b3 on the E string. These bends help to smooth out the transition between minor and major pentatonic.

Try also playing your licks an octave lower/higher to help you further memorise these patterns. Here's the above lick an octave lower (note that the / symbol means slide up, so 6 / 7 means "slide from the 6th fret to 7th fret)...

A more embellished run this time, using legato (hammer ons and pull offs) and finishing on that b3 - 3 resolution...

A chromatic (consecutive semitones) movement resolving to the b3 of minor pentatonic, which translates to the b7 over the IV chord - a strong target note...

Another strong target note - the major 3rd of the IV chord - and another example of mixing tones from minor and major. Here, I use a series of pull offs to decend the scale on the B string...

An example of using double stops to combine tones from both scales...

An example of arpeggiating the V chord as a "lead in" to a phrase...

Finally, a phrase on the turnaround (12th bar) V chord, targeting the 4 of the scale (which becomes the b7 of the V chord), preparing for the resolution back to the I chord...

I hope you enjoyed this lesson! Keep practicing merging minor and major pentatonic in your licks, and it'll soon become a natural way to add more color to your major key solos. Thanks for your time.

How to Solo Over Chord Changes