Double stops are a nice technique to add to your lead guitar repertoire. They're pretty simple - where you play two notes/strings together. Another name for them is dyads - two notes played simultaneously, whereas chords are 3 or more notes played at the same time.

This lesson will show you some double stop fingerings and exercises to get your fingers used to the physical application of playing two notes at the same time.

There's no hard and fast rule about when double stops should be used. They are simply used to complement standard, single string lead phrases to add a bit of colour and variation to solos and rhythm playing.

However, just as much of your standard phrases will draw notes from a given scale, so too must your double stops reside within a scale and/or key to ensure the notes don't clash with the backing music (unless, of course, you want them to clash!).

You'll hear double stops being used in music all the time, and they play an important part in general soloing technique. If you listen to Chuck Berry, he arguably popularised the use of double stop riffs.

Let's first get our fingers involved in the physical application of playing two notes together, starting with the barre technique. Look at the diagram below...

As you can see, both the B and G strings are marked. To fret these two strings together and create the double stop, we could simply use either our index (1st) and middle (2nd) fingers or middle and ring (3rd) fingers.

However, it's often more efficient to use the barre technique with one of our fingers for reasons I'll come to in a minute. That means pressing one of your fingers (in this example, our index/1st finger) flat across the two strings as follows... 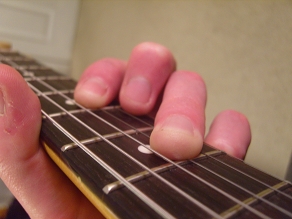 Next, we're going to use our 3rd/ring finger to apply the same two string double stop two frets higher as follows...

Played one after the other, it could sound something like this. A commonly used sequence in blues, funk and rock as part of a minor pentatonic based riff.

The best thing about using this barre technique is that it's like you're just playing one string. The two strings will play and move as a single unit and therefore you should be able to apply all the lead techniques you would to single strings - bend, vibrato, hammer-on/pull off, slide etc.

Obviously these two-string formations can vary in their positioning on the fretboard. They don't always involve the use of a barred finger.

For example, we might use the following double stop formations (I'm using the top 2 strings in these examples but they can apply to any two strings)...


It's important to get all your fingers involved so that you can apply your ideas freely, without any physical constraint.

There are also double stop formations that involve a "skipped string" as follows...

If you're using a plectrum with these skipped string double stops, you'll need to somehow mute the string inbetween. The easiest way to do this is to relax back your finger and touch the skipped string, effectively muting it.

You can then "strum" across the two fretted strings without unwanted notes being hit.

Before we delve into the theory behind choosing the right double stop patterns for your solo, try the below exercises to help set in that muscle memory. They make use of several of the formations we've looked at in this lesson.

Simply down pick or finger pick each pair of notes simultaneously in the sequence...

Next: Exploring the Neck In 6ths