Learning your favourite solos is a great way to develop new playing skills. It also gives you something to play on demand, which is always a confidence booster!

But while tabs show us where to put our fingers, there's often an awkward disconnect between learning a solo visually and how it actually sounds.

For example, tabs can't help you with things like timing and attack. They can also be inaccurate.

So it's important that, when learning a solo, you do so both visually and aurally. I would personally advise you to keep your tab reference to an absolute minimum, because there's a powerful skill that can emerge from focussing on aural learning.

The more you practice transferring what you hear on to the fretboard, the more you exercise the part of your brain responsible for internalizing music - your "inner ear". All the greats had/have this ability. You can have it too.

It's the ability to hear a piece of music, even just a couple of chords or notes, and know what movement has been made. You can then transfer that movement on to your instrument. This translates into skills such as improvisation and collaborating confidently with other musicians. It also means you rely less on visual cues, which aren't always available.

Impossible? Absolutely not, but if this ear skill doesn't come naturally to you, you will have to spend time developing it. It's worth it, though - the rewards are immeasurable.

Now, the problem is, when starting out, that solos often move too quickly for your ear to pick up the individual notes. So the first thing we need to do is slow it right down to a comfortable pace.

To do this, we shall seek the aid of a handy (and free) piece of software called Audacity. Download Audacity here, install it on your computer/device, load it up and then follow the steps below... 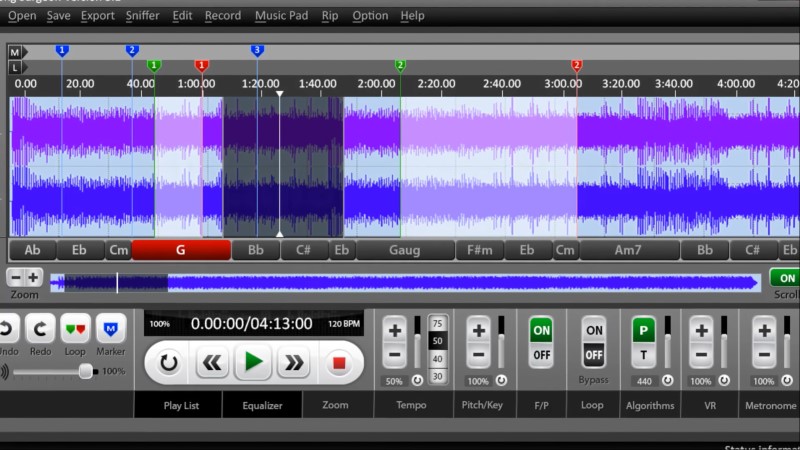 Side note: if you're not very "computer savvy" then I'd recommend taking a look at Song Surgeon for an easier way to slow down and learn songs.

It also offers additional features such as reducing the volume of vocals and chord detection.

If You DON'T Have the Song on Your Computer

Skip this step if you already have the audio file.

If you don't have an MP3 or sound file of the song you want to learn on your device, it may be on YouTube. Search it up on YT and find the best quality version.

If it's not on YouTube, search for it on Deezer.

What we're going to do is use Audacity to record the solo part (or any part you want to learn) as it plays.

Fire up Audacity and select stereo mix next to the microphone (recording) icon. This tells it to record what you hear coming out of your speakers...

Next, find the part you want to learn on the YouTube video or Deezer song timeline.

Click record (large red circle button) in Audacity and then, in your own time, hit play on the YT video or Deezer player.

You should see a blue waveform appear as Audacity records the music... 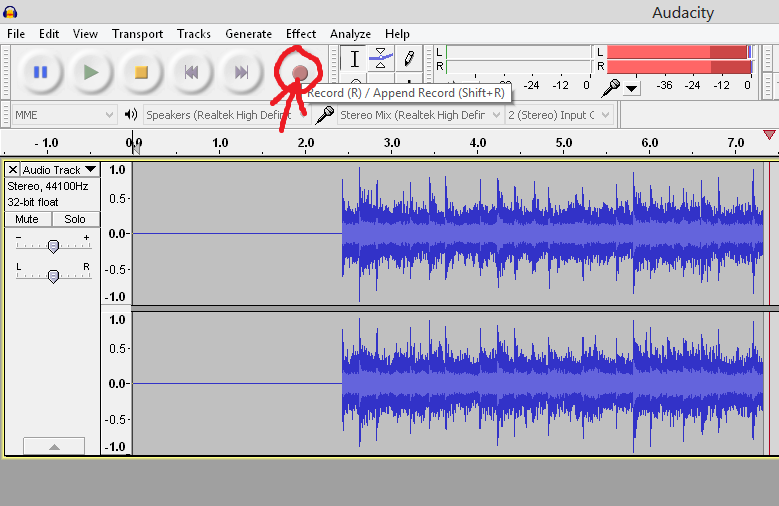 If you play back the recording and it's too quiet, increase the output volume in Audacity and re-record... 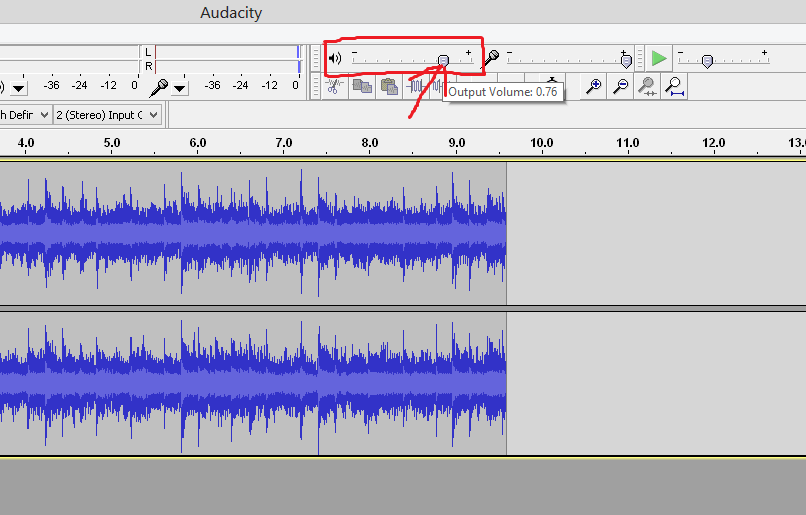 Now you have your music recorded, save it by selecting File > Export from the top menu and save as WAV (Windows) or AIFF (Mac)... 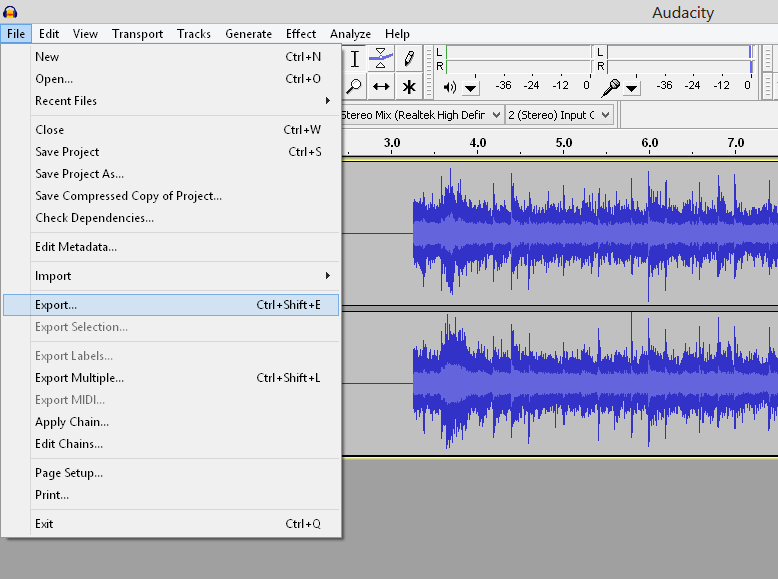 As we already have the audio ready in Audacity, we can skip the next part.

Got the MP3 or sound file you need? Load it into Audacity by selecting File > Import > Audio from the top menu... 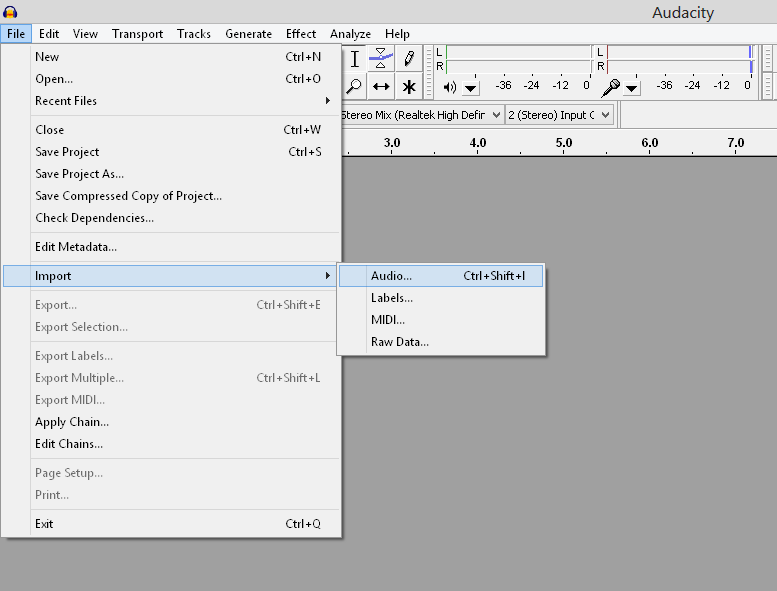 Find the part you want to learn by clicking on the blue waveform and then playing it (just press the spacebar to play) until you get to just before it starts.

Click the starting point for the part you want to learn. Now every time you press space, it will play from where you last clicked along the waveform.

Trim the audio by highlighting (click and drag, same as if you were highlighting text) only the part you want to learn... 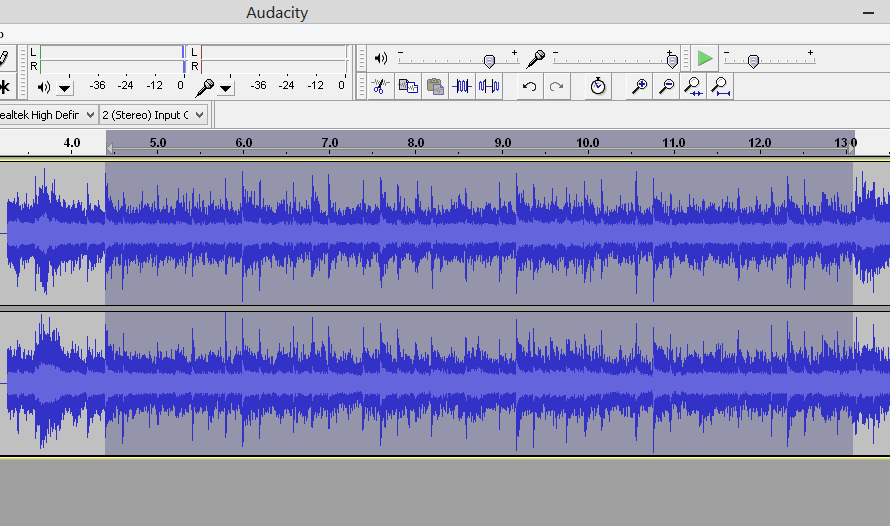 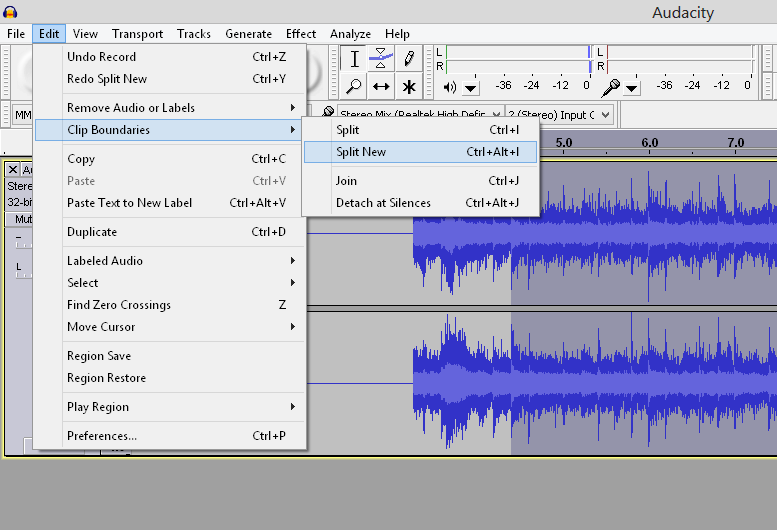 This will create a new track with only the part you selected displayed. You can then get rid of the original track above it by clicking the x in the top left corner of the track (not the entire window!)... 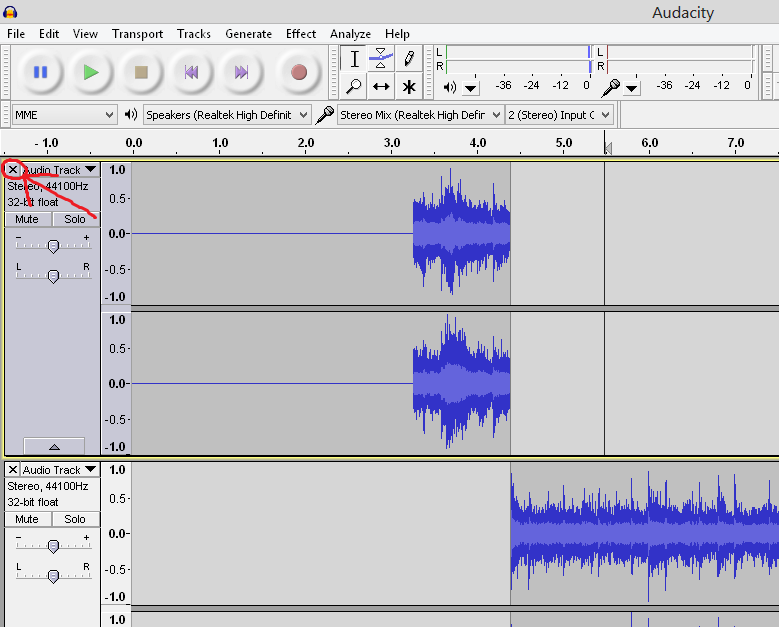 Slowing Down Audio in Audacity

Now to slow it down. Simply double click on the wave form so it's highlighted. 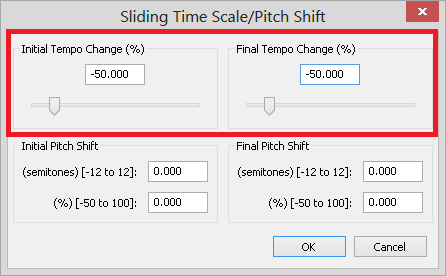 This is where the magic happens. Ignore the bottom section and set both "tempo change" sliders to -50%. So that's half the tempo of the original track. Click OK...

The wave form will have doubled in length, as we've effectively halved the tempo. Press space bar to hear it at its new tempo.

Half tempo should be slow enough for most solos, but if you want even more, try 75%.

Once you're happy with the tempo, break the solo down into "bite sized" chunks by click-dragging and highlighting small portions of the audio. 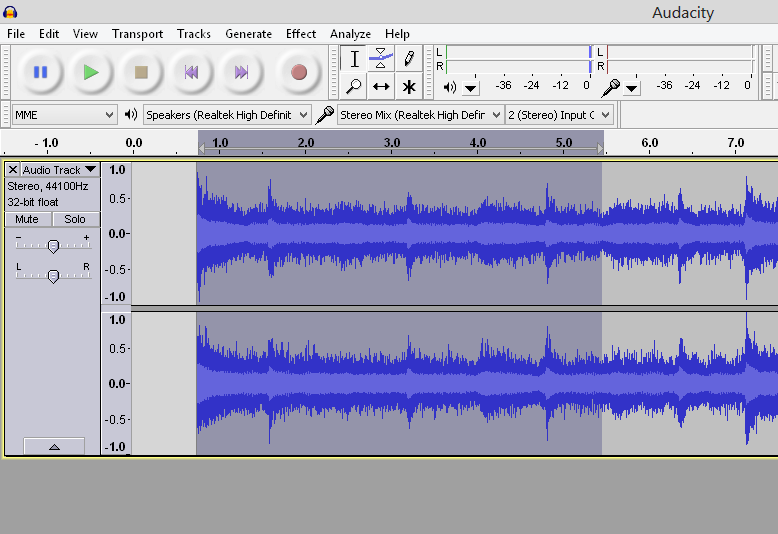 You can then loop that part by pressing shift + space. Press space to stop it.

That's the way to do it - learn the solo in small parts, combining the learned parts in pairs and eventually in fours, sixes, eights etc. until the entire solo is memorized at that speed.

And of course, there's nothing wrong with referring to the tab along the way, so you can get your bearings on the neck. But try to use your ear as much as possible to work out the solo. Relish the challenge! It will benefit you in the long run.

Once you have the solo memorized at the slow tempo, it's simply a case of using a metronome to gradually build up speed. I use increments of 10 BPM, only increasing the tempo when 100% confident with the current tempo.

If you want to do more complex things like reduce the sound of drums and vocals, change key and create higher quality slow-downs, I'd highly recommend Song Surgeon. It's specifically designed to do what we've looked at, but much more easily and intuitively. Plus it has higher slow-down/key change quality than Audacity and other DAWs.

Get into the habit of following this process for any song/part you want to learn. Practicing listening to what you learn, as you learn it, will train your ear to be more responsive to music.

You'll find that, the more you do it, the less you'll rely on visual cues (such as tab or video tutorials), and in turn you'll have a better ear for picking up music for which tab isn't available.

How to Learn Guitar Licks ►