How To Use A Metronome For Maximum Progress

Metronomes are like an auditory form of Chinese water torture to some, but they are an indispensable tool in developing good timing and increasing speed. There are a number of ways to make your metronome drills more engaging, efficient and rewarding, which is what this article is all about.

The question of how to use a metronome may seem a bit "noob", but it's about more than simply being able to set the BPM (beats per minute) and press "start". It's about getting the most out of your metronome as a practice aid so you can become a better musician.

There are two main functions a metronome serves. Its primary function is to help you keep time and improve your timing. Its secondary function is to increase your speed. Without good timing, speed will lose all its grace.

First, Get Yourself A Good Metronome 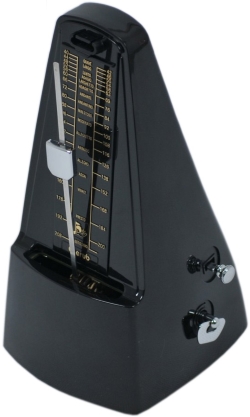 There are now a few ways to get access to a metronome. There's the traditional "tick tock" mechanical metronomes such as the Cherub WSM-330, which has a certain ornamental charm!

Then there's the battery operated, digital kind, which offer additional functionality such as tap tempo, click samples and tuner, e.g. the Korg TM50.

If you own a smart phone or tablet, you can get metronome apps for your device.

And of course, many free online metronomes exist, such as Jamplay and the rather proudly named Best Metronome.

I personally stick with the app and online metronome as I like to keep as much on a single device as possible.

Whether strumming or picking, you can use a metronome to help you improve the accuracy of your timing. Good music isn't just about playing all the right notes in the right order!

First, before you work on your timing, you need to know what you want to play. This could be a lick or strumming pattern you've heard or have come up with yourself. Start with the notes/chords and just play them out as they come.

You ideally need to know the tune by heart before you work on the timing, so you're only focusing on one thing at a time. If it's a solo piece, break it up into short note sequences and work on each one individually.

Once the sequence of notes/chords is memorised, set your metronome to 60 BPM (you can always slow it down if needs be).

Most instrumental parts are played using what are known as eighth notes, where we typically play/pick two notes per beat. In the diagram below, each square represents a picked note (or multiple notes together)...

In the audio below you'll hear an 8 beat/click intro and then the eighth notes will come in.

Tip: if you're writing a new lick, try starting it before the first beat of the measure (e.g. the last & before 1) for a more natural "lead in" effect.

The aim at first is to "lock in" to that timing is closely as you can, ensuring the notes "inbetween" the beats (the &'s) are spaced correctly. It's just as important to be accurate at slow tempos as it is quicker tempos.

Now, if it's a lead solo you're playing, obviously not every note will last the length of an eighth note. For example, some notes will be held longer than others. Depending on the piece you're playing, you'll want to experiment with holding quarter notes - that is, half the time of eighth notes - one note per beat (we simply remove the "&" from the eighth notes)...

Or even longer, such as half notes, which last half a measure...

And whole notes, which last the entire measure...

These are the basic timing ingredients in most songs. They're called note values (whole, half, quarter, eighth notes).

Let's see/hear an example incorporating a mix of note values...

We can also use what are known as dotted notes to increase the duration of the basic note value by half. This creates subtle differences in timing as it places notes "off the beat", giving the lick a different feel. Take a listen to the same lick above but this time using dotted notes...

So do experiment with holding notes like this, starting and ending off the beat (on the &).

There is another commonly used note value we've left out - sixteenth notes - but we'll come to that.

Being aware of the different note values that make up a solo, lick or pattern will make your metronome practice more productive.and efficient in terms of developing accurate timing.

There are other timing elements to know about, such as different time signatures (e.g. 3/4, 3/3), stops, triplets, syncopation, shuffle notes etc. and I'm working on a course that will take you through all these elements. But for now, just focus on getting to know these core note values using your metronome.

How To Increase Speed Using A Metronome

An error many guitarists make when trying to play fast is they increase the metronome too much, too soon. They don't give their fingers the chance to grow in to the lick or pattern.

The first thing to note is that you should only increase the BPM when you can play flawlessly at the current tempo. When I say flawlessly, I mean zero mistakes, play-it-in-your-sleep kind of flawless. Have discipline and it will pay off sooner than you think, especially if you abide by...

Start off as slow as you find comfortable (40-60 BPM is the standard) and, when you're happy with your performance at that tempo, notch up the metronome by just 10 BPM, no more, no less.

The significance of using increments of 10 is that it's subtle enough to not throw you off, yet big enough that it won't take long until you're at 100, 140, 180 BPM.

Consistent, incremental changes are the key to building speed with metronome.


The Sixteenth Note "Roll Back"

Roll back the metronome to 60 BPM (or 40 if that's more comfortable) and start playing four notes per beat...

As we're now cramming double the number of notes between each beat, it won't be long before it gets really challenging. Initially aim for 120 BPM using sixteenth notes. That's a solid pace for picking. Throw in some legato and you'll be able to push it to 160 even 180.

So the "secret" to playing really fast like these shredders is to roll the metronome back to where you started with eighth notes and follow the same "rule of 10" with sixteenths. This means you'll be able to play confidently and accurately using both eighth and sixteenth notes.

While the above processes were very structured, there's nothing wrong with a bit of freestyle experimentation now and again.

As you're learning a scale pattern, for example, try this simple exercise...

Test your knowledge of the scale pattern by setting your metronome at a comfortable tempo and playing randomly around the pattern. Use the note value exercises from earlier and chop and change between them when the feeling takes you.

Use the "rule of 10" to speed up and before you know it you'll be dancing around the scale pattern in very spontaneous and improvised ways. It's also a great way to develop finger dexterity, muscle memory and pick-hand co-ordination.

As mentioned earlier, these are only the core metronome practice elements. I'll be expanding on this in the future, but I hope you make the effort to include the metronome in your future practice sessions. It will pay off.