The guitar interval exercises in this lesson will combine elements we've learned so far in the guitar scale exercises series, so you might want to take the below lessons first (although you will naturally pick up these techniques as you work through this page)...


This lesson is all about moving through scales in a series of repeating intervals, often called intervallic playing. Not only is this a naturally musical way to navigate scales, but it's also great for testing and improving your fret and pick hand co-ordination. It'll also cement any scale pattern in your mind as you'll be dissecting it in different ways.

The bigger picture for all this is to combine the different ways of navigating scales through the exercises we've looked at to make your soloing free flowing and fluid.

Scales are built from a series of intervals - the spaces between each note. We can take any scale pattern we know, choose an interval (e.g. 3rd, 4th, 5th etc.) and then play that interval on each note of the scale.

For example, take the major scale in its first position (although this technique works for any "box" pattern)...

Instead of seeing the scale as a straight sequence from note 1 through 7, we can break it down into major 3rd and minor 3rd intervals, depending on which note in the scale we start from.

Start with the root (1) note, skip over the 2 note immediately after it, and we have our first major 3rd interval as follows...

Next, from the 2nd note in the scale, we can again skip the next note and play a minor 3rd interval to the 4th note.

So all we're doing is playing from each note to the next in pairings of either a major or minor 3rd interval.

Tip: Break the sequence down. Start with the E and A strings and repeat the sequence on just those strings. Then gradually add the other strings to the sequence one by one until you have the full pattern nailed.

Note that we probably wouldn't use an entire sequence like this in a solo. What's more likely is that we'll play short bursts of these sequences mixed with other phrasing techniques. However, being able to play a scale from bottom to top (and vice versa) like this is a good general exercise.

Once you have the sequence under your fingers, try playing it on different roots, at different positions on the fretboard.

Working down the pattern...

We can also move in larger intervals, such as 6ths...

Tip: These would sound great as a sequence of double stops. That's where we play the two strings together instead of one after the other.

And don't forget octaves. This exercise will help you memorise octaves across multiple strings, again using the major scale as our reference...

In a moment, I'll show you how to make these guitar interval exercises sound more musical by combining them with other movements.

Let's take a wider major scale pattern, using three notes per string and go back to moving in 3rds...

These wider patterns also allow us to use descending interval patterns like the following (note, this exercise makes use of vertical "rolls", a technique covered in a previous lesson). This time, we're moving down a 3rd interval from each note... 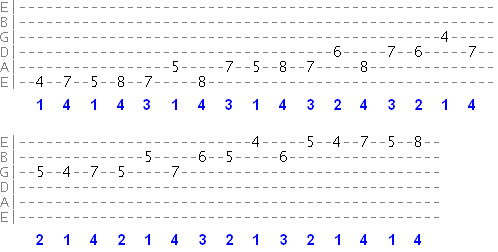 So again, depending on the position of the next note in the sequence, we're moving in minor or major 3rd intervals, from each note in the scale.

Try other interval movements like we did with the major scale. This is a great way to cement knowledge of any scale pattern in your mind.

We can make these intervallic movements sound more musical (and the exercises more challenging) by adding in other notes.

For example, we could move in 3rds like before, but this time add in an extra note. Here I'm playing a 5th interval before each 3rd interval. Essentially, that means we're playing a triad (whether major or minor) arpeggio for each note in the scale. Difficult to explain, so work through the tab below for a better idea.

We could add in another note, giving us more of a run type pattern, but still keeping those repeating 3rd intervals throughout the sequence. In the below example, we play a 5th interval and then descend down to the next note in the sequence...

Try combining the exercises we've looked at in this lesson with other scale navigation and phrasing methods.