Vibrato is a really simple and effective way of giving your solos feeling, emotion and virtuosity. Vibrato on guitar involves bending and releasing the fretted string in repeating pulses. It's a way of allowing held notes to decay more gracefully, punctuating your soloing phrases and making that target note really sing!

Take a listen to the below audio clips. The first is a simple phrase which uses no vibrato. The second is the same phrase with vibrato: Clip 1 - no vibrato  /  Clip 2 - with vibrato

As you can hopefully hear, the second clip is more emotionally involved simply by adding vibratos to the held notes.

Although simple in theory, guitarists often struggle with the physical application of vibrato. Done sloppily, it will make the note sound out of tune. Done correctly, it'll make the note sing.

Even if you think you're confident with vibrato, this lesson will help perfect your technique and encourage you to squeeze as much emotion as you can out of those held notes.

Take a look at the below video for a great introduction to vibrato in a blues context... 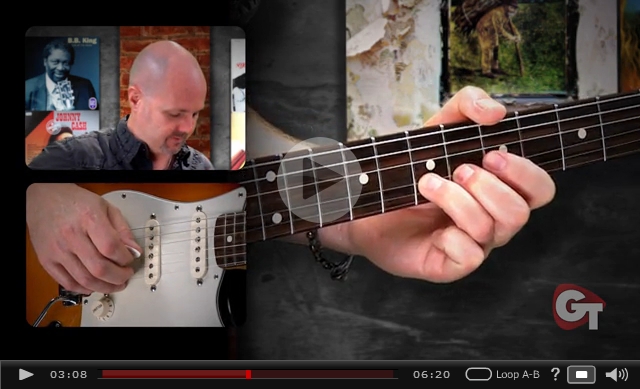 When you start on or approach a held note in a solo, it's important to first be aware of how long that note is to be held. This will, in part, determine how quickly you apply the vibrato (if at all).

A good general "rule" is to let the note ring out in its natural state before you apply the vibrato. Typically, you'll only want to let it ring for a fraction of a second before the vibrato.

The reason we do this is that, when a vibrato is applied, we are actually bending slightly off the note's natural pitch. By letting the note rest before the vibrato, we ensure the listener can hear a firm target note, even if it's a mere hint, putting the subsequent vibrato into a more defined context. That's one of the "secrets" to good sounding vibrato!

Begin with this simple exercise.

Apply the G string at the 7th fret using your ring (3rd) finger (it can be any fret really, but just for the sake of example...).

Pluck and hold the note in its natural state for a brief moment and then gently begin to pull the string downwards, bending the note by about half a semitone. As soon as you reach the peak of the bend, release it, just as slowly, back to its relaxed position. Repeat this motion in a constant, pulsing rhythm so each bend and release is the same length.

Note that, in tab, vibrato is either marked with a v after the held note, or a more formal

symbol (sometimes shortened to ~). Often, however, vibrato won't be marked on a tab and it's up to you when you apply it.

The next logical step is to get all our fingers involved in applying vibrato, since there'll be times when your other fingers will land on a held note in a solo.

A note about the 4th finger: The pinky is the weakest of our four fingers. To support this finger when playing a vibrato, get your other three fingers behind it, pressed on the string for support as you bend (see below)... 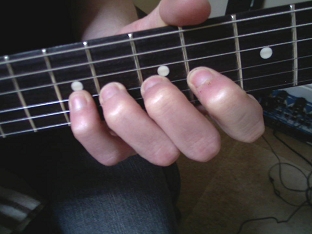 So, on to the index finger vibrato. The same motion applies no matter what finger you use. Keep the bend-release pulsing evenly and smoothly...


We also need to ensure we're physically comfortable applying a vibrato on all six strings of the guitar.

Try something similar for the D and B strings (we've already done G).

And finally the high E string. As pulling the string down would take it off the edge of the fretboard, we need to instead bend up for a high E string vibrato...

Once you've mastered the basic guitar vibrato technique, you can start to experiment with using it in different ways.

For example, we might want a more jittery, lively vibrato as follows...

Still ensure that the bend pulses are evenly timed and the "width" of the vibrato is consistant.

We can also use bends to create wilder vibratos for a more virtuosity (watch Zakk Wylde for some great use of wide vibrato). For example, the video below shows me playing a whole step vibrato. All we do is bend to the desired pitch as usual and then release and re-bend in pulses to create the vibrato...

You can also use vibratos to move between two pitches within a scale. For example, let's say our landing/target note was a major 3rd in the major scale. We could use a vibrato to create a half step movement between the major 3rd and 4th...

Or a whole step, in this example between the flat 7th and root of the minor pentatonic scale...

Get into the habit of applying vibratos to those held notes and make them sing! Try also mixing vibrato with other lead techniques.