Hi, I'm Jean from Paris and really appreciate your lessons!

I'm rather confused as to which scale(s) I should apply over "Sweet Home Alabama" (Chords D - C - G).

According to my feeling I would use Dminor pentatonic with blues notes. What is your feeling i.e. what possibilities are there?

Thanks in advance for your help.

Try also adding in the major 3rd to that minor pattern over the D major chord as follows...

Remember, as it's a major key progression, you can also use major pentatonic (position the 6th string root of the following pattern at the 10th fret)...

Just as we can add blues notes to minor pentatonic, we can also colour major pentatonic in a similar way...

To do this, simply move the major pentatonic pattern to a G root when the chord changes to G major, e.g. the 15th fret (or 3rd fret if you want to play in the open position).

As for other scales, the progression used in Sweet Home Alabama is essentially written in D Mixolydian (whether intentionally or not).

How can we know this? Because it moves from the tonic or "home" major chord (D major) down a whole step to another major chord (C major).

This whole step major chord relationship implies Mixolydian modality. You can learn more about identifying modal progressions in the modes section of the site.

In short, Mixolydian would work over the sequence, with the 6th string root (1) note of the following pattern at the 10th fret...

Below I've recorded an example solo which makes use of the scales mentioned above.

Now, usually your solos won't be this calculated (i.e. you won't necessarily set out to cover all possible scales), but hopefully it'll show you how these scales can work over a I - bVII - IV progression.

I've broken each section down by scale in the tab below (John, I've highlighted the b6 for you)... 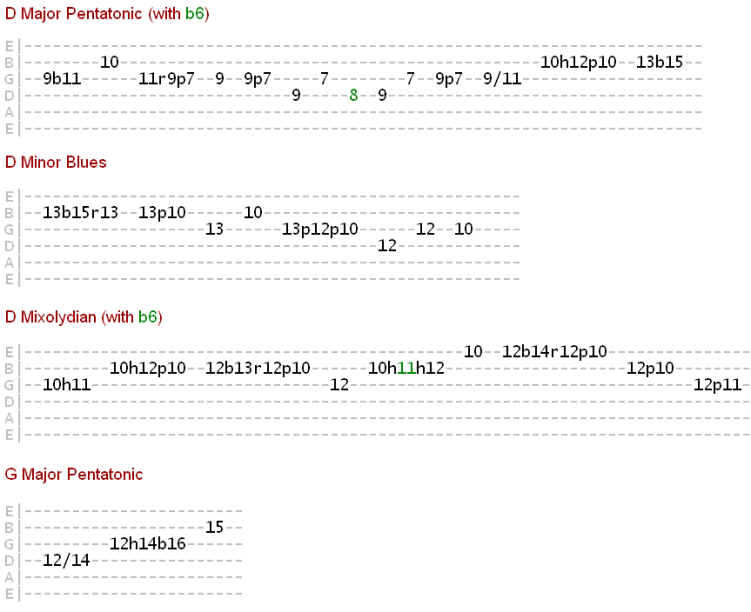 ...and the tab below shows the last section of the solo which demonstrates how you can use simple, two-string chord harmonisation for that bluesy/country feel...