Quickest Way to Learn the Notes on a Guitar

Learning the notes on a guitar shouldn't take long (as little as a week) if you break it down in the way I'm about to show you. It's one of the first theory based exercises every guitarist should accomplish, after learning the fretboard basics.

While it's important to learn the notes on all six strings, many find the lowest three strings (E, A and D in standard tuning) the most crucial to memorize.

Why? Because these are the "root strings" from which we build the most common chord shapes and scale patterns. You can use these bass strings as reference points for playing a chord or a scale pattern in the right key.

Grab your free fretboard notes print sheet if you prefer to have a hard copy.

Step by Step Process for Learning the Fretboard Notes

First, we need to understand what notes are and how they are written.

In their most basic form, notes are the pitch of a sound. For example, play any string on your guitar at any fret and it will sound a note.

There are three types of note - natural, flat and sharp.

For example, an A natural note would simply be written as A.

An A flat note would typically be written as A♭ or Ab.

An A sharp note would typically be written as A♯ or A#.

If we were to visualize the flat and sharp notes in relation to the natural note, we would see the natural in the middle with the flat on the left and sharp on the right...

We also use the terms flat and sharp when referencing a change in pitch.

For example, let's say we had a sequence of notes and we wanted to communicate that one note had changed from its original position.

If the note has moved down in pitch, we'd say it's been flattened (to flatten a pitch).

If the note has moved up in pitch, we'd say it's been sharpened (to sharpen a pitch).

Here's how we'd visualize these changes on the fretboard, with N being your starting note (on any string)... 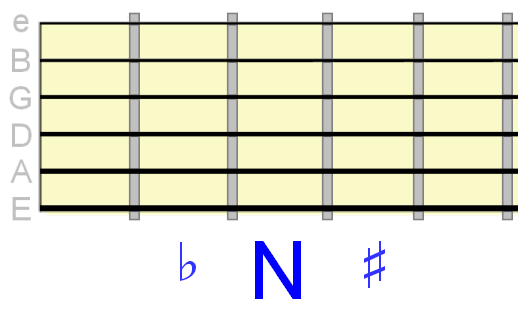 So as well as flats and sharps being a part of individual note names, they also tell us where notes have moved in pitch.

Just like on piano, there are 12 notes in total on guitar, that make up what is known as the chromatic scale. This means for every 12 frets on the guitar, starting at any fret on any string, you are covering the entire range of notes. Starting on the note A...

The note after G♯/A♭ will be the note A - the sequence repeats every 12 notes. This 12 note sequence is known as the chromatic or 12 tone scale.

The pitches that have sharp and flat notes are known as enharmonic. A♯ and B♭ are the same pitch (they are enharmonic), as are C♯ and D♭ etc. Which one we use depends on a few factors and you will learn what these are as you progress.

Contrary to common knowledge, there are instances where you would write the notes C and F as B♯ and E♯ respectively, but we'll come to all that later. All you need to know now is that the above is the natural sequence of notes to memorize when we apply them to the guitar fretboard.

On the Guitar Fretboard

Now all we need to do is fill in the gaps with the sharps/flats from earlier. Again, don't worry about whether to use a sharp or flat at this stage, just memorize the positions of these enharmonic notes...

Now on to the A (5th) string. Again, memorize the natural notes first, starting from the open A string...

I think you get the idea now! Fill in the flat/sharp gaps...

So that just leaves the D, G and B strings.

The below diagram shows the completed fretboard with the fret numbers beneath (O is for open string)...

You can download a larger, printable version of this diagram here.

To test your knowledge, try the following exercise. Pick any note in your head and see if you can locate it on all 6 strings. At first, you'll be slow, but the more you test yourself like this, the quicker and more "automatic" your note identification will become.

You can also try this fretboard trainer and see what score you get. Try and beat that score on a daily basis.