Up until now, throughout the chord progressions section, we've been looking at major key chord relationships in relation to a major tonic chord (I).

Now let's see how we can use this very same scale to build minor key relationships, which require a new tonic, a minor tonal centre...

The vi chord therefore becomes i (lower case numeral for minor chords), but the interval relationship between each chord in the scale remains intact from that point. So if vi becomes i, then the next chord, vii, will become ii, and so on.

This is the new scale we can build based on that new minor tonic...


So all we've done is reposition the scale in relation to the 6 chord becoming 1. The intervals of the scale continue from that point.

This means the old major tonic chord has now become the III (mediant) chord of the minor scale.

However, they still keep their names based on their position relative to the tonic with the exception of the 7th degree, which is called the leading tone chord in a major key, and the subtonic in the minor key.


If we were to play through that scale, from a tonic of A minor, here's what we'd get...

What this also means is that the chord variations we learned for the major key chords (e.g. turning major into minor, extending chords etc.) will also apply for minor key positions.

For example, we learned that the V chord of a major key is naturally a dominant 7th chord. This also applies when it becomes the VII chord in a minor key.

The only difference is we've changed the position of the tonic, which puts these chord relationships into a different context.

If you look at the relationship between the new minor tonic and the III chord of its scale, we can see that this was the same as the I - vi relationship in the major key scale.

The interval between these two chords are known as relative major/minor.

Understanding this key relationship will allow you to execute what are known as "relative key changes", allowing you to switch into the minor/major key scale in the same song.

This relative interval is always 3 semitones apart, which is the equivalent of 3 frets on the fretboard. You should already know this from learning the interval between the I and vi chords from previous lessons... 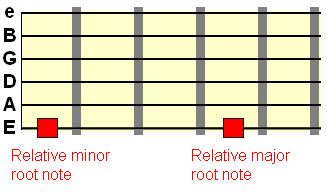 And this relationship also applies to A and D string chord root notes.

So if you're building a progression around a major tonic (I), try resolving to the vi of that progression and you have the option to continue the song in a more downbeat minor key.

An example would be...


Similarly, if you're building a progression around a minor tonic (i), try resolving to the III of that progression and you have the option to continue the song in a more upbeat major key!

So the vi chord of the major key can become the relative minor tonic of the new minor key progression.

Of course, you can then resolve back into the relative major key any time you want.

This is all about keeping your options open. More on using relative key changes effectively in a later lesson.

As with the major key examples I showed you throughout this course, this scale is by no means the limits of our minor key songwriting, rather it's the foundation for more complex minor key progressions we'll build in future lessons.

Let's use that minor chord scale to build some simple minor key chord progressions. Remember, a large part of playing chord progressions is knowing the many different chord forms you can play. This is covered in the chords section. The chords I show you below are just typical barre chord or open position examples...


As mentioned before, the variations/substitutions you can apply to these chord positions works in exactly the same way as it did with the major key scale. For example, as the major key iii chord has now become the minor key v chord, we can apply the same variations to this v chord as we did the iii. One variation is to turn it into a major chord (v - V).

More on minor key variation in the coming lessons.