This lesson we'll be expanding on the core guitar strumming patterns we learned in the first two lessons of this strumming series.

We're now going to look at some more advanced strumming patterns to further develop our rhythm, timing and attack. Use the video, diagrams and backing tracks to get your bearings and test your strumming ability.

Remember, always start slow using a metronome (don't be impatient and jump ahead of your current ability!).

In the previous lessons, our down-up strumming patterns have been based around a constant and equal separation of beats.

We discovered that by "skipping" beats, we could make this constant drone more interesting. However, using the same process, there's another type of constant down-up strumming that immediately injects life into your rhythms.

It makes use of what is known as syncopation.

First, let's hear the difference, starting with the one we already know...

Now listen to the modification of this...

Sounds quite a bit different, doesn't it? Basically, the down strums are spaced exactly the same as the first example, but the up strums (hitting the treble/higher strings on your guitar) are pushed forward slightly, so you get a delayed effect:

So we're leaving that up strum to the very last moment, followed immediately by a downstrum, with no breathing space like with the first pattern. First, work on keeping those down strums constant. Add in the up strums, still focussing on the down strum marker points. It's easy to lose the timing at first, so be patient and disciplined!

Now, what's great about this particular rhythm is that it gives birth to so many lively strumming patterns, using the "skipped beat" technique we learned in the 2nd part. Obviously I can't show you every single one, but let's look at a couple of examples.


Remember, the red strums are the skipped beats, but maintain the down-up action with your strumming hand while you miss the strings on the skipped beats. Keep that 4/4 meter ticking over in your head (or tap your foot as you play - a lot of guitarists use their foot as a metronome).

When you start to get more confident with these types of rhythms, you can try strumming patterns that complement faster tempos, like this one (I've left out the helpful aids this time as a little test!):


I think it's time to put these new strumming patterns to practical use, with chord changes over a backing track.

Below is a jam track that uses the rhythm from above and changes chord from D major to A major to E minor (although in the example, I modify these chords to become Dmaj7, Amaj7 and Em7 to make it more interesting). More on chords in a separate lesson!

Now try it yourself!

Mutes add yet another dynamic to your strumming patterns, by interrupting those constant down/up strokes with sharp stops. 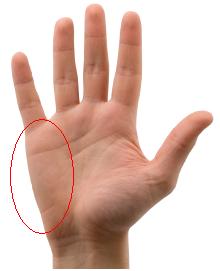 Muting is where you stop a string/note from sounding. The aim is to be able to stop it in time with the rhythm you're playing.

Pick any chord and strum it once to ring out the notes. To mute the strings, simply touch them using your strumming hand. The best part of your hand to use for this is the meaty part below your pinky/4th finger. Exactly the same as palm muting.

Try the simple exercise below to test your timing using down strums and mutes.

If you're struggling, watching this video might help clear things up...


Once you have the basic muting technique nailed, it's time to insert this technique into the strumming patterns we have learned over the course of this series (although, of course, we're by no means limited to these patterns).

It's important to keep your up and down strumming action in the same constant motion and literally add in the mutes. Don't lose your momentum!

Let's start by adding some mutes into the down-up strumming pattern we learned in part 2...


When playing acoustic, I like to bring my muting hand down hard enough so you get a tapping sound. It's a nice percussive touch.

Add in the skipped beats we learned in part 2, and you can see how we're simply adding layers to those foundation strumming patterns...

Don't feel like you must always use mutes and skipped beats in your strumming patterns. Use them only when you feel they compliment the kind of music you're creating. For example, a slow and downbeat song won't necessarily be complimented by the liveliness of skipped beats and muted patterns. Think about context!


Let's finish with a more complex muted pattern and a final backing track.

Now, let's work this strumming pattern through a few chord changes, starting on Cmaj7, changing to D7 and then to Fmaj7.

I hope you found this lesson useful. Obviously I can't show you every possible strumming pattern there is, but I hope I've given you some inspiration to try out your own rhythms using syncopated rhythms and muting - build upon it, develop it and most of all, enjoy it!

Was this page helpful? Please let others know, cheers...