It's worth pointing out that, although I've put fast guitar picking under the heavy metal category, it's a general lead technique, and essential if you want to shred.

The heavy metal genre uses fast picking techniques to their extremes, so it's a useful genre to work with for building speed and endurance.

In this lesson, we're first looking at fast guitar picking as a rhythm technique, using the lower tones of the guitar. This is commonly heard in speed/thrash metal and their derivatives, but also in rock in general.

Tremolo picking goes back to the rock and roll of the 50s and 60s, and was popularised in Dick Dale's surf rock classic, Misirlou...

When alternate picking at higher tempos, angle your plectrum so that it's slightly cutting across the strings rather than flat against them. The idea is to reduce as much obstruction as you can, so also make sure only the very tip of the plectrum is scratching over the string.

Think also about pick gauge. For fast guitar picking, I prefer to use .60mm as it flexes over the strings more easily. Again, the less obstruction the better!

Getting up to speed

Let's start slow and simple on the lowest string. At first, keep the distortion switched off as we want to be able to hear our progress clearly.

As we're going to be speeding up, your pick hand stability is important.

Not everyone needs it, but I find resting the edge of my pick hand (the same part of your hand you use to palm mute strings) on the bridge good for pick hand stability. 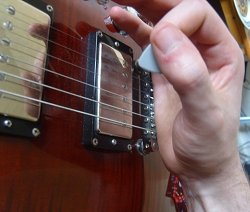 Other guitarists prefer to prop their pinky (4th) finger against the body as a "stabiliser". 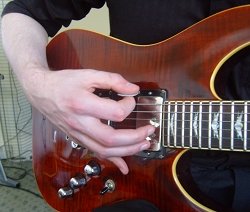 Seee which one (if either) works most comfortably for you.

So, now our pick hand is in place, watch the video below and alternate pick (down-up-down-up-etc.) the low E string at a constant tempo (use a metronome to help). Try speeding up gradually. There's no hard and fast rule for this, you just have to use your judgement on whether you're running ahead of yourself.

Notice how I keep my picking "sweep" tight around the string I'm playing. This is to ensure you don't accidentally hit the adjacent strings.

As shown in the video, you should also practice this same action on the A string above. Beginners especially find the A, D and skinnier strings harder to alternate pick at first as you need to keep your picking "window" tight to avoid hitting strings above and below.

The example above is the essence of 80's and 90s speed and thrash metal. The same tremolo picking technique is also used in shredding solos, but we'll look more at the lead application of tremolo picking in another lesson!

Once you're confident with the core tremolo picking technique and are satisfied with your speed and endurance, it's time to churn out some riffage!

Again, don't jump ahead of yourself. Start just on the low E string again, but this time, try changing fret in rhythm, like in the example below...

In fact, you'll be surprised at just how many thrash riffs solely use that bottom string of the guitar, mostly because it has the thickest, bassiest tone (and it's easy to just hammer out - very little obstruction). Use the entire length of the neck...


Don't worry if at first you're a bit sloppy - a lot of the inconsistencies will be ironed out when you add distortion/gain, but practising clean allows you to scrutinise your speed playing far more honestly.

Tremolo picking across more than one string

Obviously you'll want to be able to use this technique across more than one string, for more intricate melody.

The exercise below makes use of the open A string, but adds in the adjacent strings as part of the riff. It's important to start slow with this to get used to changing string in time. You also have to be very accurate "tapping" those single picked notes on the A string.

Start by playing at the same speed as the slow example and speed up gradually using a metronome.

Hope you've enjoyed this lesson. Remember, heavy metal and thrash are really good for building your speed and strength with fast guitar picking whether you like the genre or not.