In the introductory death metal guitar lesson, we looked at the basics of building a riff, using percussive palm muting and other techniques at moderate tempos.

This part is all about more technical speed elements and complementing "blast beats" commonly found in death metal.

Death metal is schizophrenic, as you know - it can plod through an achingly slow riff and then flick a switch into alternate picking mayhem.

I have to admit, death metal guitar isn't an easy to teach (even if I was face to face with you) because I have to trust you have at least some sense of rhythm and timing here! The fact remains the same though - start slow, and gradually build up speed with a metronome or, even better, use the drum tracks I provide in this lesson!

We'll be looking at 2 core elements in this death metal guitar lesson:

Like in part 1, we're going be playing in drop C. A lot of death metal guitar is played in drop (or standard) B or even lower, but you really need to have at least .52 gauge low E string to make drop B work smoothly, so I thought we'd compromise for those of us with standard gauge strings. You can tune up on the drop tuning page (opens in separate window).

Blast beats are a drumming technique used in most extreme metal genres including thrash, death metal, black metal and grindcore (which drew influence from hardcore punk).

There are two main blast beat tempos, both of which you can hear in this clip.

Now, it's up to you what you play over a blast beat, but we'll come specifically to tremolo picking over the faster beats later on. For now, let's work on the moderate beats using standard picking techniques.

First, take a listen to the 2 blast beats below, each a different tempo. You can download them for backing tracks if you like. Loop them in your computer's media player:

When listening to faster beats, it's easy to lose your sense of timing. Focus on the bass drum, as this is the constant, 1 2 3 4 1 2 3 4 count you need ingrained in your mind.

For example, you could accent the bass drum in the beat by playing a kind of palm muted durge - click to hear

Notice how I inject phrases around that bass drum targeted palm muting. It's up to you what you use for this, but the techniques in part 1, such as single string phrases or sliding phrases, can be used around this palm muted base. Experiment!

You could also work along side both beats in the blast beat - This means, for the guitarist, a pick stroke on every hit of the bass and snare drum. To accomplish this at higher speeds (e.g. blast beat tempo 2 above), you'll need to use alternate picking.

Remember, it's up to you whether you palm mute those pick strokes or leave them open. Both have a different effect. My advice? Mix it up!

The drummer will often use double-bass, which might sound something like this. If you spend time working on the regular blast beats from earlier, the addition of double-bass shouldn't put you out of time, as it's only extra bass beats being added to the original tempo. Keep that 1 2 3 4 1 2 3 4 count in your head throughout.

This technique was born out of speed/thrash metal, and both genres push it right to the limits of speed and endurance. It's mostly used alongside the drummer's blast beats and these elements together create a frantic, chaotic yet controlled atmosphere.

So, just to recap - we're using alternate picking, down-up-down-up-etc. at high speed. The "secret" to pulling this off at break-neck speeds is to relax. Don't tense up your picking wrist or hand, just learn to gradually speed up those down-up strokes whilst keeping in rhythm. Easier said than done, I admit, but there's no other way to explain it. The metronome is your friend.

Tip: For support, rest the edge of your hand (the same part of your hand you would usually palm mute with) on the bridge of your guitar - just find a spot near the upper corner, towards you. With your hand rested there you can pivot over this point, almost like you've gone crazy and nailed your hand there (not advised). 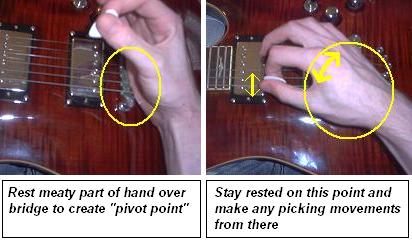 Hear a couple of examples:

Make sure the pointed end of your plectrum is only just showing past your thumb. This allows you to just scrape over the surface of the string without obstruction.

Some guitarists like to angle the plectrum slightly so they're cutting across the string with the side of the pick. Again, this is to remove as much obstruction in the picking sweep as possible.

The picking sweep itself, either side of the string, should be as small as possible.

The timing will come and, if you use a metronome to gradually build up speed, you'll be surprised how fast you can reach your playing goals with death metal guitar.

Let's try a couple of tremolo picking exercises using the lower frets of the guitar.

We'll start with a rather simple riff using just the bottom two strings. The tricky part is changing note (fret/string) whilst maintaining the same constant alternate picking timing. Increase your speed slowly (I recommend increments of 10 BPM) and all it takes is time and persistence!

Now let's try using the bottom 4 strings in a riff - this means you have to switch across more strings at the same time as alternate picking in rhythm, but it allows you to create more dynamic riffs, mixing high and low tones across the fretboard.

You can also use fast alternate picking over dyads (two notes/strings played together) such as power chords. This creates more melodic riffs without sacrificing the brutality of this rhythm technique.

When alternate picking over two strings at the same time, a common death metal guitar technique, you obviously have to widen your picking movements. You also need to block out the unwanted strings by resting one of the fretting fingers over the unwanted strings and effectively muting them.

Try the exercise below, it includes the use of major and minor diads. I've placed red markers on the tab to help you keep time (count: 1 2 3 4 - so it's one count every 4 pick strokes)...

Remember: you can use the same technique with palm muted strings so you get a thicker "machine gun" effect. Mix muted and unmuted riffs to make your death metal guitar more interesting and progressive!

Another technique that really complements the violent rhythms is using palm mute "blasts" (which we touched on in part 1), often in groupings of 3 alternate picking strokes (known as triplets) amidst a regular down picked, palm muted riff:


The idea is to try different combinations of these blast picking rhythms, as they can become rather cliche. Another typical down-up-down picking rhythm is to go all out and repeat the triplet sequence as follows:

Put your death metal technique to the test

Hopefully, from both death metal guitar lessons, you now have the solid foundations to build on and fuse together these core techniques to create your own riffs.

The great thing about metal is the musical freedom you have to experiment. As long as you maintain that raw aggression and a good level of rhythmic accuracy using the techniques we've looked at, you'll be able to write dynamic and engaging death metal guitar.

Was this lesson helpful? Please let others know, cheers...